Supporters of Friern Barnet People’s Library in Barnet, North London, are to return to court at 09:30 on Monday 17 December as Barnet council seeks possession of the building and the surrounding green land. 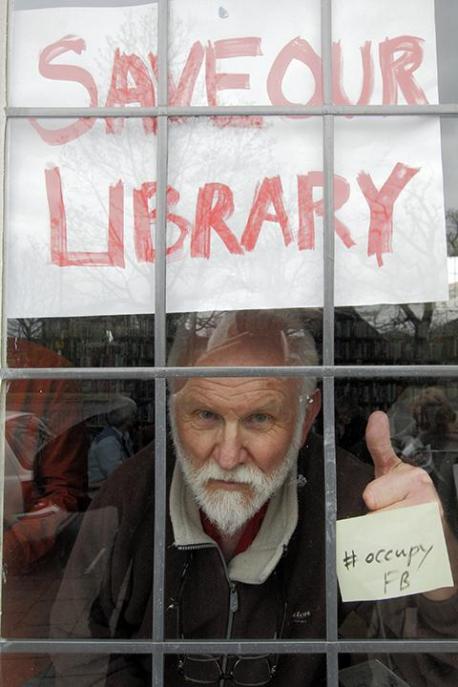 Supporters of Friern Barnet People’s Library in Barnet, North London, are to return to court at 09:30 on Monday 17 December as Barnet council seeks possession of the building and the surrounding green land. [1]

"Join us in Barnet and show Barnet council that libraries and communities matter more than profits for big business."

Friern Barnet library closed in April despite the protests of local residents. The sudden closure was seen as part of Barnet council’s plan to outsource public services in the borough, and to profit from the sale of the property.

In September the library was re-opened by the Occupy movement, local people and experienced librarians in protest at the library’s closure and to provide a programme of community events as well as essential library services. 8000 donated books line shelves that were cleared by the council. The ‘People’s Library’ project is a protest and an emergency service; volunteers do not see it as a longterm solution and are united in calling for the re-institution of a publically-funded, professionally-run library at the Friern Barnet site.

Sinead Burke, a drama teacher resident in Barnet, volunteered to run baby and toddler sessions at the library. She explained "I chose to offer my time to run this as I attended 'Rhyme Time' sessions at the library when it was council-run [...] I am disgusted that taxpayers will no longer have access to activities for their children in Friern Barnet and commend those who are working so hard to save our library".

Local architect Maria Persak-Enefer applied to have the Friern Barnet library building recognised for its “significant contribution to the borough’s heritage and character”. On 10 December confirmation was received that the library will be added to the Schedule of Buildings of Local Architectural or Historic Interest and the Register of Assets of Community Value. Although these listings will not prevent sale of the building, they may restrict development. [2]

Investment in jobs, alternatives to austerity, and making the shift to renewable energy sources were hot topics at 'Shift: an economy for the 99%', a recent event held at the occupied library. Green Party leader Natalie Bennett and Sara Ayech of Transition Towns joined more than 60 educators, activists and community members to explore constructive resistance to current policies.

Residents’ groups claim that Barnet council is aggressively pursuing an undemocratic outsourcing programme incongruously dubbed 'One Barnet'. Citing a "relentless drive for efficiency" [3] as a key principle, this programme will see the privatisation of approximately 70% of Barnet's public services, a move expected to result in large scale redundancies.

On 6 December a council meeting at Hendon Town Hall, intended to rubber-stamp the handover of ‘back office’ services to Capita, was disrupted by local activists. Protesters succeeded in derailing the meeting and held their own public assembly in the committee room. The Barnet Alliance for Public Services (BAPS) announced on 11 December that a Judicial Review of the One Barnet programme is being sought. [4]

Vicki Morris, of BAPS, encourages grassroots groups everywhere to resist outsourcing and defend public services: "It is time the spotlight was shone on these companies. This situation is being repeated all over the UK, as outsourcing companies line up to take over services. They offer cash-strapped councils promises of savings that often never materialise. Meanwhile, they exploit council employees to turn a profit".

Those protesting the sale and development of Friern Barnet library and its surrounding green space have the following clear message for the council:
“Library campaign groups working with the Occupy movement and the local community share a common aim: that Friern Barnet library should be re-opened in the existing building by Barnet council and preserved as a fully funded library and community space with the direct involvement of local people in the decision making process. The occupation of the building is a direct action that has highlighted the massive community support for Friern Barnet library, and has challenged not only its closure but the entire One Barnet programme and the privatisation of our public services in general.”

The group has issued a call-out for support during the court hearing beginning 09:30 on 17 and 18 December at Barnet Civil and Family Courts Centre, St Mary's Court, Regent's Park Road, Finchley Central, N3 1BQ.