After new year's eve prison demo's outside three of London's prisons, it was agreed by a few people that it would be good to show solidarity in the same way to refugees and migrants held in a 'detention centre' prison by Heathrow airport on New Year's Day.

Migrants can be held for many years for the "crime" of crossing a border, and for most of those there for the long-term, are there with no end to their detention in sight.

January 1st has also become the date that many are given as a date of birth when no records exist. January the 1st is therefore many migrant's official 'birthday', and a solidarity action was organised on this day with people from different networks meeting in the afternoon and heading to Harmondsworth Detention centre to make noise and express solidarity with those inside. 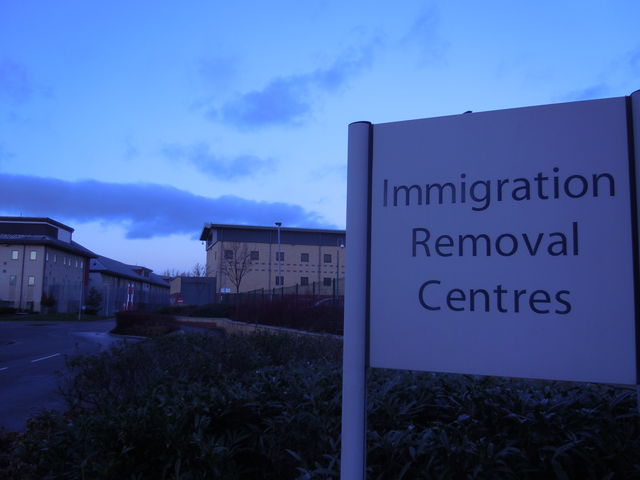 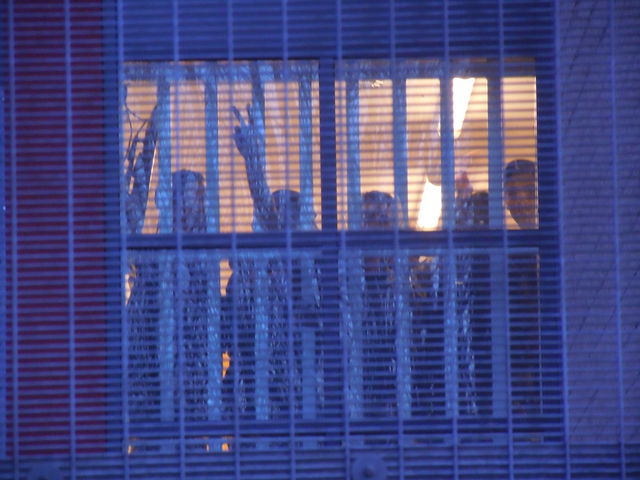 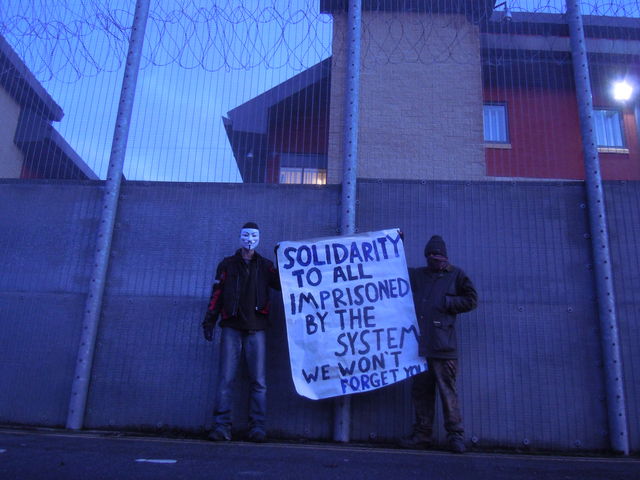 Activists from No Borders, Croydon Migrant Solidarity, Occupy London, and a local community group against airport expansion, came together to express solidarity to the refugees and migrants in Harmondsworth Detention Centre on New Year's Day for the first of more regular demonstrations since the death of Prince Ofosu in October last year (the 7th death at Harmondsworth since it opened) brought many people there to express solidarity and support people with case work and more practical solidarity since.

The short notice and possible new year's hangovers meant that less people were there than at the November demonstration but spirits were high and chants of "freedom!", "solidarité!", "azadi!", "hurriya!" as well as "screw the screws!" and "our passion for freedom is stronger than your prisons!" rung out over the walls as the fence was kicked and people inside waived and made peace signs from the window before the guards could cover it with a cloth.

Two activists there held a banner that read "Solidarity to all imprisoned by the system - We won't forget you" and posed for a photo under the window where the guards were blocking the window, shortly before heading off from the grassy bank opposite the exercise yard and walking around the detention centre calling out to people in other rooms and being met by waves back as those inside were jubilant to see people outside their windows showing solidarity.

Freedom for all trapped by the system!!

For a world without borders!!

Also Croydon Migrant Solidarity have ongoing practical solidarity with people detained by the immigration system and can be contacted at croydonsolidarity @ riseup.net