To propose items for the agenda, request accommodation in London or for
more info please contact

“There is one common struggle against those who have appropriated the
earth, the money, and the machines.” ― Voltairine de Cleyre

The UK is hosting the G8 conference in Fermanagh on 17-18th June in the
North of Ireland. The Stop G8 network has come together to oppose it and
to take action against capitalism.

The G8 is a meeting of the leaders of the eight 'most powerful' nations,
held annually. It will be used to discuss strengthening international
capitalism and as a photo opportunity to give the impression of benevolent
leadership. Any real solutions to the problems we face can't involve
institutions as undemocratic as the G8. Eight professional politicians
could never represent the 7 billion inhabitants of the world. The real
problem is capitalism; in order to fight austerity, exploitation and the
destruction of the planet we have to challenge the G8 leaders instead of
lobbying them.

Stop G8 has already made an international callout for participation in a
week of action from the 10th-14th June in London, leaving space for a
mobilisation in Ireland at the summit venue if Irish activists call for
it, and for autonomous anticapitalist actions to be taken in the run up to
the G8 on May 1st. We are also planning a programme of cultural events to
coincide with the week of action and convergence space in London.

We are holding a Carnival against Capitalism in the West End of London on
J11, under the slogan "One Common Struggle". There are already mass
actions planned on the 13th and 14th of June and we hope that affinity
groups will come forward and propose more

We need your help to make all this happen!

"The real problem is capitalism; in order to fight austerity, exploitation and the destruction of the planet we have to challenge the G8 leaders instead of lobbying them."

But this bit is dodgy:

"Any real solutions to the problems we face can't involve institutions as undemocratic as the G8. Eight professional politicians could never represent the 7 billion inhabitants of the world."

The point isn't the numbers. I'm an anarchist, that means I don't want anyone to represent me, I don't care who they are or how many there are of them. I don't want any state institutions trying to "solve" my problems, even if they were the most democratic you can imagine.

Stop G8.
Stop capitalism.
Stop the state.
Stop anyone who tries to govern me or have power over me.

The assertion that opposition to hierarchy means an opposition to representation has come up in several discussions I've had recently. I don't think it necessarily follows.

Of course representation is a thorny issue - it involves trust which arises (or not) from the political relationship between the represented and the representative. It's difficult to see how its possible to organise with a group of more than ~20 people without some form of representation, especially using the consensus model. Meetings involving more than this number of people tend to (in my experience) develop informal hierarchies (some people more confident/privileged than others etc).

A common strategy to deal with this is to break large meetings down into smaller discussion groups and then have a feedback session, so that quieter/less confident people can get their views heard. This is a very mild form of representation, and yet I've never heard anyone object, because its very clearly an empowering structure and process.

With larger groups, especially those that are spread out geographically, representation can empower those less able to attend meetings because of, for example, childcare or work commitments. The ostracision of parents and full-time workers from some anarchist organisations is very noticeable. When the alternative is not having any sort of input, surely being represented by someone you trust is desirable? Rejection of representation can therefore reinforce the informal self-selecting hierarchies that plague our movement.

I think this is an issue the anarchist movement in this country desperately needs to address if it wants to grow. Look abroad and at history for examples - many very respected anarchists and organisations have accepted the need for representation and found ways to make it work.

My reading of this

"Any real solutions to the problems we face can't involve institutions as undemocratic as the G8. Eight professional politicians could never represent the 7 billion inhabitants of the world."

was that it points out the absurd contradiction between the "freedom and democracy" rhetoric of the G8 leaders and the very real class divisions which exist between the politicians and the populations they claim to represent. Not to mention the other human inhabitants of the world, who they don't even claim to represent and yet are still hugely affected by the muderous neoliberal agenda to be promoted by this summit.

The point is "could never". The numbers just illustrate the absurdity.


Excited about this. Its about time we started fighting back again.

Any flyers for this

Anyone done any flyers for the Carnival against capitalism that we can print off and put up all over London? We need this to be huge. 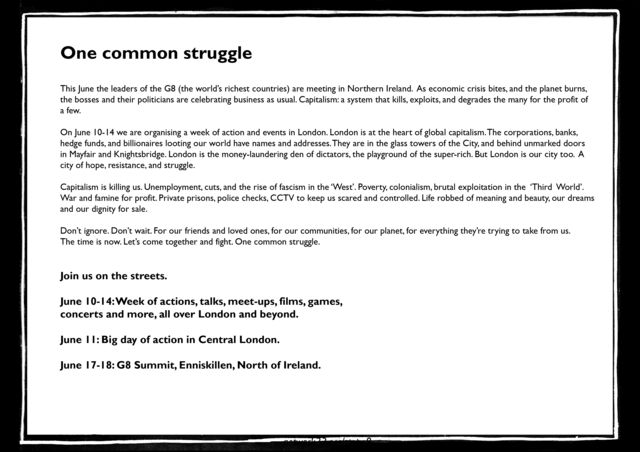 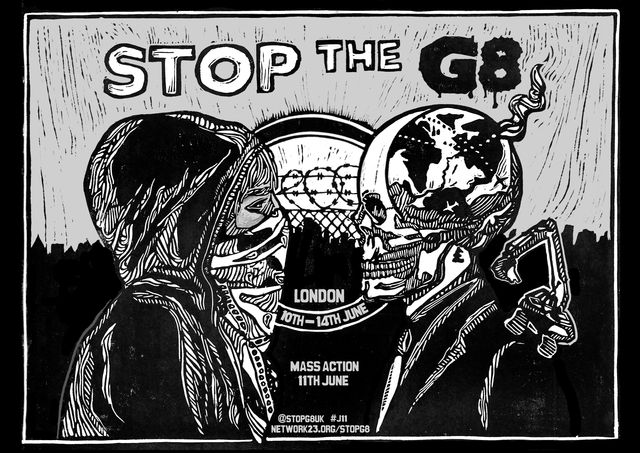 Feel free to print and distribute

Any flyers with date, time and meeting place? Might be helpful to get more people there.

will it just be "anarchists"?

we really need to invite other enviromental/anticapitalist/anti globalisation groups, to organise somthing.

what are the swp planning or the nus?

as much as i hate them theyre useful for pulling out a crowd?

why don't ya argue bout the wording of the flyer until the fucking things over?

fuck the nus and the swp

Why don't you shut your cake hole?