Come to StopG8 gathering this weekend

The StopG8 UK-wide meeting is nearly upon us. With not much more than 2
months to go till the big week, the time to come and get involved is right
now ... 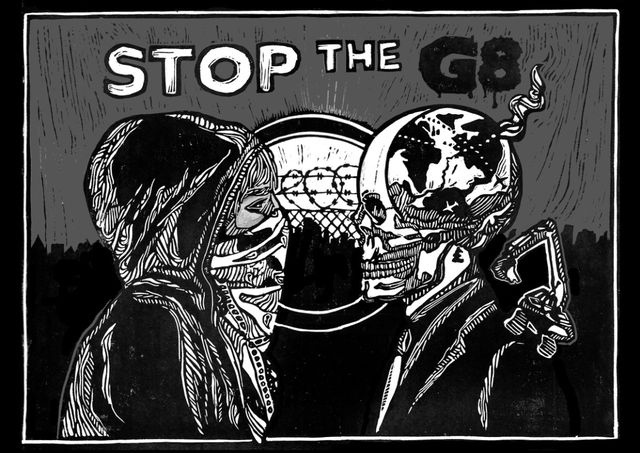 StopG8 is organising a week of action, including workshops, gigs and
cultural events in June. There is also a major day of action on Tuesday 11 June, 'J11 – Carnival against Capitalism'. There's lots to do and we need more people to get involved.

Hate meetings?! No problem, we want people to come and take on jobs, you don't have to sit around in big groups discussing things. The next
national meeting will be on 6th and 7th April at LARC, 62 Fieldgate
Street, Whitechapel, London, E1 1ES ( see here for details:

https://network23.org/stopg8/next-meeting/ ), we'll arrange the agenda so you can come along and get involved without spending hours in meetings.

To propose items for the agenda, request accommodation in London or for
more info please contact

StopG8 London local meetings will be 6:30 on the first and third Monday of
the month, at LARC (

We are also planning national meetings on the 27th and 28th April in
Nottingham and 25th and 26th May in London.

“There is one common struggle against those who have appropriated the
earth, the money, and the machines.” ― Voltairine de Cleyre

The UK is hosting the G8 conference in Fermanagh on 17-18th June in the
North of Ireland. The Stop G8 network has come together to oppose it and
to take action against capitalism.

The G8 is a meeting of the leaders of the eight 'most powerful' nations, held annually. It will be used to discuss strengthening international capitalism and as a photo opportunity to give the impression of benevolent leadership. Any real solutions to the problems we face can't involve institutions as undemocratic as the G8. The real problem is capitalism; in order to fight austerity, exploitation and the destruction of the planet we have to challenge the G8 leaders instead of lobbying them.

Stop G8 has already made an international callout for participation in a week of action from the 10th-14th June in London, leaving space for a mobilisation in Ireland at the summit venue if Irish activists call for it, and for autonomous anticapitalist actions to be taken in the run up to the G8 on May 1st. We are also planning a programme of cultural events to coincide with the week of action and convergence space in London.

We are holding a Carnival against Capitalism in the West End of London on J11, under the slogan "One Common Struggle". There are already mass actions planned on the 13th and 14th of June and we hope that affinity groups will come forward and propose more

We need your help to make all this happen!

SCARE tactics and propaganda are being deployed by the British state in the run-up to the G8 summit in June.

There is talk of special cells being readied for protesters at an army camp, of police-state style security measures and of overworked and stressed-out cops.

The pressure has also been increased by the discovery of a mortar bomb which a dissident republican group says was intended for the G8 summit venue.

The authorities are facing big protests in three locations - in London for a week of action including the J11 Carnival Against Capitalism, in Dublin just before the summit and around the actual venue at Lough Erne, County Fermanagh (pictured above).

"The police and prison services in Northern Ireland have begun arranging for hundreds of extra holding cells in anticipation of protests at this summer's G8 summit turning ugly," reports The Belfast Telegraph.

Work is apparently under way to make available extra cell capacity inside Maghaberry high security prison in Co Antrim, as well as at Magilligan prison in Co Londonderry and Hydebank Wood young offenders' centre and women's prison in Belfast.

The authorities claim a "ring of steel" will be in place around the summit venue at the Lough Erne resort. With the lakes of Fermanagh providing an additional natural barrier between the hotel and outside world, they say it is unlikely that protesters will get anywhere near the complex.

The demonstrators' focus may therefore shift to the town of Enniskillen, five miles away, or further afield in Northern Ireland, says the Belfast Telegraph. It adds: "Indeed London may witness the largest protests" - referring to the actions lined up by anti-capitalists Stop G8 on and around Tuesday June 11.

Police in Northern Ireland told the BBC: "People travelling on 16, 17 and 18 June 2013 will be advised to leave extra time for their journey.

"Previous G8 conferences have also attracted a number of protest groups. Police will be planning for this eventuality and this may again result in some disruption to the transport network.

"As a result there will be a highly visible police presence across parts of the Antrim Borough throughout the duration of the G8 conference."

The police said that there would be a large security presence on all routes around the airport.

There will also be a "larger than normal police and security presence" within Belfast International Airport itself in the days leading up to the arrival of the delegates.

The Impartial Reporter focuses on the pressure on police for what it is being billed as a bigger challenge than the "troubles".

It says: "With just 11 weeks to go until eight world leaders including US President Barack Obama visit Enniskillen, police officers on G8 duties in Fermanagh are complaining of being "over-worked" as they patrol the county around the clock.

"In what will likely be the biggest security operation in the history of Northern Ireland, a considerable number of police officers here have been tasked with ensuring nothing goes wrong in the run-up to the global event. But some of the officers, according to the chairman of the Police Federation of Northern Ireland, feel under pressure by the workload."

The bomb found abandoned in Fermanagh was claimed by republican group Oglaigh Na hEireann, which said it was to be detonated at the hotel hosting the G8 summit.

In a coded statement to The Guardian, the anti-ceasefire dissident organisation also admitted responsibility for an attempted mortar bomb attack on the heavily fortified New Barnsley police station in west Belfast two weeks ago.

the rest of us are busy surviving, and fighting the cuts. you know, in the real world.

who wrote that above article about SCARE tactics?

when i first saw the word SCARE in capitals i thought it was a cut and paste from the Sun newspaper etc. it very tabloid, maybe you could include a standard masked anarchist photo with the caption "Trouble...masked anarchist" the Sun love a caption with three dots hahaha...


but lets not worry, the police dont actually consider this a great threat, they simply will use it as a great training opportunity, and another attempt to run down the total activist movement.

lets do a pan european call out, in several languages, and really get london buzzing, and lets organise a demo that is in the ghetto, and gets the kids out on the street who actually know how to fight the cops.

What ghetto? You want to go anywhere in London and tell people that you consider the place they live is a ghetto and see how long you last. You reckon you can organise anything that would attract "the kids out on the street who actually know how to fight the cops" you're having a laugh. As well as being really patronising and insulting. No wonder nobody is interested in what you and the G8 crowd are on about. If you want to get involved with "the kids out on the street" you have a lot to learn mate.