London Rising Tide blockaded and shut down the Old Street Shell garage last night in memory of oil activist and sambaista Val Dazzle who lost her battle with Motor Neurone Disease in early 2010.
They were joined by Rhythms of Resistance samba band, with whom Val played for many years, even in a wheelchair just a few months before she passed away. 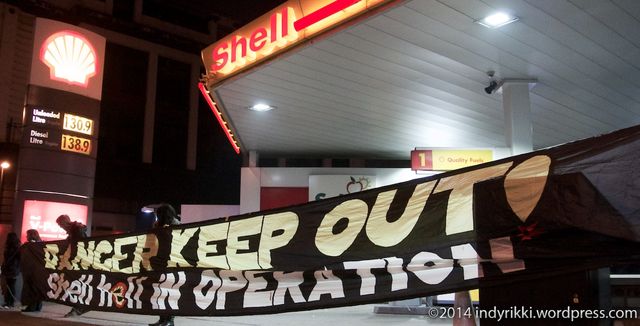 The Old Street Shell garage has been closed many times by activists over the years, and there have been several previous memorial blockades in memory of Val.

As well as a huge 'Shell Hell' banner, this time there was a new very special banner that said "Val Dazzle shines on and on".The entrances to the garage were closed down at around 7.45pm, and a string of motorists were advised to try elsewhere.

As well as the samba rhythms, there were dancers, and a giant bubble performer.

Activists handed out loads of leaflets to motorists and passers-by - these drew attention to the Canadian Tar Sands project, the Rossport pipeline and refinery in County Mayo where Val had strong connections, the Niger Delta in Nigeria, and of course the issue of climate change.

After nearly half an hour, a lone constable turned up in a police van. He warned protestors that as they were 'obstructing the highway' they may be liable to arrest, and he pointed to the CCTV cameras, saying the protest was being monitored. He was actually fairly laid-back about the whole thing, and also sent the driver of a huge 4x4 Range Rover on his way after he'd tried to nudge his way in (actually slowly driving at dancing activists) and had threatened a photographer.

With a warning that more police would potentially arrive to move and possibly arrest people if they continued to block entrances, the officer got back in his van and drove away. His heart didn't seem in it.

For another 20 minutes, protestors allowed the occasional vehicle in, but turned most away with persuasion and some obstruction-lite, until the pub beckoned after successfully disrupting Shell's business for more than an hour.

Val would have soundly approved of the event, and to those who knew and loved her, it was a special evening of tactical frivolity. No doubt they'll be back in 2015.