On 1st of August 2014, activists from the Solidarity Collective hold a demonstration outside Tesco's store on Kensington High Street London. The protest was calling on Tesco's to stop selling Israel goods. 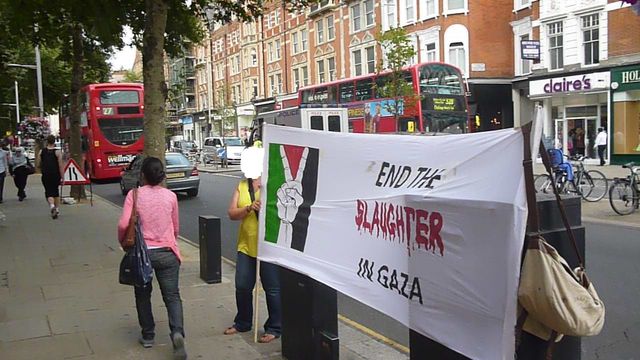 “Take your leaflet back sir, I won’t be shopping in Tesco’s today’’

I was aware companies like Tesco’s were selling products from Israel. However last Sunday I was shocked to find products on sale from an Israeli Settlement in the West Bank of Palestine. There was no shame attached to openly displaying this fact.
Like most people I have been in a constant state of anger and despair with the ongoing war crimes and slaughter happening in Gaza. It gets to the stage where you ask yourself ‘What can I do?’
It is amazing to see the thousands of people turning out for these demonstrations. It is certainly heartening to see that people still care. But I fell, as I have always done, that marching from A to B is not enough. We must take direct action.
On previous articles on indymedia related to this protest there have been comments about the religion of the owners of Tesco. I can put my hand on my heart and state that it wasn’t until yesterday that someone explained to me that the owners of Tesco are Jewish.
Personally I don’t care what religion they identify with, in my eyes and I am sure their own, they are only the 1%.

The war crimes of Israel have been on full display for all to see. There is no hiding from it. Even the BBC is under pressure with their universal ongoing justification of mass murder.
It is therefore no surprise that the non issue of Anti-Semitism has arisen. This playing on emotions has but one goal -to shut down any criticism of Israel and there ongoing war crimes and breaches of international law. Therefore one must ask, “who benefits from this tactic?” In answering that I feel we can all be assured that the state has hand to play in this particular piece of propaganda.
Despite only two of our collective being available last night, we had an amazing demo, we give out 200 leaflets, turned away four customers from the shop and had scores of positive supportive interactions. Many were unaware of the sale of these goods in Tesco.
We had countess messages of support. Horns beeping from passing cars and many people stopping to take photos of the banner.

We managed this demonstration despite an attempt by the MET TSG to intimidate us as soon as we arrived. Mind you, they will say they were just trying to facilitate our right to protest. (video

We hope people can take inspiration from this and do their own protests, it didn’t take a lot. Access to a printer, some kind of banner and a willingness not to be intimidated.
On a last note, on every demonstration we have taken our banner, we have had comments made that it’s such a great banner. We really wish that it’s one banner we could put away and never have to use again.

As ever, our thoughts are with the Palestinian people and their struggle for freedom.