Report of a protest in Kirkcaldy, Fife, Scotland against the continuing carnage in Gaza, one of many demonstrations taking part across the country and indeed across the world. 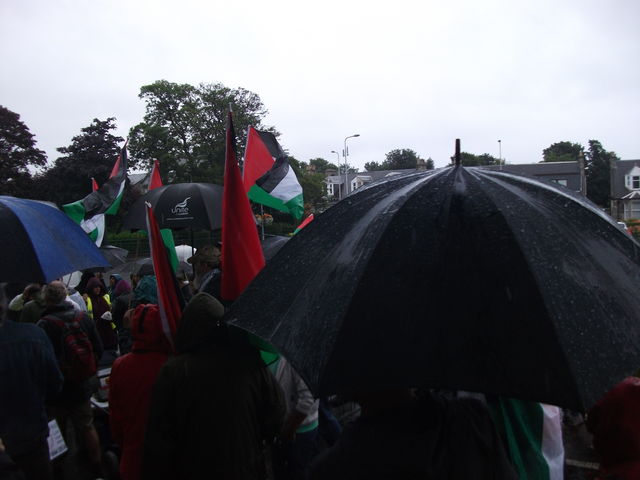 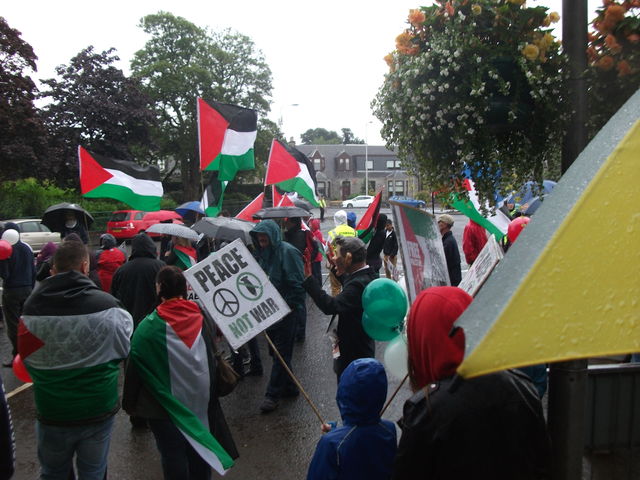 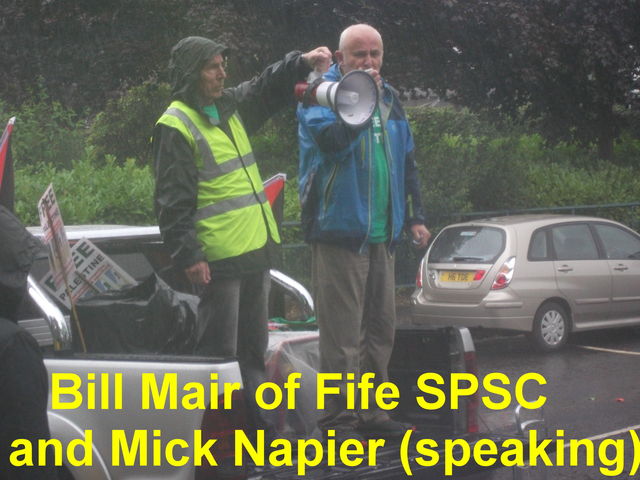 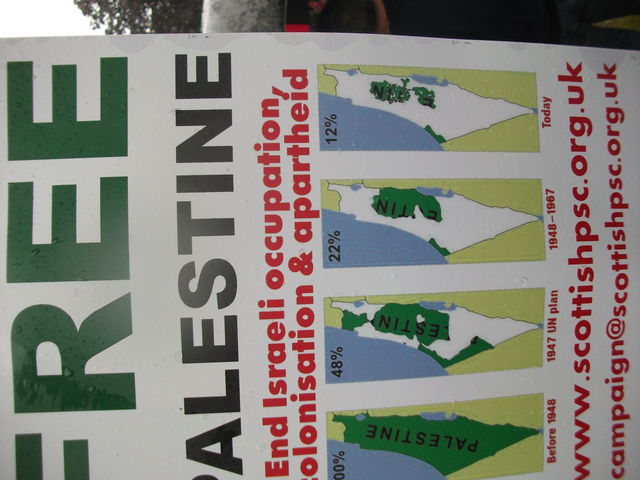 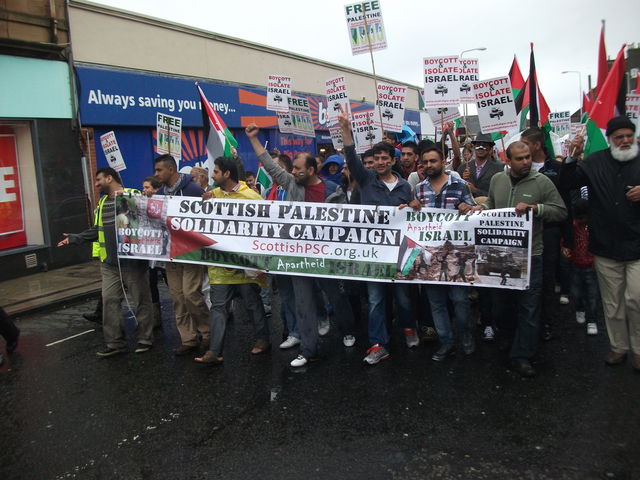 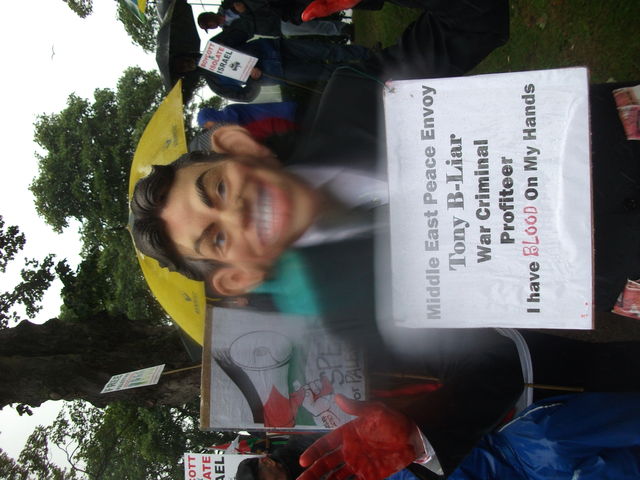 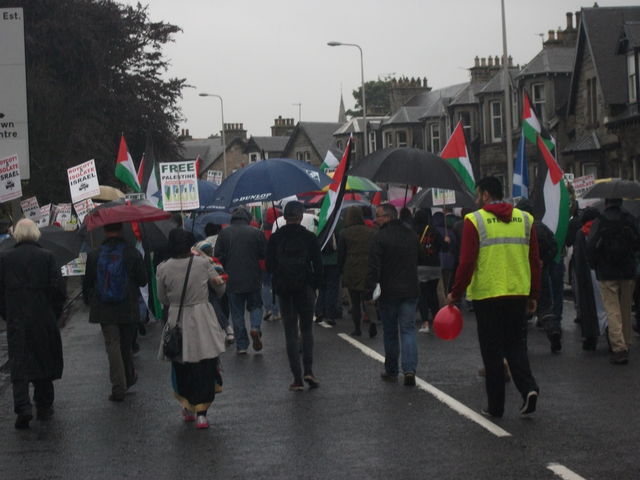 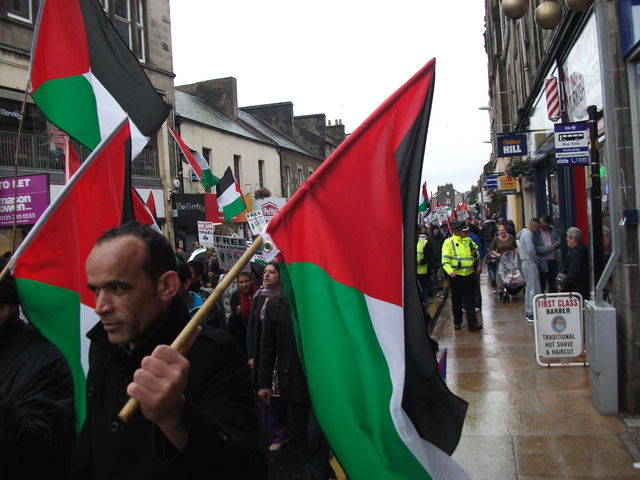 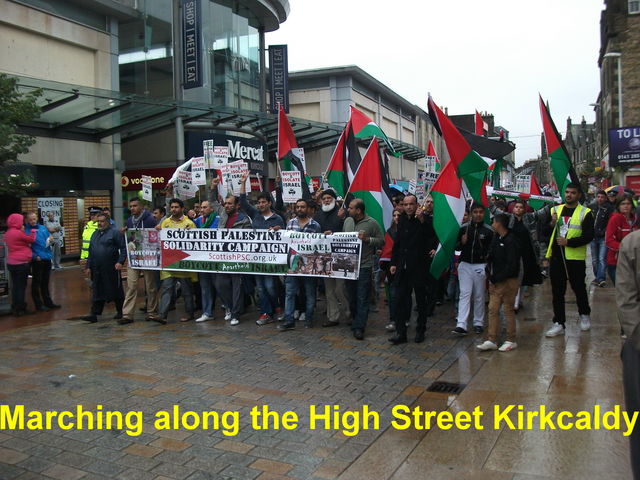 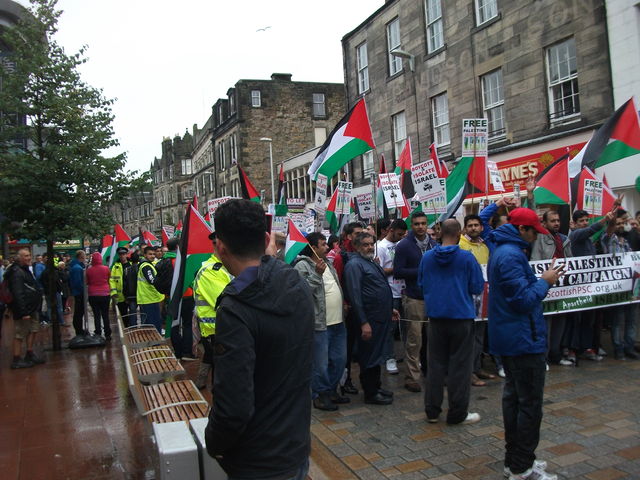 As the slaughter in Gaza continues there was a march and rally in Kirkcaldy, Fife on Saturday 2nd August. In driving rain the gathering listened to speakers including Cara Hilton Labour MSP (Member of Scottish Parliament) for Dunfermline and Mick Napier the constituency coordinator of Scottish Palestine Solidarity Campaign. The event was chaired by Bill Mair of Fife SPSC.

Cara spoke of the half a million people displaced by the violence and how Gaza’s population of 1.8 million was being collectively punished. To loud cheers she called for a boycott of Israel.

The gathering marched off along the High Street Kirkcaldy and along Kirk Wynd with loud chanting of `Free, Free Palestine` , `Viva, Viva Palestina` , and `Boycott Israel`. Passing Fife College the rally assembled at the square by the Town House around 1.30 and listened to a number of speakers.

Susan Karim who organised a march for Iraqi orphans in 2003 reminded everyone that Gaza is surrounded by air, sea and land and is like a concentration camp. Israel is the only country in the area that has nuclear weapons. If any other country did what Israel is doing they would be bombed like Iraq. She said passionately that we must stop the genocide.
Then Roderick Campbell Scottish National Party MSP for North East Fife spoke saying that the Israeli attack was totally disproportionate and called for a UN enquiry and an end to the blockade of Gaza.

Next was Alex Rowley Labour Member of the Scottish Parliament for Cowdenbeath. He thanked everyone for turning up in the bad weather and voiced of the need to build up a movement and for an end to the siege of Gaza.

Then Peter Lockhart who is Labour Party Councillor for the ward of Cowdenbeath called for Fife Council to boycott all Israeli goods. He emphasised that he was not anti-Jewish but was against Israel’s policies.

Dr Sarah Glynn of the University of Western Scotland in Paisley said on behalf of Scottish Jews for a Just Peace that criticism of Israel and of Zionism is not anti-Semitic. She told of the turning away of Jewish refugees by the US and Britain during the Second World War. She went on to say that Israel’s actions endanger Jews around the world. She opined that the concept of an ethnic Jewish state is a cancer at the heart of Israel. She also said that Israel should give the right of return to Palestinians.
She finished her speech by saying `Free, Free Palestine! `.

A short message from former MSP Tommy Sheridan was read saying `Stop the slaughter, stop the grotesque inhumanity, in the name of humanity the world must boycott Israel. `

The last speaker was Dr Bashir Oudeh who is a medical doctor and he pointed out that if the carnage in Gaza was translated in to American terms it would be like 300,000 Americans being killed and 1.5 million being injured.

The event finished a little after 2pm. The whole afternoon passed peacefully and interestingly there were a number of police officers present whose job description is `Police Liaison Officer` the acronym for which is PLO.

As well as Kirkcaldy there were parallel events in Aberdeen and Glasgow though disappointingly none of these were reported on the BBC Scotland website. This is unusual as the BBC website almost always has a report of a few hundred words and a photo of any anti-war protest. The Glasgow event was said to have attracted about 3,000 people yet was invisible as far as the Beeb is concerned. At the time of writing on Sunday lunchtime (3rd August) the BBC main news website has a photo of the Israeli soldier who was thought to have been kidnapped but is now presumed dead. That picture has been there since Friday. There is a report of yet another Israeli attack on a UN school in Gaza but remarkably this is given less prominence.

The local Courier newspaper did have a report of the demonstration:

There will be many vigils and demonstrations for Gaza in the coming days including a national demonstration in London on Saturday August 9th.