Occupy Democracy – The Battle of the Tarpaulin

If a progressive movement can gauge the effect it’s having from the response of the State, then the Unions should be ashamed of themselves, and the Occupy movement should be cheering loudly. 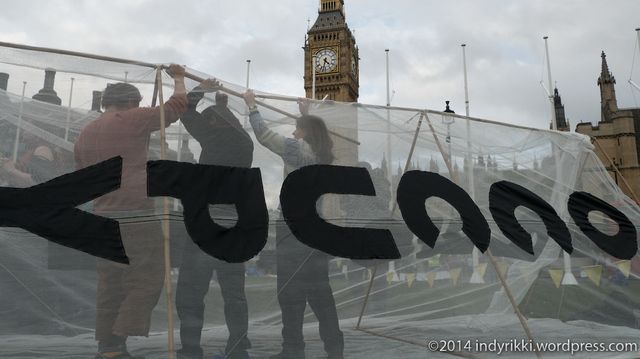 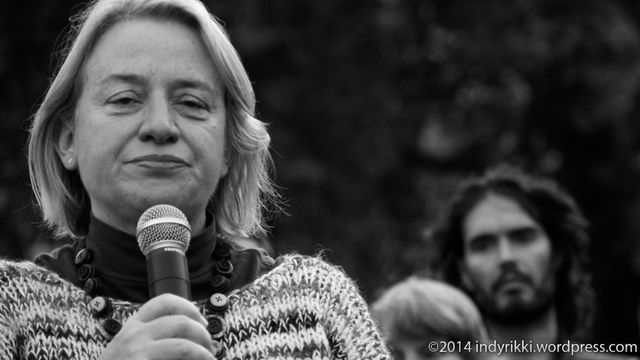 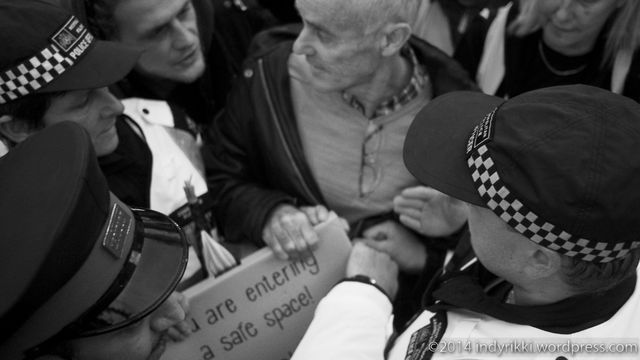 Depending on whom you believe, the Unions roused between 50,000 and 100,000 people to march a tiring long course to Hyde Park to listen to the same old speeches from the same list of actors, demanding change but seldom challenging the system.

Meanwhile, globally there is a movement growing that recognises the present system of central banking and corporate power is so out of all public and democratic control, so corrupt, and so destructive that it can’t be ‘changed’ but must be replaced.

Although in the UK the movement appears to be small in numbers, it’s clear it has a growing resonance, and that more and more people are searching for a new paradigm. What is also clearer than ever after yesterday, is that those who hold power are deeply afraid of this movement.

After the TUC march, Parliament Square was very busy, with no more than a couple of hundred ‘occupiers’ surrounded on all sides by as many or more police.

As well as TSGs on all the pavements around Parliament, there were several groups standing in military formation round the square, and of course several Police Liaison in the blue tabards, chatting jovially with the crowd before reporting back to a senior officer from the National Domestic Extremist Unit.

Meanwhile the “domestic extremists” had erected twin towers of silk and bamboo, painted with the words “Occupy” and “Democracy”, an easel displaying a “Safer Spaces” policy, and a tiny sound system for speakers to use. And those extreme speakers included George Barda, very well-informed and reasonable Occupy activist, Natalie Benn, leader of the Green Party, and professor and author, David Graeber.

The ridiculously named “Heritage Wardens”, who patrol Parliament and Trafalgar Squares, were busy pointing out infringements of the Bye-Laws (

https://www.london.gov.uk/sites/default/files/Trafalgar%20Square%20Byelaws%2025Jan2012_1.pdf). These rules were passed in 2012, shortly after the Occupy Camp was evicted from St Paul’s, and they are based on clauses in the Police Reform and Social Responsibility Act (PRASRA), which were brought in as a replacement for the unenforceable SOCPA legislation designed (but failing) to remove Brian Haw from his decade-long occupation and peace vigil. The new laws read like a history of Haw’s successful legal challenges of previous attempts to dislodge him, and they prevent all manner of public behaviour that might be associated with protest and especially occupation, also giving the immediate power of seizure without having to bother with legal impediments such as courts and judges.

A sleazy reporter from the Daily Mail, who seemed to have close ties with the authorities, told me that the Superintendent (“a lovely chap”) wasn’t going to mess around, and would make it “short and sweet”, and sure enough, the disruption and harassment began.

First, a couple of units of TSG moved in and surrounded the blue tarpaulin that was being used to keep extremist bums dry on the grass. But despite the intimidation and police numbers, people linked arms and chanted (

Next, the Super sent in a highly-trained ‘bunting snatch squad’ comprised of Heritage Wardens and police. Another snatch squad unceremoniously pulled down the delicate towers and hauled them away. A small ‘safer spaces’ display board was wrestled away from an occupier, with thuggish police committing several assaults as they withdrew with their booty, and finally the small sound system was removed, again with brute force against peaceful but enraged members of the public.

As darkness fell, a massive police cordon formed near the edges of the grass, and anyone arriving was informed that the park had been closed at 7pm, and that people were not allowed in under Section 1 of PRASRA, which was of course nonsense, as it was actually under bye-laws, and by then they’d run out of copies of the bye-laws (which they are required to show when enforcing).

“You can’t stop an idea” is a familiar truism of the Occupy and Anonymous movements, and last night was an astonishing and beautiful example, as occupiers carried on their talks, music and assembly despite interruptions, and later in the night, their solicitors caused the police to back down and allow people to enter the square until the GLA could show that their sudden “closure” was in any way lawful.

Some brave folk stayed again through their second night in the square, with little opportunity to sleep, any attempt to pitch a tent triggering immediate attack and seizure.

Despite all this petty repression, the Occupy Democracy timetable of events is planned to continue, with fabulous speakers and events connecting many ideas, movements and people throughout the next week, in the safe knowledge that they are ruffling the feathers of the corrupt and powerful. If a couple of hundred activists can cause so much panic, imagine what two thousand, or two million could achieve.

As for the tarpaulin – it was still in place this morning.