Lambeth Council's Cabinet agreed to press ahead with the complete regeneration of Cressingham Gardens during a robust meeting on Monday evening at Lilian Bayliss Technology School which had to be suspended temporarily after councillors were shouted down in a blistering cacophony of heckling, open derision and finally, a barrage of chanting (of the word "shame on you" and "what a load of rubbish" by a sizeable turnout of objectors in attendance, as councillors were responding to the conclusion of many detailed contributions from local people objecting to council plans. 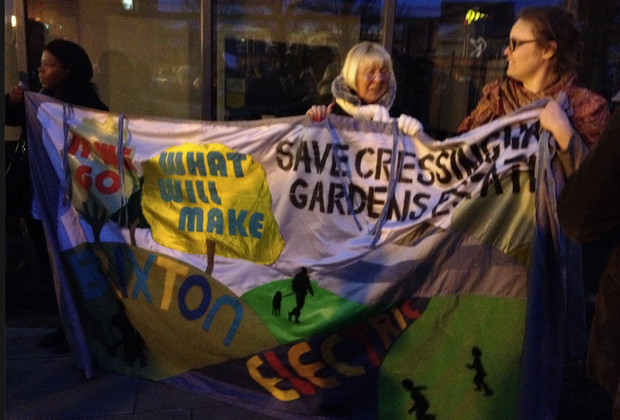 This now means that the Labour Cabinet has agreed for the second time to go against the wishes of the majority of residents with the regeneration model, rather than repair.

The High Court ruling of “unlawful” behaviour by Lambeth Council that led to the second consultation, could now also be an option once again for the residents. Speakers during the meeting continually called for a full public inquiry to look at the financial claims made by Officers in the Cabinet report.

Council Leader Cllr Lib Peck opened the meeting on Monday evening with a request for it to be carried out in a reasonable manner. A large crowd of protestors had gathered outside Lilian Bayliss. The following hour and 45 minutes was always going to be lively.

“We do not believe that the quality of homes should be determined by wealth or income.”

This statement led to the first of many comedy boos that continued for the rest of the evening.

“If we do want an opportunity to listen to other people, then we will have to listen. Otherwise I will adjourn this meeting. I recognise that Cressingham generates strong emotions.”

Cllr Bennett then attempted to make his case for complete regeneration of the council estate:

“The Lambeth Housing Standard has been co-produced with thousands of tenants. This is not a bare legal minimum, but an aspiration as to where people want to live.

In 2012 the Council was upfront about the cuts in the Lambeth grant.”

The Cabinet member composed himself, then added:

“In 2012 we stated that we were £56m short if we wanted to bring the LHS to every home in Lambeth. Refurbishment was not going to be an option. Since then the finances have deteriorated. We are facing a further £30m coming out of the housing account because of the Housing Bill rent reductions. The cost of refurbishing Cressingham is higher than refurbishing other estates.”

It was clear that Cllr Bennett wasn’t looking to win any votes in the room when he added:

“The case has not been made to divert money from other estates to Cressingham. The options of refurbishment do not stack up favourably. The proposal is for all homes to be re-built. It will see no loss of social housing.

Cllr Bennett was then shouted down. He couldn’t continue.

He was backed up Cllr Peck:
“Matthew is just trying to explain the decision.”

This was a loaded statement in itself, suggesting that the regeneration of Cressingham Gardens was already a done deal.

The Officers were then invited to explain their recommendations. Neil Vokes, the Programme Director of Housing explained:

It was this statement that produced the loudest laugh of the evening so far.

peakers were then invited to offer their observations on the Cabinet report. The Cressingham tenants rep argued:

“Tenants are set to lose their secure tenancy under the Special Purpose Vehicle (SPV). It would appear that Lambeth wants to charge higher rents on one and two bedroom properties. These are used by the elderly.”

It was then revealed that the residents had found out late in the day that Lambeth Council has now approached Savils to manage Homes for Lambeth, the SPV that allows the Co-operative Council to act as a property developer.

“This has now become a stock transfer. All tenants should be balloted on whether this can be allowed to take place.”

The next speaker to address Cabinet represented the freeholder’s association:

“There was never any mention of the freeholders during the consultation meetings. We asked questions, but the Council never bothered to reply. Freeholders have been kept in the dark. Do you remember that we exist?

We sense that we will not be offered the proper value for our properties. We don’t want so called ‘affordable’ homes. Lambeth is shifting the goalposts. We don’t intend to be short changed.”

Resident Gerlinde Gniewosz then delivered a passionate speech to Cabinet, demonstrating the level of technical detail that she has developed whilst fighting to save her home:

“Cllr Peck: you assume that all of your Cllr’s have a level of knowledge. They have come to our workshops with no knowledge. We have had to teach them. We request a full inquiry into the Lambeth financial model. This is a clear attempt to mislead both Cabinet and residents. It is shocking.

We also request a serious consideration of the Cressingham People’s Plan. This has been misrepresented in the Cabinet report. How can you consider such a detailed report in only five days? The finances have been excluded from your own Cabinet report. Why is this? Are your Officers scared?

Where is the analysis showing that the Housing Revenue Account (HRA) can support regeneration? The People’s Plan has been financed. We have already started a conversation with banks. There is no evidence that your SPV is funded.

Who is accountable here? There are blatant lies in your report. Who can get a mortgage for an extra £300,000? This is Lambeth, not Pimlico.”

Council Officers were then asked by Cllr Peck to respond to some of these points. Neil Vokes confirmed that Savils has now signed up to manage Homes for Lambeth:

“No residents were involved the procurement of this deal as it was too technical.”

This statement almost led to the meeting being abandoned…

Vokes claimed that similar financial assumptions had been made whilst analysing the People’s Plan, as those used to consider the five Council options for Cressingham Gardens.

The People’s Plan was also then addressed by resident Tom Keene:

“The Council’s response to the People’s Plan is inaccurate. 250 pages were excluded from the Cabinet report. This includes the High Court judgement – which seems like quite an important document to me…

The main issues at Cressingham are not structural, but one of repair. Not making the repairs makes Lambeth seem deceitful and underhand. It makes option 5 seem more appealing than it actually is.

We have been told that there is no money. Why then has £25m now been found for Homes for Lambeth? Will this ever be paid back? Under what terms? When was it known that this money would be available? Why has it been reported as income, when it is clearly a loan? £25m loaned to a private company is not consultation – it is a dictatorship.”

Resident Andy Plant then put forward a very well argued case about the provision for disabled and elderly people on a regenerated Cressingham Gardens:

“We have requested data and we have had no response. There is a fantastic chain of lost correspondence.”

It was at this point in the evening that local Labour MP Chuka Umunna decided to send out a not very helpful tweet, choosing partisan politics over supporting his constituents.

It was left to Tory Group Leader Cllr Tim Briggs to emerge as an unlikely defender of the Save Cressingham campaign:

“It wasn’t in your manifesto to demolish homes so that you could build more. The reports states that tenants will be able to remain on the estate ‘as far as possible’ – what does this even mean? It is just words.”

Cllr Briggs also questioned the legality of transferring tenants over to an assured agreement. He also pointed out that repairs haven’t been completed on the estate for many years, leading to the Labour Council then turning round and saying that the homes are in such a state of disrepair that they need to be bulldozed:

“Who has been in charge of repairs? You are using your own poor state of repairs to justify regeneration. This Labour Council is the worst social landlord in all of London.”

Cllr Peck couldn’t resist a pop back about Tory housing policy – and with good reason as well.

Other Cabinet members were then invited to add any closing remarks. There is an unwritten rule in the Lambeth Labour Cabinet that you bail out a Comrade when they are taking a public kicking.

It was telling that only two other Cabinet members stepped forward to back Cllr Bennett.

Cllr Paul McGlone was then responsible for bringing the Cabinet meeting to an anarchic end. The Cabinet Member for Finance sat patiently throughout the previous one hour and 45 minutes, but it was clear that he had plenty of aggression to release:

“We are making difficult financial decisions about your future. We have to legally take in affordability. The regeneration model is the only affordable model”

The agenda item ended in complete confusion. No one was really sure if Cabinet had actually agreed the report or not. This was always going to be a minor point; Cabinet recommendations are agreed behind closed doors in pre-meetings anyway. The Nu Labour lot hold any disagreements in private, and then play out the panto of Cabinet in the public domain.

Shouts of: SHAME ON YOU echoed around Lilian Bayliss Technology School as the meeting ended in farce. The remainder of the agenda couldn’t be heard under the noise. Cllr Peck simply asked for her Progress pals to agree each item in order.

Read more and join in with the in-depth discussion on the urban75 forums (over 1k posts).

Help the Save Cressingham Gardens campaign!