If you think the EDL are the stupidest idiots on the planet, spare a thought for their braindead moronic French counterparts who shared a recent EDL Leeds Division video, thinking it showed 7000 nazis marching in Newcastle from the previous weekend. Talk about thick - 500 plus people "liked" the video which was actually filmed four years ago, believing it to be current. Not that there was ever 7000 people on an EDL march, but the cretins from across the channel put our EDL to shame in their sheer stupidity. 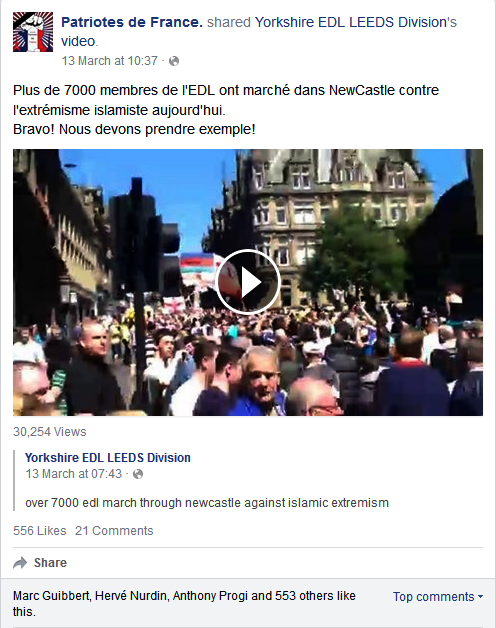 There were leaves on the trees, drunken fascist pissheads in short sleeve shirts and shorts showing off their shite tattoos, and yet, the French far right believed the march in Newcastle happened to exploit the Paris terrorist attacks.

7000 EDLers marching in Newcastle in March 2016!!!!! LOL Even though the EDL are well and truly finished.

How absolutely dumbass can moronic fascists get???

Marine Le Pen has a lot to answer for!

Small wonder so many French idiots vote for her.