Deputy leader of Pegida, UKIP member Anne Marie Waters (@amdwaters) has been caught out retweeting a white supremacist called Anthony Selby's lunatic anti-Semitic NWO conspiracy theory against George Soros. Selby is a good friend of former KKK leader David Duke, and is involved with the neo-nazi website Stormfront. The conspiracy Waters gladly retweeted, accused British judges of being "politically motivated" and encouraging an invasion of "third world parasites". For somebody claiming to be moderate, Waters retweet catches her out as an extremist, believing in neo-nazi conspiracy theories about a so-called New World Order. Alarm bells should be ringing in UKIP headquarters, however the political party still refuse to proscribe Ms Waters, despite her setting up the extremist Sharia Watch website, and joining the far right Pegida organisation. Nigel Farage will have to sit up and take notice now one of his high-profile party members is championing white supremacist conspiracy theories. 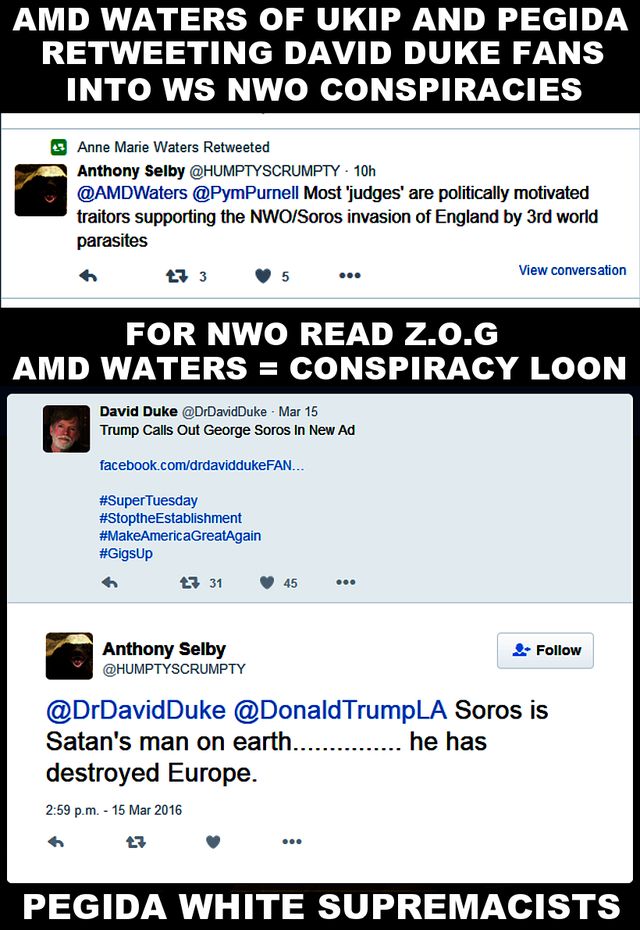 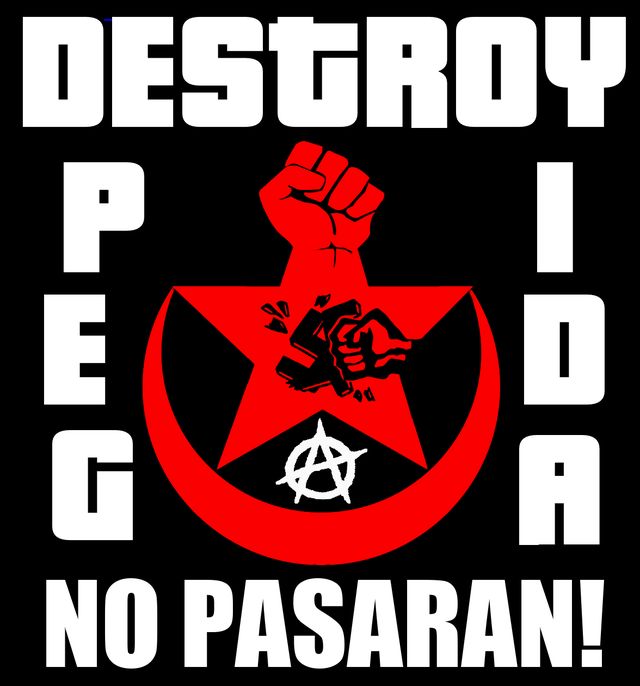 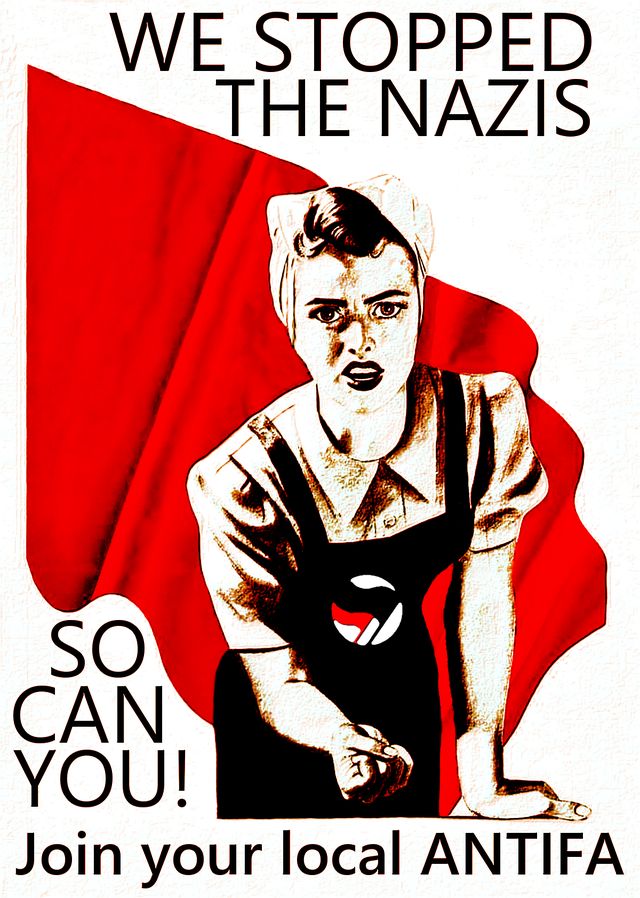 Anybody who studies the far right will know the divide between Islamophobic "patriot nationalists" and all-out neo-nazis is paper thin. Pegida In Dresden was set up as a neo-Nazi front organisation by a Hitler fetishist who dresses up as Hitler in his spare time. Over the past few months, Pegida UK has been going nowhere fast, it's "silent marches" where marchers sellotaped their mouths to prevent racist expletives from leaking out, achieved nothing other than keeping an industrial car park semi-populated at weekends. It is hardly surprising their German counterparts reminded Yaxley-Lennon and Waters that hardcore nazis stand shoulder-to-shoulder with bog-standard Islamophobes back home, members of the Hitler-licking NPD regularly filmed goosestepping through the cobbled streets of Dresden.

The British far right has become universally fragmented, with over twenty separate groups currently active including besides Pegida, the EDL, Britain First and the NF, an assortment of so-called Infidel groups and other splinters, whose politics range from the EDL rightwards, towards full-on national socialism. Since the dissolution of the BNP and the break-up of the EDL, many a tin-pot fuhrer has postulated everyone coming back together to "unite the right" however this is yet to happen. In Rochdale, this weekend, National Action stood beside members of the National Front and the NWI, however it is obvious to the likes of Waters and Lennon that unless Pegida start becoming more hardline nazi, and start warming to ZOG conspiracy theories, they will never become the illusive rightwing "broad church" that so many rightwingers long for.

The renaissance of the "glory days" of the EDL and the BNP, where straight-arm saluters are welcomed in equal measure with pro-Israel new school racists, will only remain a pipe dream so long as Pamela Geller and hardline anti-Semites continue to go their own separate ways.

AMD Waters's championing of the anti-Semitic conspiracy theories of Soros teaming up with high court judges to "flood" the UK with non-whites, David Icke style, is the first indication that Pegida might be willing to reconcile Hitlerites with pro-Israelites under one banner. No respectable politician of any colours, would dare tweet support of white supremacist conspiracy theories, without disappearing down the plughole of history. Oswald Mosley tried it, and ended up a broken, failed man, destroyed in the East End of London, Manchester and Liverpool. Waters, like Mosley, switched from left to far right. She started her career as a Labour councillor in Brighton, before her innate racism overcame her whole being, and she could not control it any longer, leaving to join UKIP, setting up the rabid anti-Muslim hate organisation Sharia Watch.

Saturday night's retweet about a cabal of judges under the control of a Jewish financier (Soros) to water down the Aryan make-up of Great Britain, is absolutely comparable to Hitler's belief that Jewish bankers were encouraging black people into Europe to destroy the white race. As such, this is strong evidence she is continuing her journey into the backwaters of political oblivion, although to successfully engineer a meaningful unity of the far right, she will need to speed things up a bit - start tweeting the fourteen words, celebrating Rudolf Hess's birthday, burning a cross in her backyard, and reading Mein Kampf as her book at bedtime, if she is to be taken seriously by the likes of the National Front. Hanging out with (serial grass) Eddie Stampton and his beer belly, won't be much use, and neither will sleeping with Diddyman, Duddy miniscule in all departments, her neo-nazi journey of self-discovery all set to be yet another flaccid forgettable fascist failure.