Once more, repeating the pattern of the entire Murdoch reign, the British people have been hoodwinked into supporting Conservative Party oppression by a deceitful and manipulative media hell-bent upon persuading turkeys to vote for Christmas. Brainwashed by racism and xenophobia drip-fed over decades by Britain's shameful rightwing press, gut-reaction racism has swung the #EU vote in favour of #Brexit, the moment when the ghost of deadly Thatcherism is reincarnated into a hybrid of a police state and a sweatshop / workhouse. Instead of immigrants doing the low-paid jobs, it will be the misled British worker crushed into the ground by global capitalism, using the UK as a source of cheap labour once all workers rights have been repealed "to make Britain competitive again". 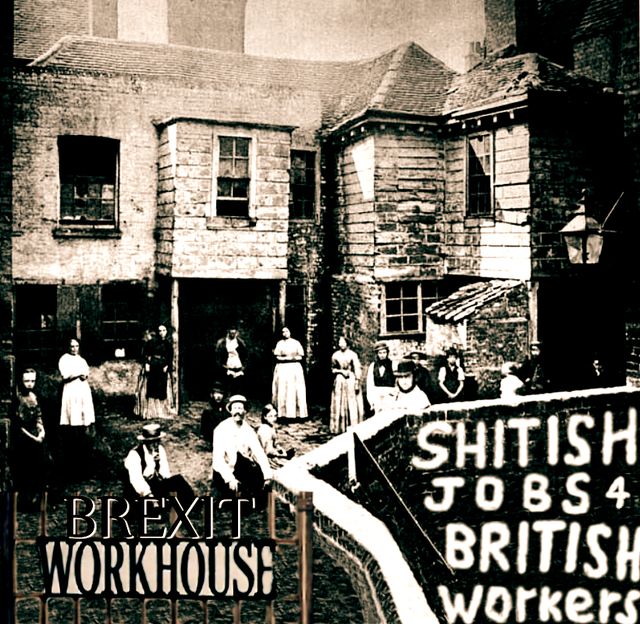 Boris Johnson will be the first to tell you that American companies are lining up to offer employment opportunities to British workers to make up for jobs lost as European employers move out of the UK to remain competitive. Last month, it was reported by Oxfam that some workers in the US poultry industry were forced to wear adult diapers as they were denied toilet breaks. Spending the whole day with ones crotch, groin and backside coated in diarrhoea is not just smelly and demeaning, turning workers into the human equivalents of battery hens, swamped with their own faeces. When faecal bacteria such as e-coli enter the bladder and vagina, this will result in extremely serious infections, sexual dysfunction, and even birth defects. Let alone the embarrassment of an unpleasant aroma following low-paid workers on the way home.

Anybody who thinks of protesting against the @brexit Thatcherite oppression, will find themselves unable to do do, as life under a real police state (not a fictional EU one) kicks in, not that left-wingers / humanitarians will have even a couple of seconds to listen to your cries of help, battling constantly against encouraged xenophobia, Islamophobia, anti-black racism, anti-Semitism, neo-Nazism, UKIP-style homophobia, and 24/7 hate. Puppies aren't just for Christmas, and UKIP are not solely a party of #Brexit. Even though leaving Europe is a victory of sorts for Herr Farage, himself, his party, and millionaire funder and porn baron Richard Desmond won't stop until there are race riots throughout the UK. Despite being from a Jewish background himself, Desmond does not think twice about using the Daily Express to encourage vulnerable young white people to become full-blown, National Action-style neo-Nazis, like those campaigning on the streets of Leeds for Vote Leave.