61 years ago on 6th August 1945 the first nuclear bomb, "Little Boy", a uranium bomb, was dropped on a civilian target, the city of Hiroshima in Japan, 3 days later on 9th August "Fat Man", a plutonium bomb, was dropped on the city of Nagasaki. These Americian acts of genocide, which killed as many as 210,000 people, were unnecessary and were designed "to kick-start the Cold War rather than end the Second World War".

CND (Campaign for Nuclear Disarmament) in the UK have shown that 59% opposes the replacement of Trident, Britian's submarine-launched nuclear ICBM (intercontinental ballistic missiles) system. On Friday 5th August protestors handed in 53,000 signatures on a petition to 10 Downing Street calling on the government not to replace Trident or develop any new nuclear weapons system. On Tuesday 2nd August two peace activists were arrested after painting "Trident is Terrorism" outside Faslane naval base. In October Faslane 365 begins — a year-long continuous peaceful blockade at Britain’s Trident nuclear weapons submarine base.

Protests against nuclear weapons are expected to take place around the world, 80 protests have been organised across the USA: To mark the 61st anniversary of the U.S. atomic bombings of Hiroshima and Nagasaki, rallies, vigils, teach-ins, and nonviolent protests will be held in more than 60 cities in 24 states across the country to demand an end to nuclear weapons and wars. Antiwar, nuclear abolition and indigenous rights groups are focusing on facilities run by the Bechtel Corporation, one of the world's leading nuclear weapons contractors, war profiteers, and violators of indigenous rights. Activities will take place under the banner: From Hiroshima to Yucca Mountain to the Middle East: No Nukes! No Wars! End War Profiteering! Support Indigenous Rights!

Protests are also expected in Perth and across Europe.

Links: CND | Global Network Against Weapons and Nuclear Power in Space | Nuking Iran is not off the table | Calculating the risk of war in Iran | The Hiroshima Myth | Wikipedia: Atomic bombings of Hiroshima and Nagasaki

Read on for analysis on the danger that the USA might nuke Iran [ indymedia.org version with translations ]. 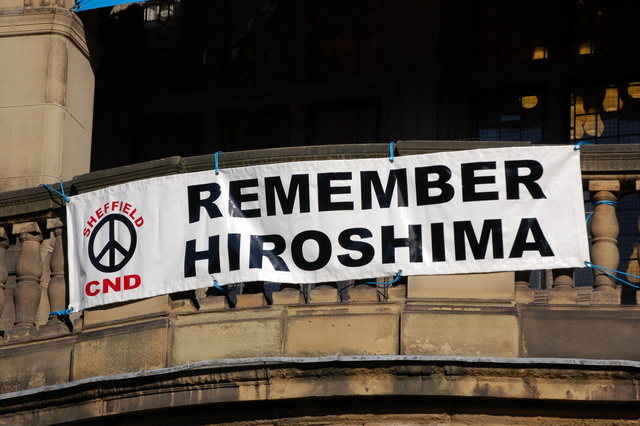 The threat of thermonuclear genocide is now worse than it has been for many years — Bush's war plan includes use of nuclear weapons, Michel Chossudovsky argues that the US plans to use nuclear weapons against Iran and according to Nafeez Mosaddeq Ahmed UK Government sources have confirmed that war with Iran is on. Plans to nuke Iran are totally insane however this might not prevent it happening because "our 'leaders'... are are psychopaths" and war criminals — John Kampfner has reported that At a Downing Street reception not long ago, a guest had the temerity to ask Tony Blair: "How do you sleep at night, knowing that you've been responsible for the deaths of 100,000 Iraqis?" The Prime Minister is said to have retorted: "I think you'll find it's closer to 50,000."

Ardeshir Mehrdad has pointed out that "The struggles of the Iranian people and the peoples of the Middle East against Imperialism and reactionary forces are a struggle that will directly influence the destiny of humanity on our planet. In this battle we will either witness the burial of the architects of the New World order of slavery, and their twin allies in the backward religious movements, or the world will succumb to violence and barbarism. There will be few places left in the world that can remain immune to events in the Middle East."

The Doomsday Clock is ticking away, it has read 7 minutes to midnight since 2002, it is now, perhaps, much closer to midnight...

- we do need to heed the lessons of the past.
nagasaki, perhaps unarguably demonstrates the lie to the "HISTORICAL" spin - as any research as to what "high-ups" in the U.S.A armed forces were saying then reveals.
the "gladwyn-jebb cttee, the orders to gubbins in 42 AGAINST eliminating the german fuhrer - see the p.r.o documents, also the dennis rigden book - amongst other things also add up to a serious need to "reinterrogate the past" - to avoid the same mistakes again.
It does seem, to say the least, that some people had a preference for war to peace.

The "bring back our coldwar slushfunds" campaign of the present is at a point of spinning out of control.

Creating "puppet" terrorists isnt new - even for war-profiteers - but the "infowar" side of it all - creating a "trend" for terror amongst the people that see themselves as "resisting" is a sting too far .

The reason why U.S.A / western european "terrorism" ( even economic sabotage using bombs could get discredited with ease) had died out by the nineties was that IT DOESNT WIN - it strengthens the things you are against . Look through the "signing off" communiques of faction after faction, fraction after fraction -

so - some of us are VERY sceptical that - at the point in time when some "needed" a reichstag fire (that DOESNT mean it was the cliched "inside job"- ie govts) - a lot of - seeming news management sussed - "events" happen. . . .

. . . . - sabotaging peace is easy - cheap even - but - even with a stolen mexican election, or trying to distract from the "hush-hush" clauses in the "doh. . . . ah" (see - a clue in the name - whoops apocalypse or what) round - the deregulating of ALL countries insurance, banking, etc etc etc etc - ie the master key to the entire economy of EVERY people - - - -

google "does it help to remember?" uk indymedia
also "2rememberthescams" "

the clock looking down over the needle, by the shrapnel damaged sphinx that has a plaque that commemorates the first bombs to fall over london . . . . has stuck for the last few weeks.

what time IS it