With hundreds of arrests, many still in prison, and bail conditions telling people to leave within near impossible speeds, there were some prisoner solidarity protests today. A demonstration outside Saughton prison in Edinburgh this afternoon was restriced by police using section-14. [Detailed timeline] [Unprecedented police harrassment against Wombles]

Section 14 was also in place in Edinburgh, to hinder a group of people at Waverly train station from protesting against the ongoing 'war on terror'. The police said they would only be allowed to hand out leaflets for half an hour. Some were stopped, filmed and searched [Report and Photos] In an earlier action, two climate ativists climbed onto the bridge that traverses Leith Street, connecting the St James Mall to the car park in Central Edinburgh, and hunged a banner that read "Coming soon, millions of ecological refugees, to a city near you"[Report | Photos]

In the eco-village in Stirling [Report], the situation is calm, but the police are still checking people going in and out. 3 arrests were made, apparently based on information from the Forward Intellegence Teams (FIT). The local police confirmed that (despite rumours) no private homes had their windows smashed and that the report of children being injured was false.

Anti-G8 actions have been taking place all over the world. [List of links] 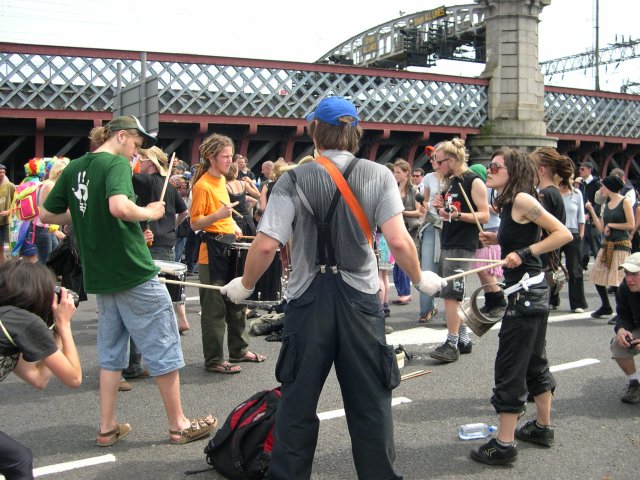