Activists from Rising Tide called for a day of action against the fossil fuel industry on April 1st. "They would have us believe that we can escape climate change with techno-fixes, market mechanisms and offset schemes - all technocratic acrobatics that distract us from the truth: the only real solution to climate change is to keep fossil fuels in the ground."

In Nottingham, over 30 people under the banner of Eastside Climate Action blockaded energy company E.ON's offices on Mount Street. People covered in green paint to represent E.ON's greenwash, locked onto the front entrance to the call centre offices and stood in front of other entrances preventing hundreds of workers from getting to work. Two people who were locked onto the front entrance were arrested and later in the afternoon the police entered and searched their homes in search for 'evidence' in relation to their arrest. Both were charged with public order offences and are to appear at Nottingham Magistrates Court on April 14th. 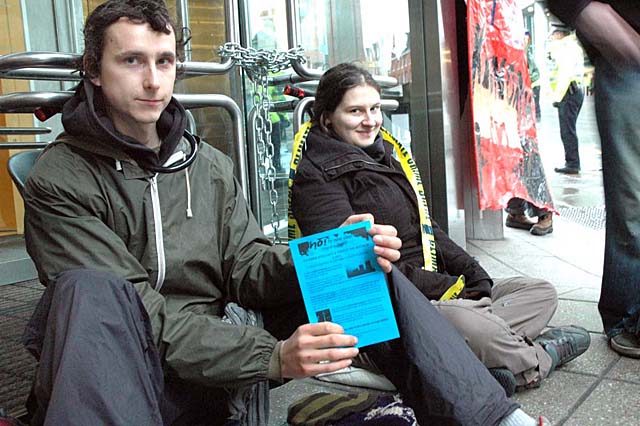 At 7:30, 30 people blockaded the entrances to E.ON's offices on Mount St, Nottingham City Centre. People covered in green paint to represent E.ON's greenwash, locked onto the front entrance to E.ON's office and stood in front of other entrances preventing E-on workers from getting to work. After negotiation it was agreed with police that people would unlock themselves at 10am and be allowed to leave. However, a few minutes before the deadline, the police arrested two people who were locked onto the front entrance.

At E.ON's offices, Bob Castle said "We are here today because despite E.ON publicly claiming green credentials, it is trying to build a new generation of coal fired power stations. It is trying to build the first new coal fired power station in the UK in 50 years, at Kingsnorth in Kent, and wishes to continue its expansion with a new power staion at High Marnham in Nottinghamshire. We are here to tell E.ON that they will not suceed and the only real solution to climate change is to keep fossil fuels in the ground. Coal is the dirtiest Fossil Fool and to build new coal power stations in the face of climate change is collective suicide."

While Eastside Climate Action were visiting E.ON in Nottingham, other groups around the UK were in Parliament Square (where People and Planet built a coal power station complete with 12ft cooling towers), Porsche HQ in London (where a public apology was issued on behalf of Porsche), the Department for Enterprise, Business and Regulatory Reform (where WDM held the world’s first laugh-in over plans for new coal at Kingsnorth) and Manchester City Centre (where a parade toured the city’s biggest fossil fools).

"We are taking action to prevent the fossil fuel industry from destroying our future," said Bob Castle from Eastside Climate Action. "Vested interests in business and government are bent on pursuing economic growth at all costs. We need to shrink, not protect, the fossil fuel economy if we are to survive climate change."