At 0700 Hours (PST) and 1100 Hours Atlantic time the Sea Shepherd Conservation Society vessel Farley Mowat was attacked by officers from two Canadian Coast Guard icebreakers the Des Groseilliers and the Sir Wifred Grenfell. Captain Alex Cornelissen informed the boarders that the Farley Mowat is a Dutch registered ship in international waters and that Canada had no legal right to restrict the free passage of the vessel through international waters. The ship was in the Gulf of St. Lawrence well beyond the Canadian twelve mile territorial limit. It has been reported that both the 1st officer and the captain of the ship have been arrested and will be brought before a court in Sydney, Canada. According to Federal Fisheries Minister Loyola Hearn, the "safety and security" of the sealers is the government's main focus and the seizing of the Sea Shepherd vessel will ensure a "safe and orderly" seal hunt. Last week, the same Mr. Hearn announced that Canada would lay charges against the captain and first officer of the anti-sealing vessel for coming too close to the seal hunt.

Captain Paul Watson was speaking by phone with Farley Mowat communications officer Shannon Mann when he heard the voices of men screaming for the crew to fall to the floor. The men carried guns according to Mann and could be heard by Captain Watson threatening the Farley Mowat’s crew. As Captain Watson was speaking with Shannon Mann, the Satellite phone went dead and nothing more has been heard from the Sea Shepherd crew. The Farley Mowat was documenting violations of the humane regulations and gathering proof that the seals were being killed in an inhumane manner. The Sea Shepherd Conservation Society is assuming that the video tapes will be seized by the Canadian authorities. There are 17 crewmembers onboard the Dutch registered Farley Mowat from the Netherlands, the United Kingdom, France, Sweden, South Africa, Canada and the United States. 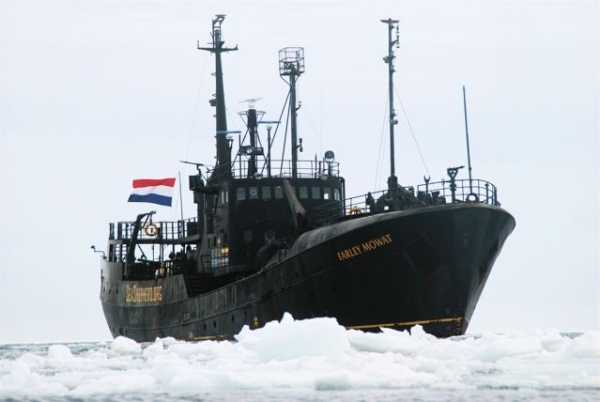 The Sea Shepherd Conservation Society has been cut off from communication with the crew and has no information on where the vessel will be taken. Sea Shepherd has no information on the condition of the crew and the Society is deeply concerned for their crew. "This is an act of war," said Captain Paul Watson. "The Canadian government has just sent an armed boarding party onto a Dutch registered yacht in international waters and has seized the ship. Considering that the mission of the Farley Mowat was to document evidence of cruelty by sealers to support a European initiative to ban seal products, I can predict that the Europeans will not be very pleased with this move and most likely this move by Loyola Hearn will guarantee that this bill is passed. In other words the Minister of Fisheries and Oceans has just handed us the victory that we were looking for."

The Sea Shepherd has been documenting the Canadian seal hunt off the coast of Newfoundland since the middle of March. On the 30th March, the Canadian Coast Guard rammed the Sea Shepherd ship twice, in an attempt to keep it away from the scene of the seal hunt. On 5th April, the ship (Farley Mowat) was attacked by a mob of 30-40 angry seal hunters. The attack took place while anchored in the French islands of St. Pierre and Miquelon. The Farley Mowat was berthed in St. Pierre to transfer video footage of the Canadian seal slaughter onto shore and await the resumption of the slaughter, which was temporarily suspended after the death of four sealers.