Last weekend saw the British National Party (BNP) return to the village of Denby, Derbyshire. For the third year in a row, the fascist party were holding their annual Red, White and Blue "festival" in the village, on land owned by party member and former Tory councillor Alan Warner. Anti-fascists protested outside the site. The BNP's recent successes in the European Elections appear to have strengthened the demonstrators' resolve with reports indicating that 1,000-1,500 anti-fascists mobilised against the event.

Last year the event was protested by several hundred activists in the nearby village of Codnor, while a smaller group of antifascists attempted to block access to the site. The campaign against the festival has continued throughout the year with Warner (1 and 2) and event organiser, David Shapcott, having been "visited" by anti-fascists. Warner appears to have decided that enough is enough and told the Derbyshire Evening Telegraph earlier this year that he was looking to move.

On the newswire: Angel-faced BNP racist aged 12 | Radio Derby's friendly chat with the BNP | Report from the protest against the BNP's RWB festival 2009 | First report back from RWB demo | BNP nazi guest barred from UK | Nazi farmer Warner gets another visit | Stop the BNP's 'Festival' of Hate | BNP confirm RWB will be held in Derbyshire for a third year | Fascist farmer targetted again | The BNP's 'RWB' Organizer Gets An Early Call 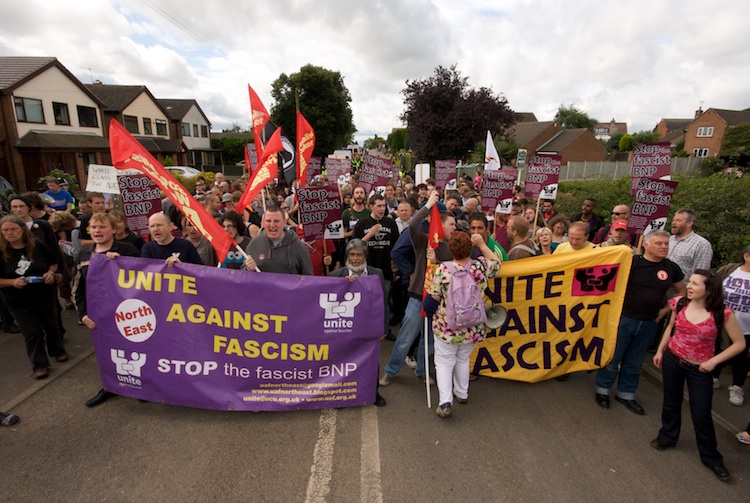 The BNP were protected by a massive police presence (<<a href="/en/regions/nottinghamshire/2009/08/436640.html">1 and 2) involving officers from five counties, including mounted police, a dog team, the Derbyshire police helicopter (which they share with Nottinghamshire) and an unmanned surveillance drone. The operation cost around £500,000 and Derbyshire Police have appealed to the Home Office to bear the cost. According to mainstream media reports, 19 people were arrested during the demonstrations (including a number for "acting unlawfully"). It is not clear these were all protesters as it has also been reported that three people were charged with racially aggravated public order offences

In the run-up to the festival, Preston Wiginton, an American white supremacist who had been invited to speak at the event, was banned from entering the UK.