This time last year, few people in the UK had even heard of the Alberta Tar Sands. Now they are moving rapidly up the public agenda, thanks largely to a growing grassroots campaign of resistance and international solidarity. The latest example of this has been the national “Fortnight of Shame” (April 1st- 15th 2010) to oppose BP's planned involvement in the tar sands, which came to a head on Saturday 10th with protests in London, Oxford, Brighton and Cambridge, including a Party at the Pumps in Sheperds Bush, and which culminated on Thursday 15th April with the BP + Tar Sands = Climate Crime protest outside the BP Shareholders AGM at the ExCel Conference Centre. 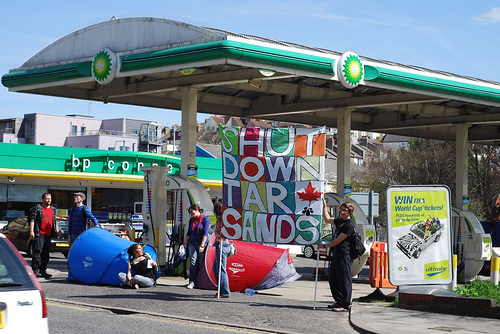 Tar sands extraction in Alberta, Canada is already the world’s largest industrial project, requiring the removal of vast areas of ancient forest and consuming enough natural gas per day to heat 3.2 million Canadian homes. Extracting usable fuel from the oily soil emits 3 to 5 times as much carbon dioxide as conventional oil drilling, the lakes of toxic waste it produces are so large they are visible from space, and the pollution from the project is poisoning the Indigenous people who live in its shadow. There is enough oil in the Alberta tar sands to push us over the climate tipping point even if we keep all other fossil fuels in the ground. Grassroots resistance has been taking place on the ground in Canada for years, led largely by Indigenous communities, but has attracted limited international attention – until now.

British companies including Shell and the Royal Bank of Scotland (see the “Cashing In On Tar Sands” report from Platform for more details) are heavily involved in exploiting the Canadian Tar Sands. BP was the only major oil company not to be in the tar sands, until in 2007 it purchased a stake in the 'Sunrise Project', an extraction project that could produce 200,000 barrels of tar sands oil per day. Then in 2008 the price of oil collapsed and Sunrise was put on hold – but signs are that BP is now planning to get it started again. Then, earlier this year, the company announced its potential involvement in two other, similar developments, although a final decision as to whether or not to go ahead with them has also yet to be made. While a longer, sustained campaign will be needed to get more entrenched companies such as Shell out of the tar sands, the fact that BP is not yet fully committed means that there's a real chance to prevent it from entering the tar sands at all – which could have a significant knock-on effect throughout the whole industry. As a result, an unprecedented coalition of UK climate activists, NGOs and Indigenous Canadian activists has come together to stop BP’s plans.

This new wave of UK action was kickstarted by the visit of five Indigenous Canadian activists to last August's Camp for Climate Action, who then led a noisy protest to the Canadian Embassy, the BP-sponsored National Portrait Gallery and BP's London HQ. On the same day, climate activists “corrected” the sign outside Shell's London offices]] to read “Hell Centre”, and occupied RBS's headquarters; each of these two actions included a strong anti-tar sands message.

The relationships forged at the Camp led to the founding of the UK Tar Sands Network – a project working in direct solidarity and partnership with First Nations activists in Canada and the Indigenous Environmental Network. This network has helped to foster a growing number of direct actions against BP and other tar sands collaborators.

In October 2009, activists from Thames Valley Climate Action invaded both BP's and Shell's recruitment events in Oxford's elite Randolph Hotel , taking over the podiums to deliver anti-tar sands messages. Three Indigenous activists spoke at meetings around the UK in November, culminating in a rally at RBS's London headquarters and a die-in organised by People & Planet. In the same month, Rising Tide Plymouth locked themselves on to a branch of Barclays Bank in protest at the company's investments in tar sands (as well as coal and the arms trade), and student campaigners from People & Planet held protests across Scotland, targeting RBS. The art-activist project “C-Words”, organised by Platform and others at Bristol's Arnolfini Centre, included a strong anti-tar sands element. In December, the Trafalgar Square Climate Camp held a tar sands protest at Canada House; the following day, three activists from Thames Valley Climate Action occupied the roof of the Canadian High Commission in London and dipped the Canadian national flag in oil. Meanwhile, many UK activists were involved in a large international anti-tar-sands solidarity protest in Copenhagen.

In February 2010, the UK Tar Sands Network and London Rising Tide held an alternative “Oil-ympics” in Trafalgar Square, to coincide with the opening of the Winter Olympics in Canada, which are sponsored by many companies involved in tar sands extraction. In March, Leeds campaigners held a public “tar sands wedding” between BP and Canada, Oxford activists invaded another Shell recruitment event, and a Canadian government delegation was given a suitable welcome in London.

Also in February, anarchists attacked the RBS offices in Bristol with rocks and paint-bombs, citing the Canadian tar sands as a key reason for their action. This was an autonomous action not associated with the UK Tar Sands Network or IEN.

April 1st was both Fossil Fools Day and the beginning of the BP Fortnight of Shame, supported by the UK Tar Sands network, Rising Tide UK, the Camp for Climate Action and the Indigenous Environmental Network. The Fortnight saw a variety of actions around the country:

Then on April 10th, hundreds of climate activists in London, Brighton, Oxford and Cambridge held simultaneous demonstrations, street parties and blockades. Around 150 people invaded BP’s Shepherd’s Bush petrol station for a 'Party at the Pumps'. They hung banners off the roof, climbed on the pumps and held a ceilidh in the forecourt. The station remained closed for the rest of the afternoon – video here.

About 25 people from the Thames Valley Climate Action group reconstructed the Canadian tar sands on Oxford’s central shopping parade, including a pipeline and “toxic” tailings pond complete with toy ducks. Around 5,000 anti-BP leaflets were distributed, and video messages were collected from the public to send to BP’s AGM. Meanwhile, a “Rainbow Coalition” of Brighton activists successfully invaded and shut down two separate BP petrol stations.

Local activists from the Cambridge Tar Sands Network led an unconventional tour group through the city today. They took in the sights of RBS Branches, a Superdrug Location, and University Facilities funded by BP, all of which have links to the Canadian Tar Sands.

All eyes are now on the upcoming Annual General Meetings of BP (April 15th), RBS (April 28th) and Shell (May 18th). All three meetings will be attended by representatives from Canadian First Nations communities affected by the tar sands as well as other activists, and both the BP and Shell AGMs include shareholder motions challenging the companies' projects in Alberta. However, none of the companies are likely to make any significant decisions about tar sands at these meetings – to shut down their destructive tar sands projects for good, there'll need to be even more action throughout 2010. For starters, the 24th April - 1st May has been designated as a Week of Action against RBS.

Well done - but what about the Co-op?

Some really great actions here - well done all those involved. Exploiting tar sands has got to be one of the most short sighted and stupid ideas ever.

I don't know what people think of the Co-op but I think it worth mentioning that they've been campaigning on this issue for a couple of years and have done a great deal to put this issue on the international agenda (too corporate for a mention here? they are very progressive and democratically controlled). As a Co-op bank customer and Co-op member I've been participating in their Toxic Fuels campaign - they're funding a First Nation community, the Beaver Lake Cree, to sue the Government over the destruction of their homeland by tar sands developments (this is absolutely awesome - could you imagine any other 'business' doing something like this?), they're mobilising their customers/members to lobby their MPs, they're responsible (with others) for the Shell and BP shareholder resolutions, and they recently organised countrywide cinema screenings of tar sands films.