With the national elections less than a week away, Mayday celebrations to remember the Haymarket massacre of 1887 (and in support of worker's movements internationally) took place in many towns and cities across the UK. Despite that fact that the authorities had banned the planned march in Coventry, a spontaneous event took place marching from the Council House to Millenium Square, with a No Borders slogan reading 'Asylum is not a crime' at the head of the procession. In Nottingham, hundreds joined a procession which managed to overcome the City Council’s bureaucratic machinery. Several hundred people joined a march in Chesterfield and 400 braved the rain for Dublin's march which ended with a speech by Arthur Scargill. In Bradford people gathered on Infirmary Fields and in Manchester up to 200 joined a march, and enjoyed a firework display, and in Edinburgh about 100 joined a rally at West Princes Street Gardens.

In London, trade unionists and Communists marched from Clerkenwell Green to a rally in Trafalger Square. The four horsemen of the apopcalypse, last seen out at the G20 protests last year, were central to the 'Election meltdown' which saw effigies of party leaders dragged from their party HQs to Parliament Square for public execution, before an estimated crowd of 500. While some stayed to set up a Demockracy village in the square, many others were led to a tunnel by the samba band, for a Rave Against the Machine. 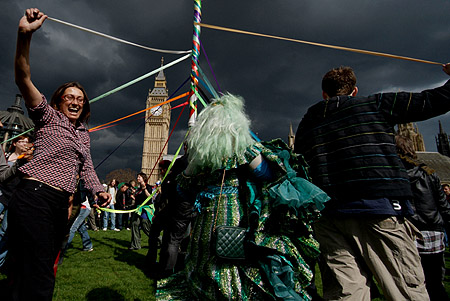