Witness evidence in the Bradley Manning Article 13 'unlawful pretrial punishment' motion hearing is now completed after 10 days and the hearing moves on to both sides presenting their closing oral arguments, starting with the defence (Bradley Manning represented by David Coombs). See Tweets below (which will be updated later), this report from Kevin Gosztola and this from Nathan Fuller, both with live updates. 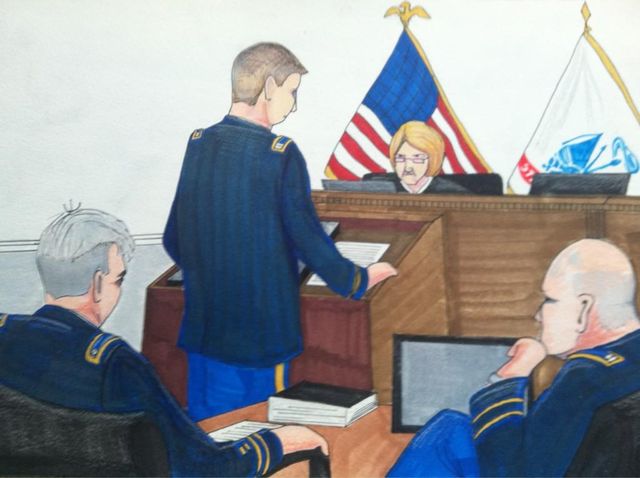 Sketch by Clark Stoeckley: "The prosecution's case is falling like dominoes"

ED PILKINGTON of The Guardian

AS: Back at Ft. Meade. 12 journalists today.

AS: We will be hearing closing arguments of Bradley Manning's pretrial punishment motion hearing.

AO: US v PFC MANNING: Def has to prove intention or conditions tantamount to torture Govt has to prove preponderance of evidence leg objective.

AS: They won't let me sit in the jury box unless the courtroom is filled. If we can fill gallery with supporters then I can get great angles.

KG: David Coombs: “Being treated like zoo animal for that period of time" had to "weigh heavy on his psyche”

AO: Coombs asks Court to ponder if Manning did not leave on 20 Apr 2011 to Leavenworth what would his custody status be?

AO: Coombs, 'No one has testified with a legitimate non punitive reason for MAX POI.'

KG: Addressing statements made by 3 Quantico officers during hearing, Coombs said, "Think each one of those perjured themselves"

AO: Coombs argued that the Brig and the USG had a clear intent, and no legitimate basis for MAX POI after 27 August 2010.

JR: Coombs: "Blenis, Jordan & Fuller perjured themselves." This is an incredibly strong statement to make to a judge. Also, perjury is a crime.

NF: Just posted a quick summary of some of Coombs' points in his closing argument: Government will argue in about 1/2 hour

Coombs cited Averhart's belief that Suicide Risk disputed language 'to be determined' and not when psych say should be removed.

JR: When Coombs said Blenis, Jordan & Fuller perjured themselves, MSM won't have a clue abt what he's referring to b/c they haven't been here.

AO: Coombs discussed with Court that Manning had *less* recreation than someone on disciplinary segregation b/w 27 August to Dec 2011.

JR: Coombs: govt put up multiple witnesses abt Manning's 1/18 anxiety attack, but not a single 1 abt underwear removal on 3/2 #B/c Indefensible

KG: Coombs: After Bradley Manning had underwear taken in Mar, clear he did "only sane thing & stopped communicating w/ these people"

AO: Barnes admitted on stand that she cited a rule under SR saying it gave her authority but she was mistaken, & staff informed her Mar 2011

SB: Coombs: the most amazing thing about this is that given his conditions, Bradley Manning didn’t totally break down: Live updates here

AO: Coombs spoke at length with the Court about the influence of Lt. Gen George Flynn, a three star general, on keeping Manning at MAX POI.

AO: Coombs spoke about directive for weekly reports being forwarded up from brig to Lt. Gen Flynn and beyond from early in Aug 2010.

NF: If Quantico thought other detainees might harm B. Manning, they could've put him on protective custody & not abused him

AO: Coombs says Flynn's influence from Aug 2010 but by March 2011 email jig is up why else would Oltman request directive 'in writing.'

AO: In the same email stream, Oltman is told that 'we are not gonna get concurrence from the Lt. Gen. in writing'.

KG: Coombs argued system fed off itself—"At best incestual relationship w/ everybody." Amazing how everyone knew each other

AO: Court asks Coombs if the Flynn had the authority to keep #Manning in MAX POI; Coombs says no its Brig Commander and should not be ARBITRARY.

AO: About to go back. Just want to say, Coombs masterfully took down prosecution's own involvement and coverup in Manning mistreatment.

KG: Coming back from recess. Govt to give closing argument soon.

MM: After bumbling like chewing-gum's stuck to their case history homework, Prosecution preps to launch attack on Manning's character

AO: Major Fein totally fucked up his argument joining possibility of MDI to POI, I predict that will come back to bite him in the ass.

KG: Fein: "In 5 min [between POI checks], that’s 5 min of potential privacy an individual gets where otherwise an individual wouldn’t"

AO: US argues Manning is flight risk, MAX determ related him being 'flight risk' that is not overt act, tied to charges & potential sentence

AO: USG argues that there is no limited on Brig Commander authority to remove clothing as security concern.

NF: Ugh. While arguing brig looked out for Manning, gov says he was "not like others," different, brig didnt understand him Live updates.

AO: USG asserts C&A board was independent. Also argues the testimony re his counselor should not have been voting member of board

AO: (A counselor who was lying to Manning saying docs kept him on POI, when himself was.)

AO: Fein does not mention that Manning was told he had to put he was suicidal down on Quantico Brig intake form per guards at indoc.

MM: Govt admits egregious conditions tantamount to punishment, deserving reduction in sentence, but FAR from owning up in full

AO: Major Fein even made sure to mention that Manning knew date of last HIV test on brig intake form.

NF: The judge says she needs lots of times for testimony to be transcribed before she can review it to make a ruling.

AS: Fein said Manning's detainment at Leavenworth was not admissible to Article 13 yet he brought up Bradley's fisticuff with a bully there.

NF: So the U.S. government argues that Bradley Manning should be sentenced to the rest of his life in prison...minus seven days.

JR: 7 days credit 4 Manning is b/c there R 7 days he spent on "Suicide Risk" when he shoulda been moved 2 "Prevention of Injury" status faster

KG: Judge Lind to USG: "How does [Bradley Manning] know he has to explain odd behaviors if he’s not asked?"