Update Saturday 19: Simon, thessaloniki prisoner, has just phoned and said that letters, which DO NOT have a return address on the ENVELOPE will not be delivered to prisoners.
If you want to send a card Simons 30th birthday is the 24th of july.
This new procedure applies to all prisoners.

Update Sunday 13: The greek government has seized the account at the Pireus bank which had been opened to receive fundings for prisoner solidarity (concerning the last EU summit in thessaloniki). It's important to avoid depositing any money into it, and to wait for more updates before sending more funds. Meanwhile for financial support please contact: financial2003@disobey.net

Thursday, July 10, will mark an international day of solidarity with the eight protestors arrested and imprisoned after demonstrations against the European Union summit in Thessaloniki three weeks ago. In London, supporters will gather at 3 pm at the Greek tourism office and the Greek airline, on Conduit Street, to raise awareness about the injustice being perpetrated by the Greek government. 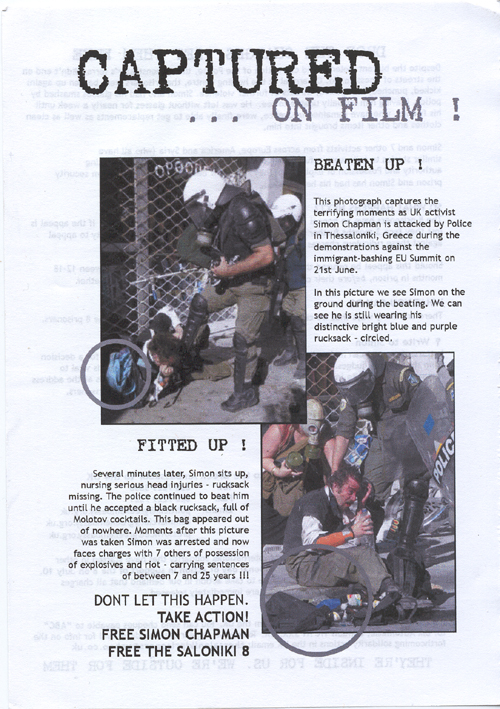 The eight are facing three felony charges, each of which entail from 7 to 25 years in jail. They have been refused bail, with seven still in prison in Greece (the eighth has been deported to his home country, the US). The seven remaining prisoners risk being kept in prison until September or for the eighteenth months of preventive detention.

The injustice involved in this case is particularly well documented in the case of Simon Chapman. Simon, a protestor from Britain, was arrested on June 21 because found - police claim - in possession of three black bags containing 7 Molotov cocktails and a hammer. He was beaten in prison and denied access to medical care, despite suffering serious head injuries and broken ribs. Only at the insistance of the British consular was a doctor was permitted to attend him.

The legal team is now circulating the photos and the video which prove that he was framed by the police. The Indymedia video, which displays images taken by the national Greek TV ET3, clearly shows that the police put the Molotov cocktails and the hammer in the black bags and then placed them around Simon. The prisoners include Carlos Martinez and Fernando Perez, from Spain; two from Greece; one who is an exile from Syria, who has been living in Greece for thirteen years; and one American. The Syrian is now facing deportation.

Already, there have been a number of solidarity actions in the UK and around Europe.
In the UK, supporters protested at the Greek Embassy in London on Saturday 28th June. At a meeting called by the Thessaloniki Support Campaign on July 1st, around 70 people crammed into the London Action Resource Cente to see the video and photographic evidence that Simon Chapman was fitted-up by Greek police.
Meanwhile, in Berlin, the Greek embassy has been occupied twice and there have been protests in support of the prisoners in Denmark and Milan. Moreover, there have been reports of sabotages against the Greek tourism office in Amsterdam.

The prisoner support group (contact: thessalonikiprisoners@yahoo.co.uk) is urging supporters to show their solidarity by attending the actions on the international day of solidarity on July 10. They also encourage people to write letters of support to the prisoners. Simons mailing address, and that of the two Spanish prisoners (letters to whom should be in Spanish) are posted below.
Supporters are also urged to write or email letters of protest to the Greek Ambassador to the UK Greek Ambassador to the UK (see addresses below).
A Greek bank account has been set up for Simon to access funds, and the UK prison support group is coordinating the transfer of money from the UK to this account.
Those wishing to make financial donations please can send cheques payable to ABC to BM Automatic, London WC1N 3XX, UK. Books (paperback only) and newspapers can also be sent, direct to the prisoners at the prison address.

More information at the wombles and Support Simon webpages.