Free 'The Saloniki 7' - Demonstration in London

On Monday 27 October there were two protests outside the Greek Embassy in London in solidarity with Simon Chapman and six other people imprisoned in Greece. The 'Saloniki 7' have been in jail since last June, when the mobilisations against the EU Summit took place in Thessaloniki. They have been refused bail under Greek "antiterrorist" legislation and they are now facing between 7 and 25 years imprisonment.

Five of the 7 prisoners are currently on hungerstrike protesting the circumstances of their arrests and imprisonment. Four of them have been without any food for 24 days, whilst Suleiman "Castro" Dakduk has already been on a hunger strike for 37 days. 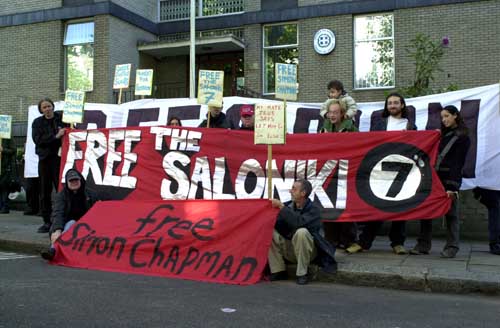 • A reflection on the state of prisoner's support in UK: Thessaloniki Prisoner Solidarity - where is it?
• A statement by solidarity hunger strikers from Thessaloniki-Greece.
• London Defence and Monitoring Group update 24th October 2003.

For donations to the campaign for the immediate release of the "Thessaloniki 7" contact BM AUTOMATIC, LONDON, WCIN 3XX, UK. For more links or to get involved email: thessalonikiprisoners@yahoo.co.uk