Recently there has been a spate of stories about social centres and evictions. At 5.30am 25th August, around 40 police and 30 bailiffs smashed down the front door of the Ex-Grand Banks in north London. This high profile centre had proven to be one of the most successful squatted community projects for some time, despite occasional police harrassment of people attending meetings there (see video). On Saturday 4th there was a street party in protest against the eviction.

Use Your Loaf, an ex-bakery on Deptford High Street which had been occupied as a centre for social solidarity since summer 2002, has also now been evicted after managing to resist eviction a week before.

Meanwhile, in Birmingham, a disused nursey has just been occupied. In Arms Reach, a squat just off Oxford Street in central London, provided a one-off week-long series of workshops, films and gigs. Back in north London, the AUTONOMOUS LAB in Chalk Farm Road, having already resisted eviction at the beginning of August, have now expanded into a second vaccant shop front!

There are plenty of other successful projects nationally and internationally as well: read on for more details...

Free cinema every wed@rampART - this wednesday is cuba night 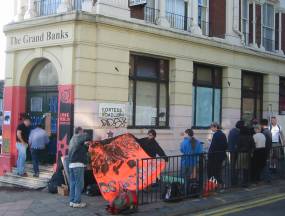 Elsewhere, last week, the eviction of the 10 year old, occupied, autonomously organised youth and community centre "Euskal Jai" in Iruna, in the Basque Country was notable not only for the strength of community spirit against police violence [video: 1 | 2 | 3 |], but also that after it was evicted and demolished, local residents immediately squatted more buildings ( one , two ) to set up new social projects.

The continuing cycle of new occupations being triggered by eviction attempts is well illustrated by the social centres in Tufnell Park. An occupied social centre at 93 Fortess Road lasted for about 6 weeks before an attempted eviction (that was sucessfully resisted). Then, at the end of February, the Grand Banks at 156-158 Fortess Road was occupied, yet another building which had lain empty and unused for years. Over the last 6 months the new social centre hosted load of events and workshops including Anti-Copyright cinema, free healthy lunch for school students, children’s days, English lessons, music nights, and the fair trade cafe supporting Zapatista communities in Mexico, to mention but a few.

Expect to see many more autonomous spaces opening soon. Following an international meeting in Berlin, there was a call for the creation of self-organised and autonomous spaces (from legally hired venues to squatted social centres) to accommodate an alternative programme of events during the ESF (14-17th October). More info: http://www.altspaces.net/

Any news from Loaf???

Nobody seems to have heard anything, what's happening? Did it happen? Was it resisted? What next for Loaf?

Events at the ex-Grand Banks

Really sorry to have lost the ex-grand banks. What does this mean for the Beyond ESF events already planned and advertised? Is the Social Centres discussion going to happen tomorrow and if so, where will it be? Please keep us posted.

what a pitty. i came from hollydays looking foward to show the social center to a friend and i get there ans i find out what happened. No real surprise though. Lets keep squatting.squat another place asap...and when they evicted you again...you squat again....and on and on and on...