A boost for video activism

While ever cheaper consumer electronics and increased internet bandwidth have made it easier than ever to make and distribute independent video, the number being made still appears to be disproportionately low compared to the number of people filming at events. Various projects have been initiated to empower more people to get involved with radical video production and screening. They include online distribution, archives, screening databases and training sessions (see IVDN, IndyPeer, IndyTorrents and Clearer Channel.

In London during January there was a video activism gathering consisting of skill sharing workshops, presentations, discussions such as the role of cameras on demos (how video can be used to get protesters both nicked and set free), along with feedback from the G8 video indymedia experience. Modeled on similar national gatherings in previous years, this one was organised by and took place at the rampART social centre.

The event ended with a public screening with films from Real2Reel, Revolt Video, Camcorder Gorillas and many others. There was also a premiere of Cine Rebeldes 'Latitude 36' and two films made during the gathering 'Justice For Dad' & 'The Demo Demo'.

Related links: UPDATE - The gathering generated a number of proposals to indymedia and have already resulted in support for uploads of 3GP and M4V formats for mobile phones and ipods etc. Further follow-up workshops will be taking place, join the list if interested. In Manchester next month there's a gathering to look at how groups currently work with each other, what resources are available for screenings and campaign work and how best to make them accessible. 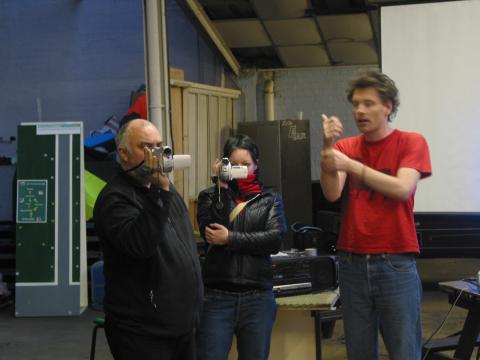