No Salute to Israel, 60 Years of Apartheid is Nothing to Celebrate

Today, a series of non-violent protest actions disrupted the 'Salute to Israel' parade. The parade celebrated 60 years since the establishment of the state of Israel in 1948. Activists wished to remind the public that since its inception, Israel has been maintained through the constant oppression of the Palestinian people, in particular through ethnic cleansing.

The 'Salute to Israel' parade was a shameful show of support to a government engaged in war crimes. Sponsors included the Jewish National Fund, an organisation deeply involved in the colonisation of Palestinian land as well in anti-Palestinian discrimination within Israel. Activists wish to stress that the British government's authorisation, protection and support of this event is entirely unacceptable.

En route, the parade was greeted by activists with red dye on their hands to symbolise the blood of Palestinians killed by the Israeli government. In Trafalgar Square, both fountains were turned red after activists poured dye into the water and a Palestinian flag was unfurled at the entrance of the National Gallery. An activist climbed up a big screen which had to be turned off for most of the event. Also, another group attempted to get onto the roof of the National Gallery in order to unfurl a banner but were arrested in the process.

Police responded by making a series of ridiculous arrests, assaulting and detaining a woman for singing anti-zionist songs and deploying Forward Intelligence Teams to monitor and follow those attending the counter demonstrations.

Several Counter demonstrations were held by Jews for Justice for Palestinians, Action Palestine and Friends of Al Aqsa while Palestine Solidarity Campaign and others drove three double decker buses draped with Palestinian flags and black balloons around the square and Rhythms of Resistance tried to drown out the Pro-Zionist hip hop gig. 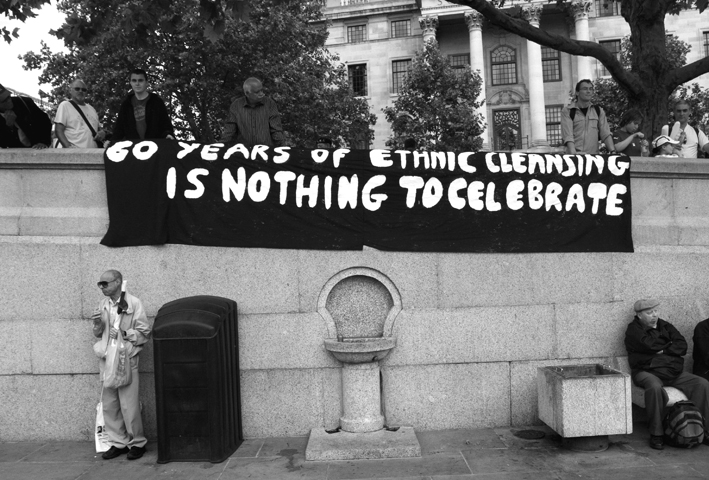 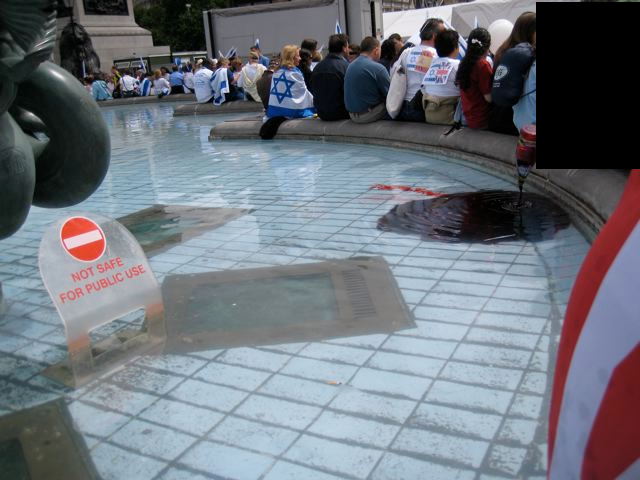 Protester pours "blood" into the fountain at Israel rally 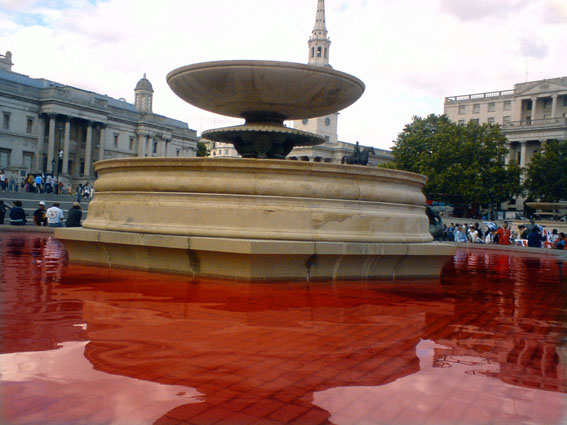 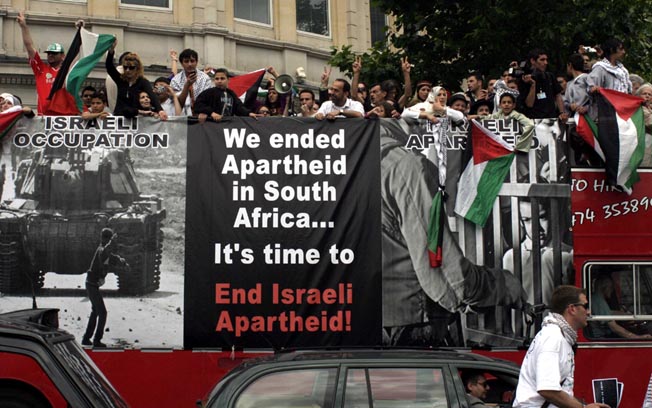 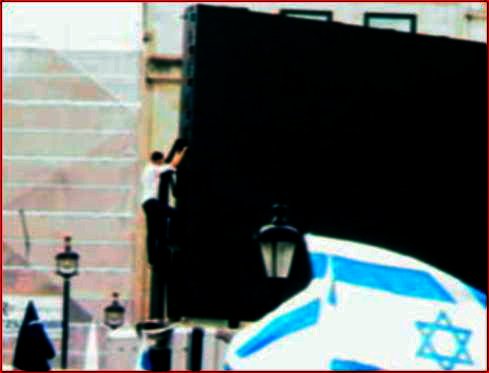 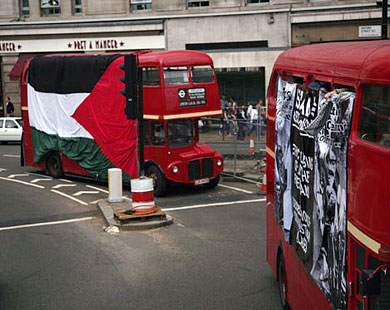 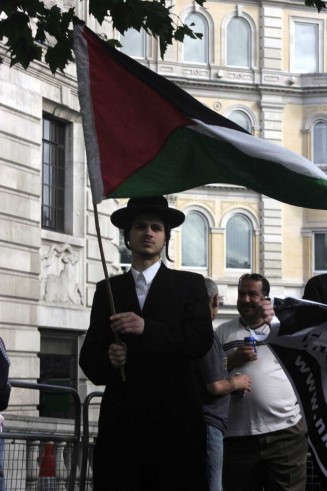 Deir Yassin and Tantura are but two of the most (in)famous massacres perpetrated by Zionist forces against Palestinians in 1948. Over 530 Palestinian towns and villages were destroyed, and nearly two-thirds of the native Palestinian people, around 750 000 people, were forced to flee.

Ethnic cleansing continued beyond 1948, including all-out massacres and military attacks, house demolitions and unceasing oppression by the Israeli military occupation in the West Bank and Gaza. The Apartheid Wall, mostly built on Palestinian land, is one of the means through which the Israeli government attempts to annex Palestinian land without its people. In Israel, politicians, the media and a section of public opinion openly evoke the 'transfer' of Palestinians whom they describe as a ‘demographic threat’.

Despite this politicians like Ed Balls and Boris Johnson turned ut to give their 'salute' to Israel. Justifying the Israeli states illegal policies over the last six decades.

The proliferation of counter demonstrations and autonomous actions against the march are an indication that the Nakba is not forgotten, that there is a growing movement in solidarity with the Palestinian people and that more and more people are willing to take direct action to confront and unmask Israeli apartheid