The G8 2008 took place in Hokkaido, Japan, from July 7th to July 9th. As in the past years, people from all over the world protested against this summit and the capitalist system it represents [Pics] both in Japan and in many places around the globe.

On Saturday the 5th of July, the International Day of Action Against the G8,there were protests worldwide against this year's G8 Summit, including London. A picket outside the Japanese embassy took place on Friday the 4th, and for Saturday the 5th, and despite previous harassment by the Metropolitan police, a London Fete Against the G8 was called by London No Borders and other groups to demonstrate in solidarity with the protests in Japan, for the Freedom of Movement, and against Fortress Europe. The Day of Action around the UK Borders Agency started with a Critical Mass bike ride from Brixton to Croydon, the nerve centre of the Home Office's UK Border Agency, where several protests unfolded.
Report | Photos 1 and 2 | Video

From Monday 7th to Wednesday 9th, further days of action and blockades continued around the Summit location next to the Lake Toya in Hokkaido [Videos 1 | 2 | 3 | Timeline (en)] The Japanese 'No! G8 Legal Team' issued an international call for further solidarity actions during the week of Summit blockades [Second Call]. In London, a daily NO!G8 cafe was organised at the Bowl Court Social Centre to coincide with the G8 mobilisations, showing daily footage from Japan, screening films, presentations and discussions.

Check the Ticker, the G8MediaNetworkTV and IMC-Japan [Timeline] for updates of worldwide actions and protests. 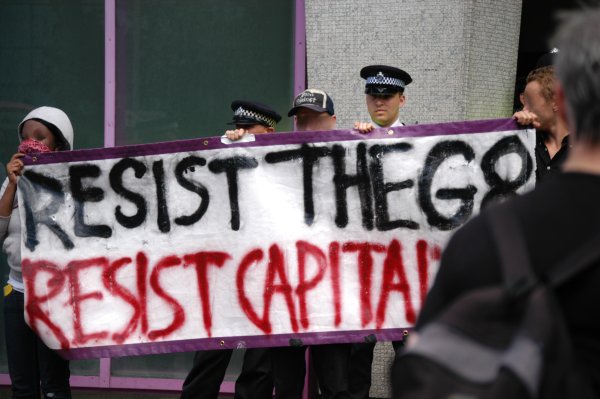