By now the glad tidings that ninety of her majesty's most loyal subjects were happy to celebrate 60 years of her reign by kipping under a bridge before a joyful thirteen hour shift of telling union-jack-sporting buffoons the way to the big river in the middle of London without being paid has been splashed all over the papers. But it's just the tip of the iceberg.

From Corporate Watch: Benefit claimant forced to accept Jubilee steward position for less than minimum wage | To pay or not to pay: Asda and Argos choose workfare over work | Regulating workfare (or not)| 'It's exploitation and it's repellent': Retailers, councils and charities benefiting from workfare | Unemployed people bullied into work 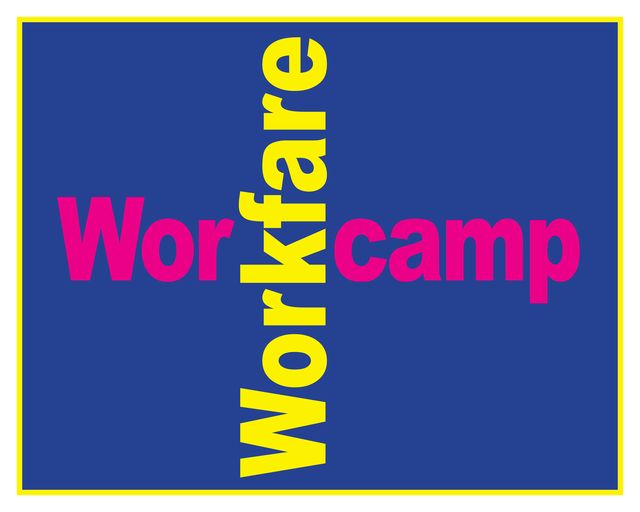 Eighty unemployed folk from Bristol, Bath and Plymouth were forced into the unpaid work by agency Tomorrow's People – yet another private company gorging itself on the welfare budget by claiming to provide a route into paid work. They were bussed into London by Close Protection UK Ltd in the early hours of Sunday morning and told the only accommodation available was to doss down under London Bridge. Fifty of them were paid an apprentice wage of £2.80 /hr for the fourteen hour shift that followed, the others were told the whole thing was 'work experience' for potential roles during the Olympics. An 'apprenticeship' in directing people to the toilets – only in Cameron's Britain.

Now, this bunch of chancers have unwittingly shone a light into the murky world of Workfare, where big business gets a labour force without the hassle of having to pay them. Workfare isn't a single program, according to the Solidarity Federation in their excellent pamphlet on the subject. “Workfare is a term used to describe a range of schemes in which people are forced to work without wages in order to receive their benefits. After recent controversies the government has sought to obscure the nature of its workfare golicies”

Close Protection UK are of course now being singled out as bad apples, with questions about their contract to supply fire marshals for the Olympics. A government spokeswoman said: "This is a one-off … This is an isolated incident. The company has apologised." – well they would wouldn't they?

However SchNEWS is positive that the whole barrel is positively stinking. We spoke to others pushed into crowd control for the Jubilee by the dole office. One told us “I was told to apply for this job under the usual sanction of potentially losing my benefits even though at that time I'd only been signing on for a week” This was a paid position but the job,with Vespasian security, was advertised at £6/hr, (below the minimum wage). The accommodation was a campsite in Essex and stewards were expected to supply their own tents and sleeping gear. Our interviewee worked three days, the first shift was 4am until 7pm, a ball-busting 15 hours, followed swiftly by 11am to 12pm then for a finale 6am to 6pm. “The worst thing was the fact that when travel time to the camp site was factored in we only got two hours sleep on the second night”.

Of course the Jubilee was a one off occasion (although all the same stuff is going to happen on a grander scale at the Olympics) but Workfare is simply the new way to do business. It's got bugger all to do with creating jobs - every time a company gets someone to work for free or below minimum wage they're not likely employ someone with a regular contract and all the tedious employees rights that go with it. Free staff also mean cutbacks on overtime, especially hard for those relying on extra hours to make ends meet.

The workfare agenda is all about breaking the lowest sectors of society to the will of the highest – forcing us in a time of austerity into competition for the scraps thrown from the table. In effect it as a massive public subsidy to big business and a weapon against those who want better pay and conditions. It's also set to be rolled out across the unemployed population to an unprecedented extent.

The fightback is gathering pace though and the jubilee shenanigans have underlined the point. While the campaign against workfare continues to go from strength to strength, the government’s workfare policy continues to flounder. A recent conference – 'How do we break workfare?' was organised by Brighton Benefits Campaign. Ideas and information were shared and ways forward planned, including a week of action from 7-14 July, counter conference during the Welfare to Work convention (10-11 July), and a national boycott of Holland & Barrett – enthusiastic participants in the workfare schemes.

According to them “The message is clear. Those of us who oppose workfare in all its forms are winning. There has never been a better time for you, your workplace and your union branch to get involved and say no to workfare. After all, we know where we are going. Come with us. We are going to win. Boycott Exploitation. Boycott Workfare.”