Thousands marched in London on 5th August, 2006, to protest against Israel's attacks on Lebanon. Starting at Speakers Corner in Hyde Park, the march went via the US Embassy and Downing Street to Parliament Square. The demands of the march were for an unconditional ceasefire, to stop Israel's attacks on Lebanon and Gaza and to end Tony Blair's support for Bush's wars. The demonstration follows 30,000 people demonstrating in London two weeks ago and many smaller protests around the country.

In front of the US Embassy: "territorial support group police suddenly flooded the road and formed an arbritary barrier in the middle of the crowd. They then began pushing forward, shoving and occasionally hitting people in a pointless show of thuggery. There were several arrests and then they were suddenly recalled and the march returned to peace."

Outside Downing Street: "Hundreds of empty tiny children's shoes symbolising the outrageous number of child casualties were piled up there which made a very poignant display."

The Rhythms of Resistance samba band staged a die-in opposite Downing Street: "Others gradually joined the sit-down, although stop the war coalition stewards were urging the passing crowd to not join in, and police quickly surrounded the sitting protestors. After some twenty minutes, the samba band moved on, but some activists tried to use pipes to lock on on the ground, and were viciously arrested by police before they managed". 7 Anti war activists were arrested outside Downing St

At Parliament Square there were speaches including one from Bruce Kent, "The other day, I was in Downing Street, handing in a petition against replacing Trident, and I thought how wonderful it had been if I had taken in a warrant from the International Criminal Court, and I was offering it to Mr Blair and a policeman would arrest him. That’s a dream that will come one day. This is a war crime.”

The policing of the demonstration was heavy handed and reflects the slide towards fascism. 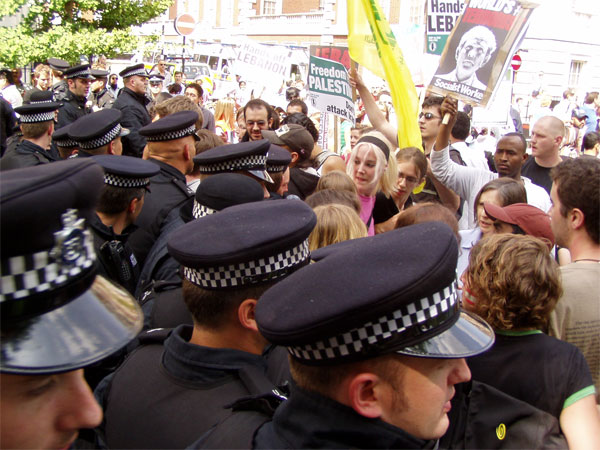 a line of thugs right across the road

Israel has been targetting civilians, journalists, the UN and ambulances using cluster bombs, depleted uranium munitions, bunker busters flown in via Scotland and a catalogue of other illegal weapons. It is well known that the USA is the main source of Israeli weapons. According to UNICEF: "Thirty per cent of those who have died are children and 45 per cent of those who are displaced are children".

The capture of two Israeli soliders, which has been used by Israel to justify the attack on Hizballah, has been shown to be a pretext: "Israel's assaults on the Occupied Territories and Lebanon were planned well in advance with the full knowledge and approval of the US." The Israeli government was given the green light to attack Lebanon by the United States and the other states attending the G8 in Russia. The US-Israeli goal for Lebanon appears to be, as a minimum, regime change or worse, total annihilation, as with the wars in Iraq and Afganistain the role of oil appears to be key. Wider Middle East war was predicted at the end of June and the unfolding events appears to be part of an imperialist carve up of the Middle East.

One response, from a branch of the CNT in France has been to say: "Just as we firmly denounce this military escalation, calling for an immediate cease-fire, and an end to the bombings, and withdrawal of Israeli troops from Lebanon and the Occupied Palestinian Territories, we believe, as internationalist workers, that one of our urgent tasks is to support the development of a third camp - the camp of the workers - in the Middle East, at one and the same time against imperialist domination and against Islamist oppression." Sacked Liverpool dockers have called for sanctions against Israel.