Cases against people who refused to complete the 2011 census in England and Wales are starting to come before the courts. Judith Sambrook, who declined to fill in her form in protest at the government's contract with WMD manufacturer Lockheed Martin to process census data, had a preliminary hearing at Wrexham Magistrates Court on Remembrance Day 11/11/11 with her case now adjourned to 8 December (tbc). Over 20 supporters attended the court in solidarity with Judith to demonstrate against Lockheed Martin and the wars it fuels, holding a vigil at the war memorial afterwards. Other known cases are in Liverpool on 8 December, Reading on 13 December and Birmingham on 5 January. There are bound to be more in the coming weeks and months. 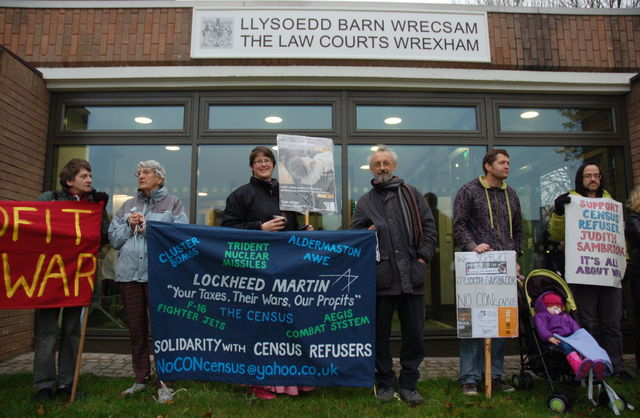 Although no figures are available yet, it is likely that the 2011 UK Census has been widely and variously resisted by outright refusal to comply, active and passive avoidance tactics and creative completion of the forms. There are many reasons for people to resist the census, but the awarding of census data processing contracts to Lockheed Martin (England and Wales) and CACI (Scotland and Ireland) has been a major factor in resistance in 2011. Lockheed Martin is one of the world's largest weapons manufacturers, with Trident nuclear missiles, F-16 fighter jets, cluster bombs and the Aegis Combat System among its products (more details in this article). Both companies are implicated in human rights abuses at Guantanamo Bay and Abu Ghraib prisons. There are many concerns about data security, particularly in light of other major data security lapses, a recent Lockheed Martin security breach and a statement by Vice-President of Lockheed Martin US that “We want to know what’s going on anytime, any place on the planet”.

Lockheed Martin also had a contract for processing census data in England and Wales ten years ago for the 2001 census, but objectors have been more effective at getting the word out this time round, with opposition coming from a wide range of groups and organisations.

Last time round, in 2001, a Freedom of Information request revealed that there were a reported 39 census related prosecutions, with all but one of the defendants found guilty. According to the Guardian, this was from a total of 3 million people who didn't fill in their forms.

Judith Sambrook, 47, is mother of five and a single parent with two primary age children. She has kidney failure and spends three days a week in hospital on dialysis. Judith has said that once she was aware of Lockheed Martin's involvement in the census, after reading an article in the Guardian, she could not conscience completing the form given Lockheed Martin's business of manufacturing arms including weapons of mass destruction and its involvement in human rights abuses at Guantanamo and Abu Ghraib where it provides contract interrogators. Judith entered a plea of not guilty in court on 11/11/11 and is planning to run a human rights defence in her case which will question whether the state has the right to come between a person and their conscience. In a statement to the Shropshire Star, Judith said: “I will risk the threat of prison because I am not going to pay any fine or sign that census form. This is an important fight and campaigners around the world are showing solidarity.”

Sarah Ledsom, 56, of Bromborough, Wirral, a grandmother who suffers with a disabling chronic condition, is due to appear at the Magistrates Court in Liverpool on Thursday 8 December. Sarah's objections to completing the census relate to the contract with arms manufacturer Lockheed Martin for processing census data. Sarah refers in particular to the use by Israel of deadly Lockheed Martin weaponry on the people of Palestine.

Deborah Glass Woodin of Oxford, green activist, mother of two and widow of Mike Woodin, is due in Reading Magistrates Court on Tuesday 13 December at 10am.

Following a pattern with all cases we've seen so far, her case will not be heard at her local magistrates court, but at one miles away in Reading. Inconvenient for Deborah, but nicely situated for Aldermaston anti-nuclear activists! Lockheed Martin jointly runs Aldermaston AWE as well as having a £5.3 billion contract with the government to develop new illegal weapons of mass destruction there.

Deborah has given four reasons for her census refusal:
1) The link with Lockheed Martin (brought to my attention through printing a leaflet about it at Oxford Greenprint Workers Co-op of which I am a member)
2) The statement on the front of the form about using the information to help decide where schools and hospitals should be built: I wish this were true, but these decisions are driven by money, not need (as my time on both Councils has shown).
3) The number of questions not related in any way to anything but 'big brother' monitoring eg religion, nationality.
4) The Census in this form is to be scrapped (Daily Telegraph June 2010). It only ran this time because contracts had been signed and heavy losses would have been incurred. It is acknowledged to be a hugely inefficient way of collecting this data.

She also says: "I was an active Green Party member for many years and have been a City and County Councillor for the Greens in Oxford. I have always been an activist and until recently believed that the best way to change the world was working with the system. I feel somewhat more cynical and less naive now!"

Roger Grenville, 66, a former Local Government Officer and local Councillor from Leamington, Warwickshire, is in court in Birmingham on 5 January.

Roger Grenville: "I did state to the officer who initially visited me to chase up the form that I was not completing it because of the involvement of Lockheed Martin. When I was later interviewed under caution at home by two Enforcement Officers, I again repeated that I was refusing to complete this year's Census on grounds of conscience because of the involvement of Lockheed Martin.

"I have no intention of paying any fine or any costs. As a taxpayer I have already contributed to Lockheed Martin's profits and it is not my intention to give them another penny. Perfectly happy to be given a custodial sentence in lieu of fine."

Solidarity for Judith Sambrook's census resistance has come from far and wide, including Canada where there is ongoing resistance to Lockheed Martin's involvement in the Canadian census. Many people at Occupy LSX and Finsbury Square in London also sent solidarity messages. Others sent messages of support via email. Supporters at the court came from Wrexham, Flintshire, Shropshire, Wirral, Liverpool and beyond.

NoCONcensus and others are building a solidarity network to support all those who face court hearings.