Between 10 and 100 thousand people (eleven ?) from all over Britain marched against the occupation of Iraq in London yesterday.

Simultaneously, in Edinburgh a banner drop and a rally took place, whilst it was streaming down with rain. 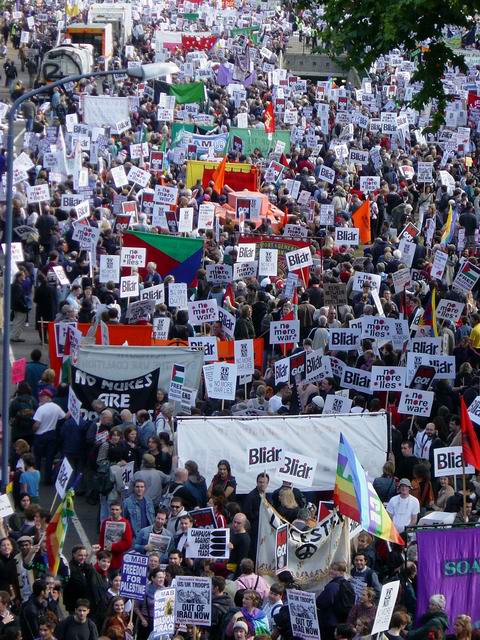 Between 10 and 100 thousand people marched + Dorset Stop the War call for help on Tuesday.

Around 40 protesters coached up to London to join marchers from all over the country. There were banners from Derby to Exeter, Sheffield and Nuneaton to Southend and Dorset. People from the length and breadth of Britain were in London for the march. Most international newswires say there were 20,000 of us. (This may not sound a lot but compare it with the 4-5,000 in Turkey or the 3,000 in Paris.) In the spring I was uncomfortable with the chant 'Bush, Blair, CIA, How many kids did you kill today?' but yesterday, it was sickeningly true. Reliable Sheffield Samba were there and so was the brilliant band on a trike (who *are* those guys?) who rapped for a solid 3 hrs really funny songs and biting satire. Where did it get us all? Who can say but it can't be totally ignored. There were a lot of foreign correspondents there (I spoke to a Chinese reporter). The speakers included a Union rep who was vociferously against Blair's form of government and what with the Labour Conference coming up this week, that can't be a bad thing. There were two school children reps, one was 11 yrs old and spoke to very loud applause - as she said 'We are your future' and our masters ignore her at our peril. The mood was only sometimes angry but everyone seemed totally aware of why they were there, I mean not wishy washy stuff but marching against specific wrongs. One 70 yr old literally grabbed my arm under Eros and angrily asked why no-one was protesting against Bush - my banner was UK/US out and there were loads of other anti-Bush slogans and so on - but my point is that she was really involved though she hadn't joined the march. (I did a bit for indymedia by chalking it on the paving in a few places.) Sorry -no pics cos the camera's being crass again, but there are loads on London indymedia

There was a call from Dorset Stop the War to join them in Bournemouth on Tuesday to deomonstrate against Blair when he makes his big speech.

Where did you get your figures from, the BBC? I saw that the BBC said there were a few hundred in Austria, Germany, and France, but they also said in early reports that there were 2000 in London. Obviously they were lying. I think there might have been more than 20-30,000. The organisers usually overestimate, which means that the best bet is on something in between - perhaps 50-70,000? I've been to a lot of demos, and at its height, this really was a huge one.

It was good to hear so many of the speakers support the Jewish peace campaigners, and wish them a happy Jewish new year.

Just sorted out my photos from the day and published a few:

May I point readers to yet another page of pictures? Try this one:

Here's something I emailed to a friend. In York, on March 15th (Sat before Day X), we had a demo where the organisers said 3500, and the police said 5000. Yes, police higher than organisers, incredible. I'm trusting the authorities in this piece...

"Apparently the Police estimate the demo was
only about 10,000 people. Or rather, the police estimate as issued by the
home office, has only 10,000 people in it. The organisers said, erm,
100,000. I'm starting to wonder whether that was true, though thinking of
it, it took about 10 minutes on the York 5000 demonstration for everyone to
arrive at the Minster, and if anything the street was wider for the last
bit. (Remember that not everyone actually went to that bit, some just
wondered off when they saw the end in sight, so I shall assume that happened
to the same extent yesterday. That being so, it took around 3 hours for
everyone to arrive in the square yesterday, which means 5000 x (6 lots of
10mins / hour) x 3 hours = 90,000 people. That's about 9 people / second,
fast but not unrealistic, seeing as I think people were arriving none stop
from 1:30ish to 4:30ish, maybe later, and I know many didn't come into the
square, maybe only around 50-75%. And some people with arthristis might have cut to the rally. Some people are just getting bored of endless speeches at rallies, though. I'd like to know how trade went in the nearest pubs."

Yes, I'm sad enough to work this stuff out, I'm a bit of an amateur statistician. (Yeah, lies damn lies and stats, I know!) I happen to enjoy working this out. If I could be bothered, I'd reprint my spiel on how the Guardian poll after Feb15th (1.3M households represented) could be taken to show that 2.6million marched. All interesting stuff, if you really care. Just trust me, this may seem weird, but I know that that demo was over 80,000 people, end of story. If it was 120,000 I'd be unsuprised.

Above all, it rocked, thankyou everybody.

Remember remember the 19th 20th and 21st of November. Anarchists, stop the country, everyone else... DEMO ON!!!!


I just really want to thank everyone for being at the march because I was so happy to see that the pressure is still on and that people are commited to keeping true to the honest evoloution of our species. Lets not get bogged down in numbers. We were there thats enough. It was great. The atmosphere was full of hope that we are still here against the injustices and that we will not go away till we achieve the peace we know is possible. Thank You All for being there for giving me hope and strength to continue and to the Krishnas for feeding us so generously with their free food. And to the sun for making us have no excuse to stay at home . See You all and all your friends next time, whatever the weather.

More colourful photos of the day...

It's important to get Demo figures right

I think it's unfortunate that the main report on the STW Demo on 27th September gives any credence to the figure of 10,000 people attending. I was at standing in the balcony of the National Gallery and watched Trafalgar Square filling up with people, there were also people leaving too. Trafalgar Square holds about 80,000 people according to old news reports of past New Year's celebrations. On this basis alone it seems a total distortion to give a figure of 10,000.
This demonstration was around 100,000 people.
I don't think it's easy to judge the size of demonstrations - if you count how many people pass a certain point over a period of time you forget that demos are not like military parades or marathons, they are irregular in density and speed, people join during the march and people leave before the end.
This isn't about statistical accuracy it's about the fact that the police regularly underestimate the size of demonstrations as a means of control. If the many thousands of people who spent weeks working hard to build this demo think that the result of their labours is a small demonstration they will be disheartened by that. Those that don't attend believe the movement has dissapeared and those in power can convince themselves that they've got away with the war.