Protests and Blockades Against the Attack on Fallujah

Since the latest round of attacks on Fallujah by "coalition" forces started in earnest two weeks ago, and amid fears of a massive civilian death toll in the Iraqui city, London has seen a series of protests, actions and blockades in the Whitehall and Westminster area.

These started on Sunday 31st October with road blocks and the scaling of the gates to Downing Street, as well as the Foreign Office being splatterd with blood red paint [pics]. On Sunday 7th, there was a protest at Parliament Square, followed by campaigners laying flowers at the Cenotaph, before locking on and blocking Whitehall [see reports and pics 1, 2, 3, 4]. The next evening, on Monday the 8th, demonstrators meet up for non-violen direct action against the attack. They started by blocking the road at the top of Whitehall, followed by a loud protest in Leicester Square where the Queen was attending a cinema premiere. The action ended with a blockade in Picadilly Circus [Report]. On Wednesday the 10th demonstrators blocked Piccadilly Circus [Report and Pics]. And on Friday the 12th a rally for peace and protest against the attack on Fallujah took place in Brixton.

For more information on protests around the UK see: Indymedia-UK full feature

Photos from Fallujah | Interview with a Fallujah refugee 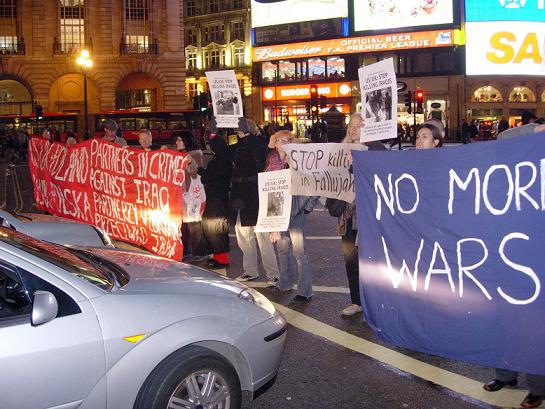