This last year has been a pretty active and productive year for the social centres movement in the UK...

At the begining of the year, the Wombles occupied 93 Fortess Rd for several months before moving into the ex-Grand Banks in Tufnell Park. Both occupations saw successfully resistance against eviction and were highly successful and popular. After eviction in August the wombles took a break to concentrate on the 'Beyond ESF event' but they'll be back in 2005.

Perhaps also to return in 2005, Use Your Loaf, an ex-bakery in Deptford which had been occupied as a centre for social solidarity since summer 2002, but was finally evicted in September. Currently without a building, the collective has remained active and are having a xmas party this coming Friday.

Also having a party on the Friday 17th AND Saturday 18th Dec, the 'rampART' in East London [details] . The building opened around six months ago and has been host to a wide variety of political and cultural events. To celebrate and raise funds to cover bills, there is a two day festival with bands, workshops, DJs, fashion show, VJs, films etc. Full details on www.rampart.co.nr

In Birmingham, a disused nursey was occupied and is now on the verge of possible eviction. Last week saw resistance against eviction (see photo) and we await news. http://stuffit.org/nursery/

Oxford enjoyed a series of three short lived squatted social centres using the name OCSET. All were quickly evicted but there will certainly be another openned in 2005. 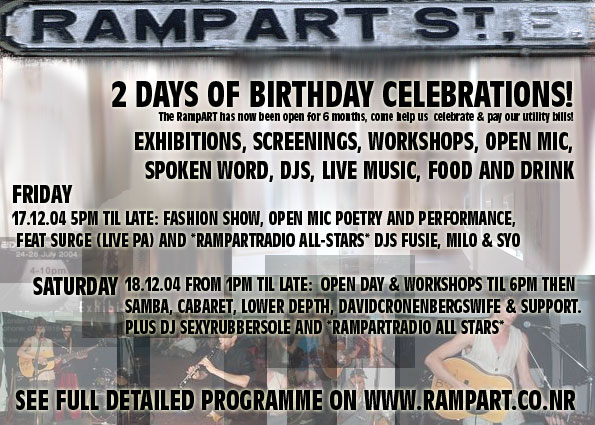 The term 'autonomous spaces' exploded into peoples consciousness during the ESF period and many attending were profoundly inspired by the autonomous space and associated projects.

In Hunguary a vast supermarket in the centre of Budapest which had been empty since 2001 was occupied just days after people returned home inspired from the ESF in London. Plans were to create a social and cultural space and a place to organise established projects such as food not bombs, indymedia, and other cultural and political collectives. They recieved a great deal of media attention and were evicted just two weeks later. There are many abandoned buildings in Budapest plus 30,000 homeless people but this was the first squat for a long time. Hopefully not the last! (http://www.squat.net/en/news/centrum_budapest081104.html)

Also opened in october, the Maelstrom Anti-Repression infosquat in Leeds.
An attempt to launch discussion , criticism and action against surveilance, new technologies of control, prisons and the panoptikon society. http://www.indymedia.org.uk/en/regions/leedsbradford/2004/11/300990.html
Subjects covered have included nanotechnology, biometrics, new repressive laws, security culture, CCTV, ID Cards, the draft mental health bill, the prison society and prisoner support. Maelstrom is still going strong and will certainly be an ongoing project for 2005, perhaps in a bigger building.

Other squatted social centres and similar projects in 2004  included In Arms Reach just off Oxford Street in central London which provided a one-off  week-long series of workshops, films and gigs. In north London, the AUTONOMOUS LAB in Chalk Farm Road, had an interesting evolution since it's orginal openning by London Rising Tide for a one week alternative art gallery. The space continued to function as a political space and resisted eviction in August. It expanded into a second building but suffered ongoing disruption and violence from a local gang. The recent Indymedia London party after the anarchist bookfare made use of a squatted theatre in North London which continues to be used a community project space.

There are many other autonomous social centres that have been established much longer, such as the Sumac centre in Nottingham, the 1in12 in Bradford, LARC and Freedom in East London, 56a in South London, the Autonomous Centre of Edinburgh, Kebele in Bristol, and the Cowley Club in Brighton - all of which are purchased spaces and always in need your active support.