One year of DIY culture

The UK has had its share of squatted political spaces over the decades but the last few years has seen something of a resurgence in activity, inspired by the strong social centres movement found in Spain and Italy etc. Social Centres have been springing up all over the country but their existence is often precarious, dependent either on maintaining rent or retaining a squatted property.

The average lifespan of a squat typically clocks in at around three months. However the rampART (www.rampart.co.nr) will be celebrating its first anniversary this weekend (21st May)

Established May 21st 2004, rampART took it's name from Rampart Street E1, home of the abandoned warehouse which was previously used as an Islamic girls school. For the last twelve months the derelict building has hosted over 100 cultural and political events - placing the rampART firmly and literally on the activist map of London (see ramPARTY details and lineup) 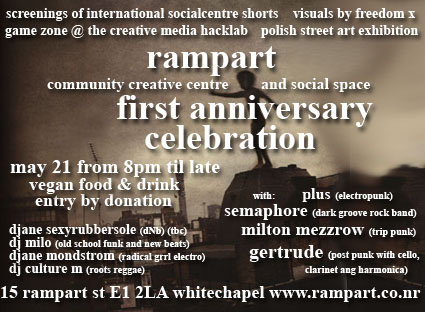 ramPARTY flyers for 21st May

In 'Fences and Windows' (2001), - Naomi Klein wrote, "Social centres are abandoned buildings - warehouses, factories, military forts, schools - that have been occupied by squatters and transformed into cultural and political hubs, explicitly free from both the market, and from state control... Though it may be hard to tell at first, the social centres aren't ghettos, they are windows — not only into another way to live, disengaged from the state, but also into a new politics of engagement. And yes, it's something maybe beautiful."

Established May 2004, the rampART is one such squatted social centre. It takes it's name from Rampart Street E1, home of the abandoned warehouse which was previously used as an Islamic girls school [ http://squat.net/en/news/london220504.html ]. For the last twelve months the derelict building (managed under the principles of consensus and non-hierarchical DIY culture), has hosted over 100 cultural and political events - placing the rampART firmly and literally [ http://www.redpepper.org.uk/Oct2004/ESF/ActivistMap.pdf ] on the activist map of London.

For many people the rampART has been a venue for many gigs and partys but the rampART is a highly political space and this is reflected even in the partys. The massive free festival for peace [ http://lists.indymedia.org/pipermail/imc-london/2004-September/0910-au.html ] organised by The European Creative Forum and Peace Not War was accompanied by an afternoon of workshops. Likewise the recent benefit party for the Hacklab which combined information and discussion about the threat of software patents [ http://london.pm.org/pipermail/london.pm/Week-of-Mon-20050404/031284.html ].

The rampART has remained a not-for-profit venue. Entrance is always free or by donation, nobody gets paid and the venue never asks for a cut. Thousands of pounds have been raised during benefit events for groups and campaigns such as London Rising Tide, PeaceNews, Real2Reel [ http://www.indymedia.org.uk/en/2005/04/309073.html ], and Indymedia. Argentinian, Bolivian and Chillean solidarity groups have raised money for political prisoners and more recently there have been groups fund-raising for the anti-G8 mobilisations later this year.

Many of the acts who've performed at the rampART have become regulars and the band Gertrude used the space to record tracks for their next album which carries the working title 'ramparts'.

Beyond parties, the rampART has also hosted meetings, discussion and gatherings such as a week long ‘Venezuela Solidarity’ event [ http://www.thenewagenda.org/latinamericanliberation/pages/programme.htm ] during the Hugo Chavez referendum, a week-long series of talks, films, food and discussion about Africa [ http://www.indymedia.org.uk/en/2004/11/300493.html ]; and the highly ambitious consious fashion week [ http://www.indymedia.org.uk/en/regions/london/2005/02/304677.html ].

Amoung the groups which have used the space for meetings are the International Solidarity Movement, the European Creative Forum and London Adbusters. More recently the rampART became the training ground for Clandestine Insurgent Rebel Clown Army. [ http://www.indymedia.org.uk/en/2005/03/307900.html ]

Other screenings have ranged from fictional films such as Fight Club, They Live, and Solent Green to documentaries including The Revolution Will Not Be Televised, The Globalisation Tapes, and Forth World War. Prior to it's official debut, Michael Moores 'Fahrenheit 911' was premiered at the rampART on the 4th July as part of an ‘Independence FROM America’ themed evening. At it's peak, 120 people squeezed into rampART's main room for a documentary about McLibel and a sneak premiere of ‘Supersize Me’ [ http://www.indymedia.org.uk/en/regions/london/2004/09/297110.html ].

Another project to have emerged from the rampART is the internet radio station, RampART radio, which was set up to provide independent coverage during the European Social Forum last October [ http://bellaciao.org/en/article.php3?id_article=3748 ]. Streaming 24/7, it's output is a mix of independent news, spoken word, plus conscious and revolutionary tunes. Many of the events that happen in the hall have also been streamed live and there is a diverse programme of live shows appear with varying regularity and tardiness. It's not unusual to catch impromptu interviews with interesting people who have been forced into the studio while visiting the rampART.

While the rampART has always sought to remain a nonresidential project, it has always welcomed guests and over the last twelve months numerous overseas visitors have enjoyed free accommodation while on missions in London. This invaluable opportunity for cultural exchange has enriched and inspired everyone involved. During the European Social Forum, the rampART opened it's doors to accommodate over 50 European visitors as well as laying on free food and a huge range of entertainment [ http://www.wombles.org.uk/news/article_2004_08_12_0022.php ]. Additionally, as one of the ESF autonomous spaces, rampART hosted the Home Education Forum and acted as homebase for the European Creative Forum and the Laboratory of Insurrectional Imagination.

Of course it's important not to forget the ART in rampart. The venue has hosted the fresh talents of wide range of artists - from the mixed media of ‘a beginning...’ [ http://rampart.omxtra.net/modules/xoopsgallery/view_album.php?set_albumName=album02 ], the hardcore photos of ZDO9 [ http://rampart.omxtra.net/modules/xoopsgallery/view_album.php?set_albumName=album01 ]; the performance art from 'chikukuango'; thought provoking sculptures in 'the body', a the hard hitting installation 'the election'. Not to mention providing the floor space for the creation of many of the large banners seen at protests during the last year.

The events being held at the rampART in the next month include an exhibition of Polish street, latin american day school, G8 Bike ride benefit CYCOLOGICAL II, and a London Zapatista Support Group benefit event. Nobody can predict what the future has holds for the rampART however it is clear that it will remain an important part of London's counter culture as long as it remains.