Tens of Thousands Say 'NO to Trident, NO to War'

Called by the Campaign for Nuclear Disarmament, in conjunction with Stop the War Coalition and the British Muslim Initiative, tens of thousands marched in London on 24 February, 2007, to protest against the Trident and against the imperial wars in the Middle East, including Iraq and the looming one on Iran. People were there to express their opposition to militarism, the 'war on terror' and demand justice for Palestine. Scotland for Peace's "Bin the Bomb Roadshow" also ran between 16 and 24 February, culminating in a march and rally on 24 February in Glasgow.

There was a small autonomous block on the demo [photos], but was apparently the focus of most of the policing and 'intelligence gathering' (see this Met leaflet). 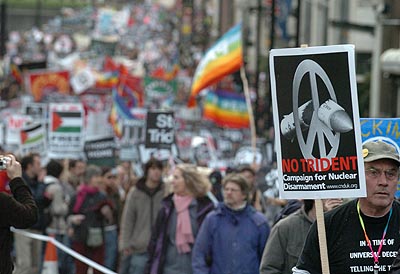 Anti-nuclear activists and campaigners have been in overdrive in recent months, following the publication of the government's defence White Paper in December. The White Paper outlines plans to replace/renew Britain's nuclear-armed submarine fleet and also suggests timescales for upgrading the Trident missiles and warheads which the submarines carry. Each of the 200 warheads in Britain's current Trident stockpile has a destructive power equivalent to eight Hiroshimas. The cost of renewing Trident is estimated at around £20bn initially, and up to £76bn over its deathspan.

In the week running up to the 24 February, demonstrations, campaigners projected a massive "No Trident replacement" banner onto the House of Commons, and well-known artists from the world of mainstream culture lined up to make their opposition to Trident public.

The government is expected to hold a parliamentary debate and vote on its proposals in mid-March. Greenpeace and CND are both asking for people to lobby their MPs to vote against the government. A diverse range of groups are planning events and actions for the day of the parliamentary vote and have set up a single website - tridentvoteday - with further information and links.
As part of the "Trident: we don't buy it" tour, Greenpeace ship the Arctic Sunrise is expected to dock in the Thames in advance of the vote, to lend its support to the call for "No Trident" and arguing that the money would be better spent on tackling climate change.

Trident Ploughshares affinity group the Muriel Lesters have called a two-day event in London over the weekend of 24-25 February, with a "hunt the proliferators" action on Monday 26 February. TP have also called a blockade of AWE Aldermaston for 10 April.

To facilitate the development of new warheads, Britain's Atomic Weapons Establishments (AWEs) Aldermaston and Burghfield (both in Berkshire), are currently receiving a massive inward investment - estimated by the construction industry at around £12bn over the next 12 years. New weapons facilities and support systems are being built. AWE themselves have compared the size of their project to that of Heathrow's Terminal 5.

In response to this, groups such as Block the Builders, the Aldermaston Women's Peace Camp(aign) and Trident Ploughshares have been carrying out regular announced and unannounced actions at the bomb factories. See previous reports: here and here.

In Scotland, Faslane 365 (F365) has kept up the pressure on the Trident submarines' home port, with rolling blockades of the naval base since 1 October, resulting in more than 500 arrests. The Faslane and Aldermaston Peace Camps have been on holiday exchanges, with Aldermaston women heading north of the border for the first few days of F365, while Faslane campers paid Aldermaston a visit on 23 January for an unnanounced four-hour blockade of the base.

Meanwhile Nukewatch has continued to track warhead convoy movements around the country and recently released this video footage of the convoy en route from AWE Burghfield to RNAD Coulport in western Scotland (warhead depot in next loch round from Faslane).

Mainstream disarmament campaigns such as Greenpeace and CND have joined with campers and blockaders for ongoing actions at AWE Aldermaston. In the run-up to the publication of the White Paper, more than 400 people descended on AWE in a "weapons inspection" organised by Greenpeace and Block the Builders.