On Sunday 15th of June, as George W. Bush was making his way to Downing Street for his last state visit to the UK, thousands of people were gathering in Parliament Square following a call from the Stop the War Coalition.

Although the turn out to Sunday's protest was much smaller than in 2003 when Bush last visited the UK in the high of the Anti-War protest movement, by mid afternoon a crowd of around 2500 determined people were already making clear what they thought of the legacy of George Bush's wars in the Middle East and the US driven War on Terror [Demo video report] A powerful sound system had been set on the square from where several people, including Brian How, made speeches. Meanwhile the crowd kept demanding the arrest of George Bush for his "terrorist activities and war crimes" in countries such as Iraq and Afghanistan.

The protest had already been banned by the Metropolitan Police from marching through Whitehall, therefore crash barriers and police lines had been set at the southern end of Whitehall to prevent the demonstration from moving forward. At some point, the crowd approached the barriers and police lines to demand their right to demonstrate, but they were faced by a line of baton wielding police that started hitting those at the front. As a result a series of scuffles followed, resulting with some head injuries and bruises to some protesters, and the first wave of arrests.

Eventually, a large number of police with riot gear took positions to protect the entrance to Whitehall, whilst at the same time groups of TSG and FIT police forces started to carry a series of snatch arrests around the Parliament Square area [Video of arrests]. By the end of the evening 25 people had been arrested, some of which are now facing charges. 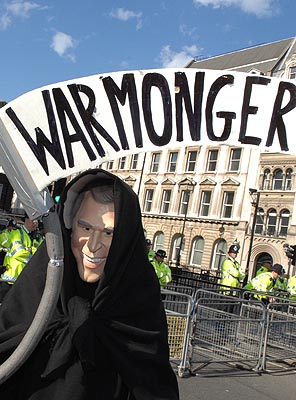 Although this may be the first time that the Metropolitan Police openly attacks a Stop the War Coalition demonstration in London in such a generalised way, the truth is that many autonomous groups, antiwar protesters and activists have encountered this sort of police behaviour in previous anti war mobilisations when they have been targeted for repression, without any show of solidarity from the STWC or even, at times, with an alleged tactical co-operation from Stop the War stewards.

STWC has now issued an statement protesting for the "violent policing of the demonstration" and stating that they will not be "co-operating with the police in regard to future protests until these concerns are addressed to our satisfaction". It is therefore not surprising that whilst some people find this an "interesting development", they also ask whether this may mean that the "STWC will shortly be issuing a press release apologising to the anti-authoritarian movement for stewards antagonising them, impeding their movement, labelling them the reason the anti-war movement has died, etc?"

Despite the best efforts of the Stop the War coalition to serve up a generic McMarch against the ‘World’s No.1 Terrorist’, an up-fer-it crowd of some 2,000 people defied the wishes of the police and STW stewards and tried their damnedest to deliver their message in person to Whitehall.

The rally started around 5pm. George Gallotwat, Tony ‘Against The War But For The Warmakers’ Benn and Lindsey ‘Vanguard’ German all made their appearance, alongside People’s (or is it Hello’s) favourite Bianca Jagger, all on hand to provide a soporific voice-over to the demo.

The march had initially been banned by police, who threatened to use powers originally brought in to quell the Chartists in 1839.

The demo proper started around 6.30. Led by a samba band, the crowd went from Parliament Square towards Whitehall. Once the crowd met the lines of police, the demo broke out of its traditional conformity and a bit of genuine argy-bargy ensued. Either hoping for a bit of street cred or caught out by the turn of events, onlookers spotted Gallotwat and Bianca in the fray.

Once up against the pig pens the crowd started pushing, busting down the fences in one place, gee'd on by Parliament Square's badge-headed resident MC Brian Haw. Afraid of losing control of the situation, the police hit back, pushing and shoving while hitting people with their batons. For good measure they also broke some hippy drums.

The protesters used the Stop the War/ SWP banners for the only thing they’re any good for - bashing the cops. Meanwhile, the Socialist Worker stalwarts bravely hung around the back and sold papers.

As it all kicked off the STW stewards showed their true allegiances as they started ordering the crowd to obey the police and leave quietly. At one point they had their backs to the police and were physically blocking the demonstrators from getting any closer to Bush and his minions. This went on for about 1 ½ hours as people tried to get closer to Whitehall. They didn’t succeed, but a valiant effort by all concerned.
There were further clashes when people tried to get around the back of St James Park, only to be met by police in riot gear, who soon put a stop to their fun.

There was nobody masked up at the demo, even those in the front lines weren’t disguised in any way. Compounding this naivety, after the demo people hung around Parliament Square, only to be picked off by police snatch squads. Next time perhaps bring a scarf..?

The full issue 636 of schNEWS can be found here:

sorry should have put it up, took ages looking for this particular one

this one gives a good overview of the protest

The way that you word your article leads one to believe that the Met happened to launch a completely unwarranted attack on you poor souls for absolutely no reason. If some (not all, I don't expect you're all as bad) of you believe that the police are bully boys and girls then you are deluded. They are not there because they don't like you and your beliefs, they are there because they are ordered to be, if you believe that all police are conservative, racist, facist and everything else-ist under the sun then you need to be brought back from the apathic world that you live in back to reality. I hope that you allow this comment to remain, because only publishing things that suit you would be highly hypocritical and contradict your beliefs in freedom of speech etc.

The title is a piss take on the way that demos are usually reported:

As for your lack of understanding of the actual institutional role of cops - thats your problem.

Agent Provocateur on this demo

An article about agents provocateurs on this demo from, would you believe it? the Daily Mail:

there are some good video links on youtube which are worthwhile watching, theres one where after the protest the riot police randomly grab a guy by the neck and just drag him away for no apparant reason and by such violence, absolutley disgusting to see they can get away with this

Anyone know which video this is?

Tony ‘Against The War But For The Warmakers’ Benn

Why on earth anarchists hope to prove to everyone that 'being an anarchist' is better than being anyone else is beyond me, who've they got as their intellectual forefathers, oh right yeah a raving anti-semite and an upper class twit called Peter Kropotkin

Fair enough, I wasn't on the demo and it would not surpise me if there were a lot of irritating people stewarding or selling SW papers but quite what this slur on Anthony Benn is about is beyond me. It strikes me that the character that wrote this article for Schnews is probably the sort of person who went on the recent, pathetic, 'ban the London Mayor cos we hate taxes' anti-voting demonstration, or maybe the sort of person that is willing to give the editorial board of Green Anarchist magazine the benefit of the doubt cos mental illness is like a state social construct maan

A good, overall well written account of the matter. JB sounds very much like a police person herself/himself. Bullying and violence excercized on demonstrators is common, I have seen it myself and experienced it myself. I knew the late Pauline Campbell well and the behaviour of the police throwing her to the ground - I saw it - was shocking. The kind of tactics described here have been used before and, the truth of the matter is (not that cops show much interest in truth at anytime) there is no LEGITIMATE avenue for complaints - the IPCC?- come off it former persons involvd have admitted widespread cover ups and allowing police to investigate police - NO officer JB police are bullying cowards hiding behind uniforms - I wonder if you come from Brighton but where ever I cannot agree with or support what you say