Climate Camp: How The Police Radicalized An Entire Generation

Mass harrassment, terror tactics, theft, lies and propaganda, excessive force: the relentless campaign of intimidation by police at this years Climate Camp that started with raiding the camp and confiscating essential equipment, has also now included the premeditated political use of blanket stop and search, night-time terrorising of the climate camp site, confiscating pushbikes, blockading food supplies, and harrassment of media and legal observers.

Late Tuesday night/very early Wednesday morning police attempted to terrorise the camp with a low-flying helicopter and by storming the gates with sirens blaring and riot cops shouting. The same night police cut locks and took away bikes after telling people to leave their bikes in the car park. From the beginning the police used excessive force against climate campers (photos) including women, children and legal observers. See newswire post on police bullying. 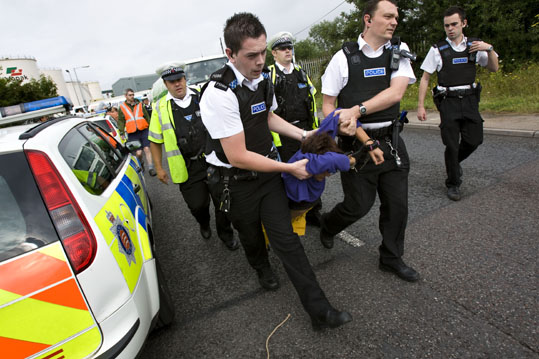 On-site media also suffered intimidation from the noisy low-flying police helicopter, while reporters and photographers were held outside, some for hours.

On Thursday vans delivering food were stopped and forced to unload a mile from the site.

Climate campers soon came together to defend the site against the police incursions and resist the blanket stop and search(pics & audio), with many commenting that the repeated heavy attempts to enter the camp 'are radicalising a new generation of activists'. Photos of Wednesdays mass 'breakout' here.

Police were given extended stop and search powers on Thursday, they can now stop and search anyone without needing to have reasonable grounds to do so. The pre-meditated political use of blanket stop and search is well known to be unlawful under the Police and Criminal Evidence (PACE) Act, Section A. Such searches cannot be based on 'generalisations or stereotypical images'. The Camp For Climate Action Legal Support team wrote to the police about the legality of their exercise of powers of seizure.

As if the harrassment and intimidatory tactics weren't enough, police resorted to disinformation via the mainstream media, claiming an outbreak of dysentry in the camp and the unearthing of a 'secret weapons stash'.