As the Lebanese people are reeling from Israel's illegal bombing campaign, and the people of the West Bank and Gaza are suffering a continuous onslaught by the Israeli military, the Palestine Solidarity Campaign (PSC) and the Boycott Israeli Goods Campaign (BIG) activists joined a nationwide Boycott Day of Action against Israel on 7 October, 2006. A similar day of action was organised on 24 June, 2006, and a further day of action was held by the Irish Palestine Solidarity Campaign. 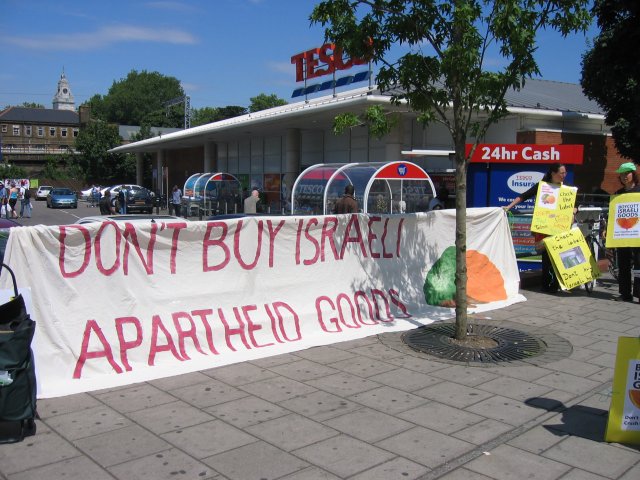 Over the summer, the movement for a boycott of apartheid Israel has been gathering momentum. Concerned individuals have taken action to show their anger over Israeli actions in Lebanon and the occupied territories. Many activists have targeted the supply of arms to Israel by invading bases being used to transport weapons components to Israel or taking action against arms companies dealing with Israel. In Derry, during the bombing of Lebanon, activists broke into US arms manufacturer Raytheon's main office burning thousands of documents, while in Brighton protesters have caused major disruption to EDO MBM, supplier of electrical weapons components to Israel, throughout the summer.

Since the bombing of Lebanon began in June this year, Palestinians have renewed calls for a cultural boycott of apartheid Israel. Several international film festivals, including those at Lussass and Edinburgh have handed back Israeli embassy sponsorship. On 19 September, the Irish group, Academics for Justice, followed in the footsteps of British academic trade unions NAFTHE and the AUT and called for an academic boycott of apartheid Israel.

In addition to its brutal occupation and theft of Palestinian land, the Israeli state also operates an entrenched system of racial discrimination against its own Palestinian civilians, which is, among the reasons, why many South African activists label it an apartheid state.

Israel occupied the West Bank, Gaza Strip and Golan Heights in 1967 in contravention international law. Since then, Israel has moved over 380,000 settlers into these occupied territories in contravention of the Fourth Geneva Convention (article 49), the Hague Regulations and United Nations Security Council Resolutions.

Israel continues to build an illegal apartheid wall inside the West Bank despite the Advisory Ruling of the International Court of Justice in 2005 that the wall is illegal. Fifty five illegal Israeli settlements will be on the Israeli side of the wall separated from the West Bank.

Since 2000, Israel has demolished 628 Palestinian houses, home to 3,983 people, in acts of collective punishment. These demolitions constitute a war crime. 3,808 Palestinians have been killed as a direct result of Israeli military actions and 29,456 injured during the current upraising, which began in September 2000 (above statistics confirmed by the Israeli Information Centre Btselem). 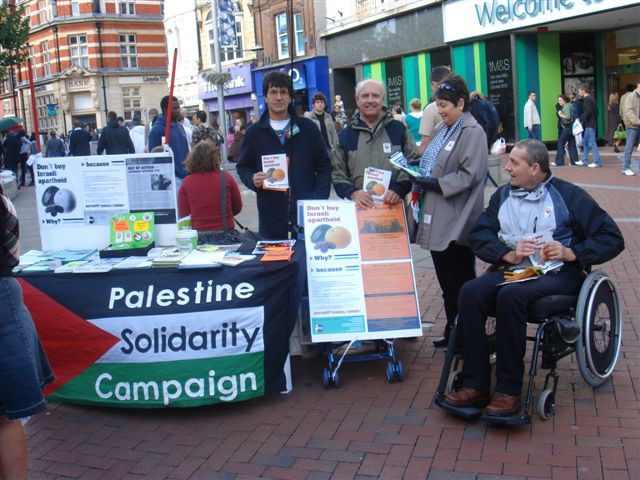 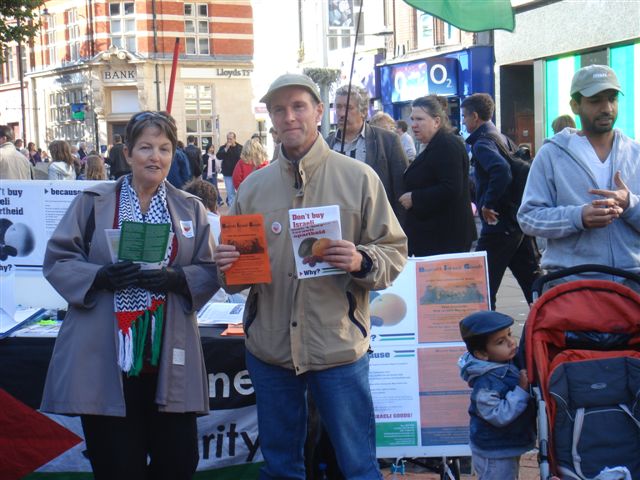 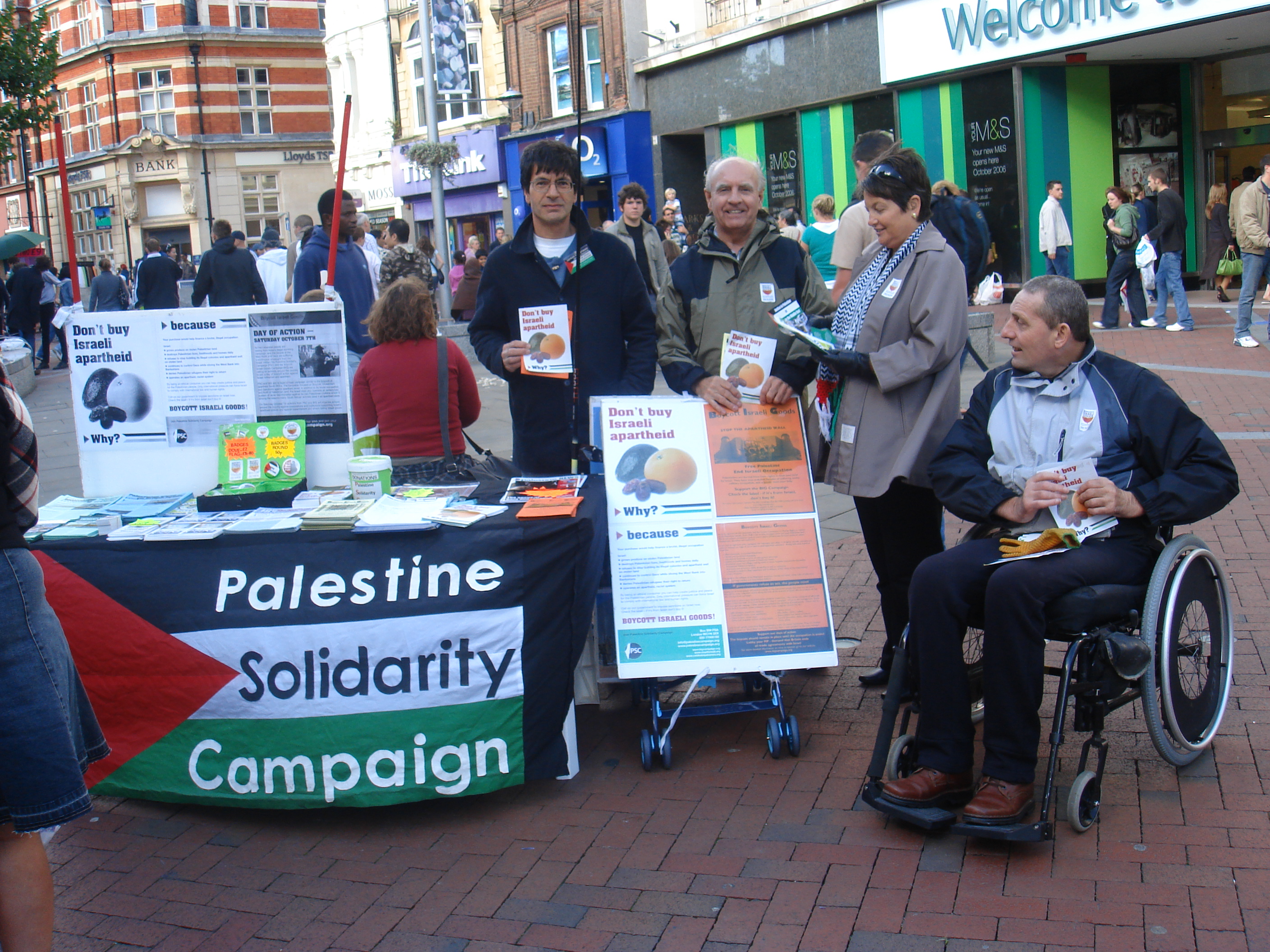 Picture of activists in Reading as part of PSC/BIHG's UK-wide day of action. 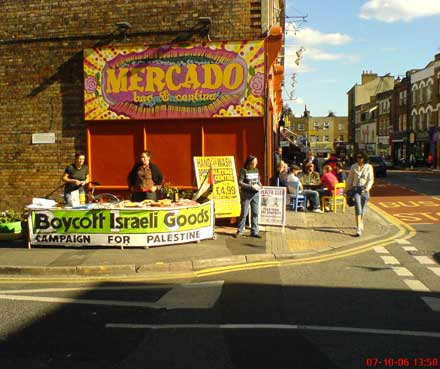 On October 7th Oxford Palestine Solidarity Campaign joined campaigners throughout the country to draw the attention of the retail trade and shoppers to the abuses suffered by the Palestinians on a daily basis as a result of the Israeli occupation. The call from them was to boycott all Israeli goods. Oxford PSC organised a picket and leafleting of the three supermarkets in Summertown, all of whom currently stock Israeli goods.
From 11-1pm we handed out several hundred of the Boycott leaflets. We also had display boards and individual posters to hold that illustrated the reasons for calling for a boycott of Israel. A particularly poignant photo shows an elderly Palestinian woman, arms around her devastated olive tree. Many passers-by came to the stall for more information, and most people who were given leaflets responded positively, some waiting to hear more information, and quite a number telling us that they regularly boycott goods from Israel. Several had been Anti-Apartheid campaigners, and talked about the successful – but lengthy- boycott campaign against South Africa. “It was difficult but worth it in the end. Good luck to you”
.Of course as always there were a few people who didn’t respond positively, and unfortunately some comments about veils and the colour of people’s skin BUT we all felt that it was a very successful morning, and enabled us to communicate with a large section of the public that we may not otherwise reach.