Yet again a mink farm and lab breeder are raided, McDonalds Novartis, Kleider Bauer and Escada (to name a few) are attacked whilst other fur shops close down. Also a bad year for hunting in Germany and better lives for 2 chickens and a rabbit. 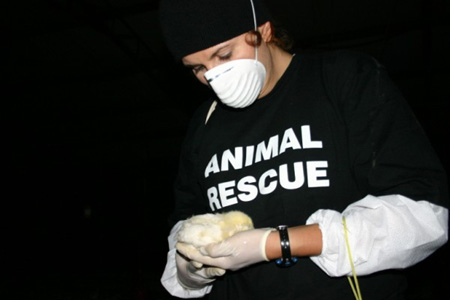 A BETTER LIFE FOR RABBIT (USA)

"December 26th (Kirov, Russia): Spray-painted slogans on walls of the 'Ice
city' against squirrels in captivity

Recent actions in Cataluña, reported by activists in Spain:

"9th of November: red paint was thrown on Novartis headquarters. Also graffities were painted in the surrounding area of Novartis. Such as 'Novartis stop dealing with HLS'.

28th of November: Escada fur shop had it's lock glued and graffities where made (Barcelona).

Another fur shop was attacked in Gerona (Cataluña) in November, as the newspaper 20minutos reported."

Germany - A BAD YEAR FOR HUNTERS

"On 24.11.2007 we went back to the forests of Premnitz to sabotage hunting. Three hunting towers and a feed station-- its purpose to attract non-human animals, who are then shot from above by cowardly hunters-- were destroyed and two towers were hit with an incendiary attack, but unfortunately only one completely burned.

To all hunters in Premnitz and surrounding areas . . . . We will return until hunting ends!"

"On December 28 a mink farm located in San Cesareo (Rome) was targeted by animal rights activists who claimed the liberation of 2000 mink in a letter sent to the press. The activists said they cut hundreds of meters of fencing in order to let the animals escape. This farm has been subject to at least two liberations in the past."

"Two fur shops in Stockholm, Sweden, have closed down recently as a result of a long and intensive campaign of direct actions carried out against them."

http://www.tierbefreier.de/alf), the ALF dumped butyric acid inside a Kleider Bauer store in Vienna on January 7 or 8. During the past month, there have been two butyric acid attacks against Kleider Bauer and related stores, and two shops got their windows etched. The activists promise to continue the actions until Kleider Bauer goes fur-free.

http://www.alv.org.au/
Click here to view photos from the rescue:

"November 30 - Stockholm; Letter to a furrier: Agneta! You seem to live a comfortable life together with Peter. You are doing well financially. Live in a fancy part of town. Have your own company. But with power comes responsibility Agneta! When one has it as good as you have there is no reason for you to live like a parasite on the torture and death of animals. You have a choice. One that the animals never got. Your choices have consequences. On friday 30 november we made a home visit and painted your car and sliced its tires. At the same time other activists covered your fur shop in red paint across the town. We are watching your choices Agneta. Remember that. You are the cause and we are the effect. We will never tolerate animal cruelty. Never ever! Against all oppression! - Female separatist cell of DBF

December 18 - Malmö; Windows on a BMW belonging to the accountant of Havgårds Päls (fur shop) was etched and red paint was poured all over the car. - DBF

December 18 - Stockholm; Tar was poured over the entrance of the fur shop on Brahegatan. The windows were still etched and store front painted since our last visit. - DBF

December 27 - Stockholm; Furrier Åke Anderson tries to fool his customers that he sells fur. We modified the shop so it will be more clear what he sells: Murder, Suffering and Death. - DBF

December 28 - Stockholm; Furrier Agneta Strömgren finally washed her shop's store front so we had to paint it all over again with red paint. - DBF

December 28 - Malmö; A & C Revisionsbyrå (accounting agency) was visited by militant animal right activists. The reason for the attack was that the company is doing the fur shop Havgårds papers and after several warnings and actions they keep trying to make money on animal suffering. Havgårds has already lost two accountants due to the DBF's actions and have been close to shutting down as a company always need an accountant to go through their finances.

A&C Revisionsbyrå and Mikael Cressy is keeping Havgårds Päls going and they will be hit even harder if they dont sever all ties immediately. Tonight we glued all their locks and one big glass jar of tar and one with paint was thrown through their windows.

This was just a taste of what awaits you in the coming year.

All who do business with Havgårds Päls and everyone who profits on animal suffering will be targets for our actions.

Note: The accountant has since stopped working on behalf of the fur shop.

USA - A BETTER LIFE FOR RABBIT

"This rabbit was showing signs of stereotypic behavior from boredom, being kept in a very small cage. Now living on the ground in sunshine and a natural environment.
S.C., USA"

"On a midweek night in London, cheap entertainment is hard to find. However, on this occasion, a bit of invention lead to a thoroughly hilarious and entertaining show. In Shaftsbury Avenue the McShit has railings that are very close to the metal door handles, and we thought it would be highly amusing if they were chained together just before the shop was about to shut, thus preventing the door being closed.

Well attaching and locking the chain was child's play... and then the fun started. Watching the McManager and McAssistant McManager trying to tug the metal chain with complete futility was brilliant, and then a McWorker was made to stand at the door advising members of the public that the restaurant was, dispite the fact the door was chained open, in fact closed. While sipping pints of vegan lager from a nearby pub, we watched and laughed while the resident McIdiots wondered how to solve this most unusual problem. How many restaurants I wonder have ever had the problem of having their restaurant doors chained OPEN!?!? It was better than any Hollywood movie, and I highly recommend this activity to everyone who has a bit of chain, a lock and a desire for a good old laugh.

We were surprised to see the McStaff appear with bolt cutters after about 20 minutes - I can't believe they actually had them in the shop! They tried to use the bolt cutters like an axe for several minutes, swinging at the chain from above their heads. Once they had got to grips with this very complicated device, they were able to eventually cut through the metal chains which enabled them to close their doors. Lessons have been learnt and the fun will be even greater next time. Watch this space... thicker chain will make things quite a lot more difficult!! hehehe
Much love to all the activists around the world fighting overground and underground for total animal liberation. Keep fighting! We will win!"