At 1pm on Monday October 9th, up to one hundred and fifty angry and concerned people converged on the Palace of Westminster, to sack parliament. The plan was to surround parliament and cause parliamentary activities to cease. MPs, Lords and civil servants would be prevented from re-opening Parliament.

As soon as protesters started to arrive, police quickly moved in stop and search everyone that was considered 'suspicious'. Many people were turned away from reaching Parliament Square, others were singled out by police units and prevented from joining the protests. See 2pm update when protesters were surrounded by police. An NUJ photogapher was hospitalised by police [photo + witness appeal] after being violently thrown into a kerb. See also 3pm update and a report.

Eventually the people trapped in the police ring were let out and escorted from Parlianment Square after having been searched, photographed and identified [treatment of press report]. All were told that they would be reported for summons for the offence of taking part in an unlawful demonstration.

There are reports of up to 40 people having been arrested. The court hearings for those arrested and summoned will start on Tuesday 17th Oct at 10am in West London Court [details] Anyone who can get down there to show solidarity and support to those involved will be greatly appreciated. [screening of footage (tuesday 10th)] 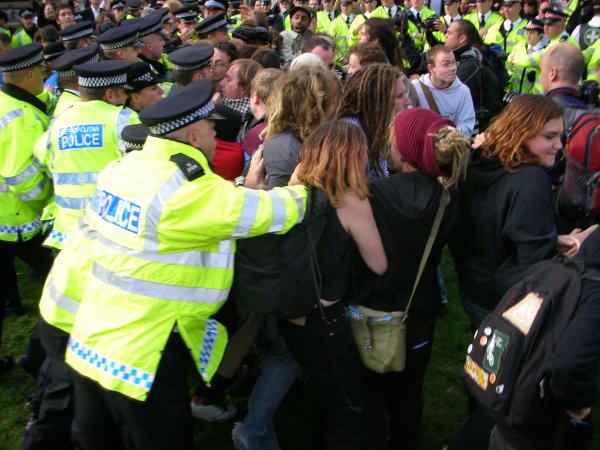 Various groups and individuals had called out for events to happen on the day. The first of these was a Critical Mass meeting under Waterloo Bridge at midday. Later, an anti-authoritarian and anarchist block meeting in Parliament Square, which would be near to the Rehabilitation block and Party@Parliament both of which were prapared to offer support and advice to sacked parliamentarians. The right-wing media have also helpfully publicised the event, and helped to show just what the police think of protest in this day and age.

A request to have the British government arrested for war crimes was sent to national newspapers.

According to participants, "The rank incompetency of the cabinet, the government and parliament in their handling of both foreign and domestic policy cannot be ignored any longer. Take part! Stop them continuing their wars; we have only one option left: sack parliament."

I was in parliament square when this was all happening, it was farcical, the police hugely outnumbered the protestors. As for arrests, around forty people were arrested, and held in police custody, including myself. I was bailed at one am this morning after being charged with offences under the SOCPA act. Monday was another example of the draconian state our government is creating. And I feel that the treatment of the media reflects this.

Solidarity for the hearing.

This is the imformation I have for at least some of those arrested and/or summoned.

Anyone who can get down there please show support and solidarity. One of my friends who was arrested, brutally might I add, has also just heard he will be tried as an organiser which is utter bollocks.

I to was one of the people charged under the SOCPA Act. 9 hours in't cell with no food or water. They confiscated by banner. I made that in my commune with some others the night before. My banner is now being used as evidence 'Government is Tyranny' (Big A). The Snatch and grab styles made by the police reminded me of the SPG Tactics in thatchers time. Police arnt allowed to profile apparently but there will gladly label ppl 'punks' hippies' ect. The SOCPA Act s yet another example of the repression of free speech, and an example of this country's and the west's downward spiral. I show no remourse for what happened and stand by my words on that banner!

The price of dissent 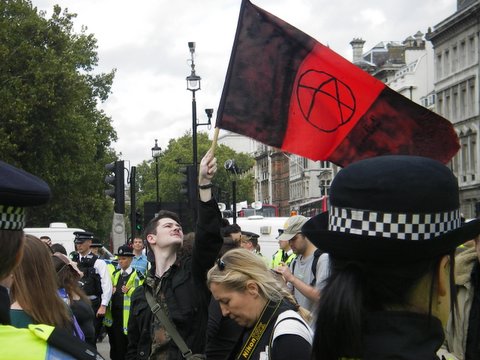 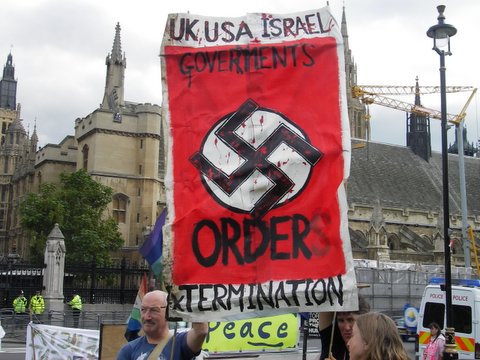 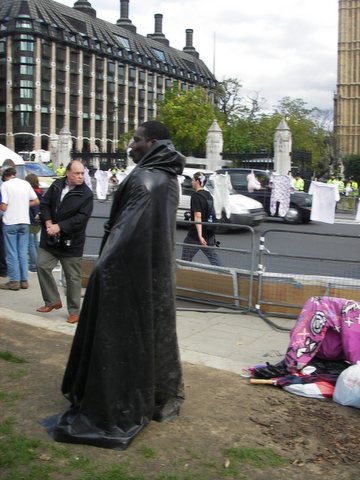 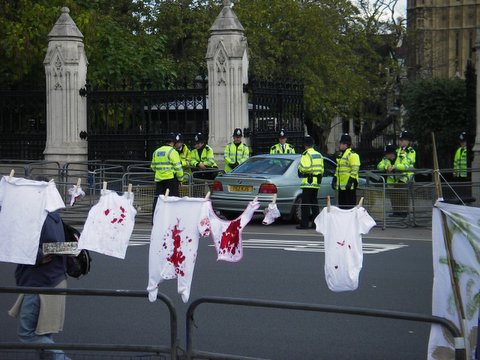 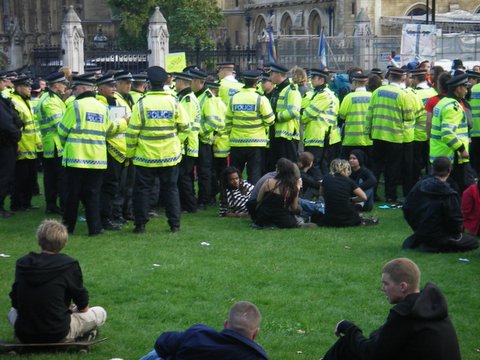 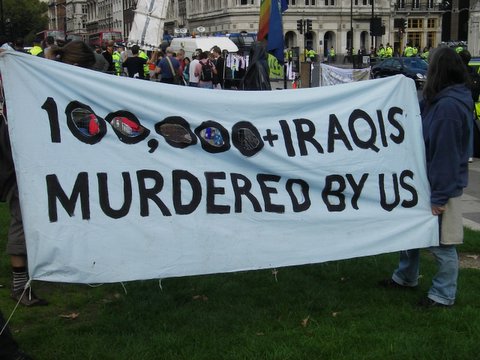 A state of emergency acknowledged. Brian’s muted bell tolls to me heavier and with more urgency than ether the passing traffic, spycopters or Ben. The planet is in crisis. The final solution is ether complicity in their genocide or rebellion and the outright sacking of their Parliament! Seditious thinkers could and would not be allowed to take back the mother of all Parliaments.

The intelligence brief was prepared to cover all eventualities. Overwhelming numbers of semi-armoured robots were programmed for deployment to the streets. Countless others switched to standby mode - batons, sprays, bullets and eezee-wipe jackets ready to obey without question much like how the SS indulged Hitler.

The Flyer said 1 o’clock. We arrived early only to be detained and searched on suspicion of being indigenous in an area vulnerable to tourism. Once we were processed and autoissued with pink slip and due notification stating our being there was unauthorised. unpreturbed we granted ourselves the right to freedom of movement in spite of the solemn warning that harbouring any thoughts of rebellion we would experience in full, the might of the glourious instruments of this democratic state.

The big clock bonged once. A horn was blasted. People and Robots waited for what was to be. Sinister Infobots continued their recording and scanning to prove their worth if not now but at a later date in the fight against humanity.

At about 1:15 a small group of 7-10 gutsy anarcho kids ran across the green towards Westminster, one being if only for a short while defiantly de-arrested from robotic reach.

This odd assortment of protesters and the curious were segregated now as participant and spectator using the cursory criteria of being in the north west corner as the lines of control went in. A smiling curteous android gestered an invitation to join the inner circle, much like a helpfull assistant pointing the way to the showers in Belsen. Rejecting the offer i retired to the deceptive safety of Brian's state erected pen.

To see a puffing fat autobot over a man with camera on the ground, press card being the only evidence i could see of his crime. The cordon then was reinforced and squeezed nicely for the best possible results, snatch squads operating with the pleasure of impunity. “Fuck the police” the chant went out as they performed their perfected violence on the people for peace. “This is not democracy this is hypocrisy” was the cry as nearby a black clad ‘medic’ administered aid almost as skilfully as he had administered blows to another.

Slowly the remnants of the traped crowd were 'delt with' while a group of about 12 unused rubber clad horse riders passed in a lap of fitting honnor.

More information about the court hearings for those arrested/summoned:

Anyone who can get down there to show solidarity and support to those involved will be greatly appreciated. Thanks.