The site for this year's Camp for Climate Action was taken four days ahead of the official start on Wednesday 30th July, just a few fields from the Kingsnorth Coal Power Plant. In a flurry of activity around 100 campaigners began setting up the camp at 3pm erecting tripods to prevent police from moving them and a banner which reads 'No New Coal' See Report and Pics | Gallery 1, 2 | Video: Camp is Open

Thurs 31st July: In a much criticised move, Police raided the Climate Camp on Thursday evening, under the guise of searching for items which could be used for criminal damage. Although police claimed to be searching for materials that could be used on the 9th August day of action, their search focused on items such as guy-ropes for safely securing marquees, radios used in medical emergencies, and building materials essential for the construction of compost toilets as well as water piping. The seizures went as far as the confiscation of such ridiculous items as a bicycle repair kit, three board games and a pack of children's crayons. Other items taken included kitchen equipment and computer cables. Other equipment including construction wood was saved from confiscation by campaigners taking direct action. By the end of the day there had been 6 arrests, but the setting up continues and campers even found time to play a game of football with local residents. See Photos and Report | Camp Press Release | Report 2, 3 | Footie report

Friday 1st August: Construction of the camp continues apace. The local council has instructed the water board to install a water supply at the entrance of the camp. Today was also the first day for the media to come on site and be shown around. The temporary Field IMC at the Camp for Climate Action, is on-line and up and running. Meanwhile this morning 20 activists successfully blockaded the only access gate to Cargill's European regional head office in Cobham, Surrey. 8 activists locked on to the gates closing the site down completely. Agrobusiness giant Cargill are being targeted by the protesters for their role in rainforest destruction and land-grabbing as well as for profiteering from the food crisis. See Report | Pics | Feature

Saturday 2nd August: Police continue to confiscate essential camp infrastructures from people arriving, while the main marquee cannot be set up as Police still have key parts which they took on Thursday. After negatiations some of the items seized today were returned later in the evening, including materials for disabled access and toilets. The Police Forward Intelligence Team made a foray onto the field today but were ejected from the field by campers - see report. Meanwhile campaigners in the High Peaks area staged a demonstration to call for the re-opening of the Woodhead Tunnel and the Manchester to Sheffield rail line - see report. People arriving for the camp are being searched thoroughly by Police, but numbers are swelling. 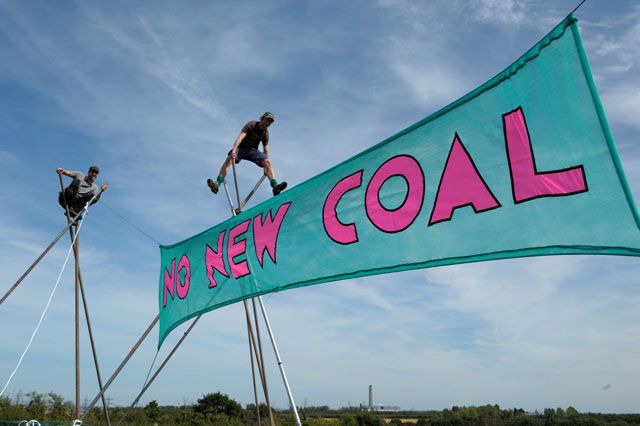 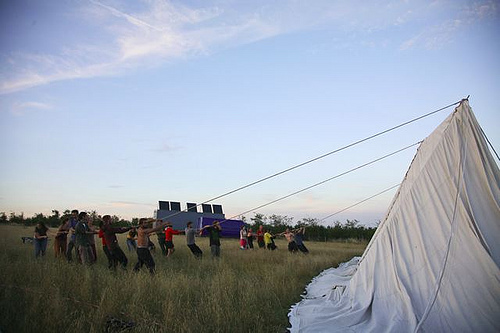 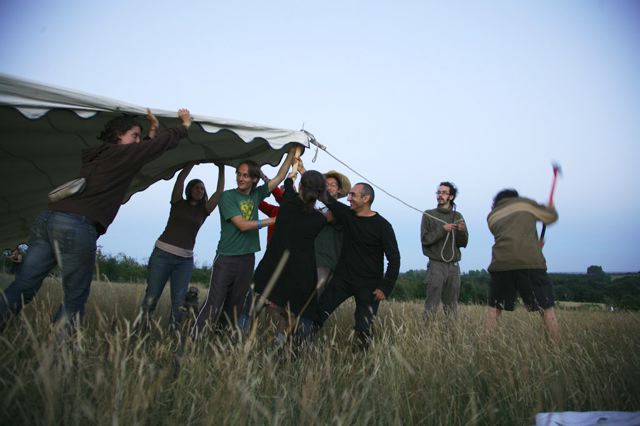 of site taking / set up

Things are slowly going up but still lots of stuff missing and the police say they wont return stuff till next Thursday. The big marquee currently can't go up as the police have key pieces.

17:30
People went to buy materials for the camp's disabled toilet as much of the building material had been taken previously by police. When they returned to the camp, the police confiscated it all; plywood, timber, bolts etc. The track for the wheel chair access was also taken. After negatiations some of the items were returned later in the evening.

16:10
Slow progress but there is progress. Water reaching many more parts of site. More structures going up. Been difficult due to cops taking stuff but we're getting there. Weather good. Ground dry. (note: was cold last night, reasonable bedding a good idea.) See comment.

12:37
The Forward Intelligence Team made a foray onto the field today but were ejected from the field by campers. Police still feel confident to wander about the site in pairs - followed and escorted, natch - but the arrival of the FIT with cameras proved too much. Accordingly they were surrounded and ejected from the field today by the camp. Numbers are swelling - the clmate camp info line is very busy with last minute requests for directions. See article.

12:00
Campaigners in the High Peak stage a demonstration to call for the re-opening of the Woodhead Tunnel and the Manchester to Sheffield rail line. The demo co-incides with the Climate Camp at Kingsnorth, Kent. The tunnel is under threat due to National Grid's plans to run cables through it, transferring power generated in the coal fields of Yorkshire to the industrial centres of the North West. See article for more info.

The temporary Field IMC at the Camp for Climate Action, is on-line and up and running with terminals for publishing via a bidirectional satellite link. "We shall be running minimal services from tomorrow onwards. We'll be fully running by Sunday/Monday of the camp". See article.

16:30
The atmosphere at the camp is calm. People are working hard on the setting up. Erecting marquees and building toilets. The local council has instructed the water board to install a water supply at the entrance of the camp. Today was also the first day for the media to come on site and be shown around. Some police continue to walk around, escorted by people from the camp. At the moment people are randomly searched. Vehicles are given a more thorough check over.

7:50
20 participants of this year's Camp for Climate Action and members of Action Against Agrofuels successfully blockaded the only access gate to Cargill's European regional head office in Cobham, Surrey. 8 activists locked on to the gates closing the site down completely. Agrobusiness giant Cargill are being targeted by the protesters for their role in rainforest destruction and land-grabbing as well as for profiteering from the food crisis. For photos and background see this feature article.
31-07-2008
23:34

It is reported that there have been several more arrests this evening (approx 6 in total) and police are still on site. Many things have been confiscated and there is currently an on site police caravan/office. No reports of new people being stopped from entering site.

19:10
Police numbers on site are now substantially reduced but they have installed a mobile police station at the entrance to the camp and there is talk of a permanent patrol. Campers currently negotiating the return of the property stolen by police, much of which is essential to setting up the camp infrastructure [Press Release]

18.15
Currently the police are attempting seize a pile of construction wood but campers are sitting on the pile to protect the essential construction material which is destined to be made into compost toilets etc. Previously police tried to take rolls of water pipe but were physically prevented from doing so by campers. Confiscated items now include: rope, tools, a ladder, three boardgames, boiler suits, wet suits and flares. Police have emptied entire vans. The searches have finished but police remain on site or close by.

16.40
Well over 100 police officers have entered the site with vehicles and a police helicopter is hovering overhead [report | more] Police were issued with a warrant for the searching and seizing of articles for use in criminal damage. Confiscated items have included: planks of wood, carpet and a war-on-terror board game. Every tent is being searched. People are up in the tripods. Some officers are reported acting aggressively towards people trying to resist the search. So far two people have been arrested, one for stopping police from going into their tent (obstruction). Forward Intelligence Teams (FIT) are walking around the site photographing and filming people.

The site for the Climate Camp has been successfully occupied. 100 people entered and secured the uncultivated field at Deansgate Ridge, only 1 km from Kingsnorth Power Station. They erected and climbed tripods to prevent police from moving them and have erected a marquee alongside a banner which reads 'No New Coal'. See article.

12.00
During the fourth day of the Climate Caravan a large group of displaced penguins, a homeless polar bear, and several of human climate refugees crossed London Bridge to enter the City of London. The group visited a variety of oil, gas and finance companies that they have identified as fuelling the runaway climate chaos that is destroying their homes. See report with pictures and press release