12.30am The blockade of the World Cargo depot ends, protesters have been cut out and have called in from police stations.
10.45pm The seven-strong support team from the World Cargo depot blockade have been made to leave and are on their way back to site. Those locked on have been arrested but it's not clear at this time if they have yet been removed.
9.10pm The BA World Cargo terminal shed is being blockaded by 8 people in lock on tubes forming a circle [press release|photos]. They have seven people present in support. Meanwhile Bicycology have delivered food to the 250+ people sheltering under tarps outside BAA. There is music and a party atmosphere despite the rain [later reports|audio].
8.15pm Bicycology has just left the camp with trailers full of food, cake and treats for those planning on camping at BAA tonight. More tham 200 people are currently at the BAA offices planning to stay overnight.
8.00pm The police cordons around both groups of protesters at BAA HQ have now dispersed. Some people are now returning to camp whilst others are trying to join the larger block to camp overnight.
7.30pm About one hour ago people dropped a banner reading 'Plane Suicide' on Colnbrook Bypass motorway bridge over the M25. The banner overlooks the traffic going northbound, some of which will exit off towards the aiport.
7.20pm The smaller group penned in at BAA is negotiating to be moved with the bigger group on the other side of the building. People are preparing to stay for the night at BAA - cooking equipment is being sorted and a cooking rota is being organised.
6.20pm Kids blockade arrives at BAA with bicycle soundsystem and placed in kettle. Meanwhile some some people are returning in dribs and drabs to camp. People are free to come and go as usual via the Sipson Lane gate. All others are blocked. Legal team are confirming 5 arrests so far and more reports of injuries are coming in.
5.00pm Riot police are blocking the footpath exit, southeast of the camp. They are not letting people out but they are letting people in. A line of people has been formed in front of them with their hands up on the air.
4.00pm A man superglued himself to a security vehicle at the Heathrow business academy. He was unstuck and arrested. Meanwhile the majority of the kids block are heading towards the BAA offices along the A4 with others returning to the camp. The atmosphere is good, the march looks really colorful and people are singing.
3.30pm Around 250 people are being confined by police behind the BAA offices. The building itself is now protected by a ring of police. Small groups of people keep coming to the area of BAA building. In the BAA carpark another small group are "praying" with the BAA monks! Another 200-300 people from the Kids block are headed towards the BAA offices.
3.15pm Around 100 protesters have reached BAA and are holding a banner reading 'Social Change Not Lifestyle Change'. Lots of mainstream media are present.
3.00pm 200-300 people left the camp from the south side and fanned out into smaller groups. TSG, police in riot gear and mounted police are there trying to kettle the crowds in the fields. One protester has reportedly been injured by a police horse. Police have broken down a fence to enable mounted police to enter and are being aggressive. 100 people were penned in but have since returned to the camp, others made it further towards BAA [full pic report].
1.00pm 3 teenage girls are on the roof of the Heathrow Business Academy, very close to BAA headquaters. They have unrolled a banner that reads Make Planes History
12.00 noon At least three large groups of several hundred people each have marched out of the camp from both exits towards the various targets of their actions. Children, parents and supporters are on one family-friendly march, one group is marking out the proposed third runway, while another has left from the south end of the camp and fanned out into smaller groups to foil police efforts to keep them in.

For up-to-the-minute climate camp reports and breaking news, check the Indymedia UK News Ticker. You can also get it as SMS alerts or listen to it by phoning the Blasted Campers info line on 0207 043 3783.

Daily round-ups are on the UK Indymedia Climate Camp page. 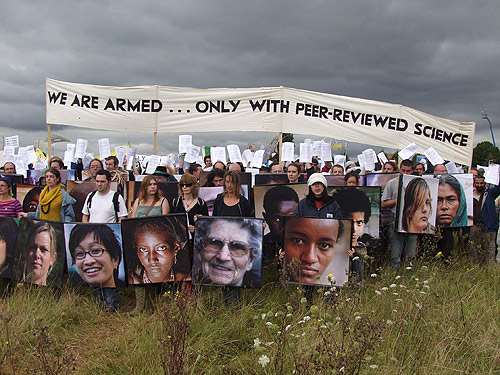 New chapter has opened up for the worlds social movements: camp(S) for climate a

Thanks a million to one and all who did whatever they did.... inspirational

"The people who set up the Heathrow climate camp are neat, articulate and frighteningly well-organised. What is the world coming to?" wondered George Monbiot in the Guardian.

It seems as if a new chapter has opened up for the worlds social movements, although this was the second climate camp in Britain (Drax Power Station being targeted in 2006) there are already proposals to have climate camps at the same time next year in Britain, Germany and Australia all with the same idea of widening the discussion, creating an open space for more to learn and participate, and from that to take "direct action" locally to struggle together globally. This comes after much discussion about "summit hopping" (thousands arriving to attempt to block the yearly G8 / meetings + IMF / WTO / world economic forum...) and while many do feel it is vitally important to keep making the point to the world leaders that "our world is not for sale" at these gatherings many have felt that we (those in the movement of movements around this finite planet) need to take this story for the planets survival and for global justice to the next stage.

With the recent camp for climate action near Sipson village and Heathrow airport in London it seems the message has really gone out around the world that "climate change" is being addressed and challenged by non-violent "direct action" by all those who are willing to find out about the issues and stand up to make a change. There were grannies, babys, anarchists, teachers, clowns, musicians, gardeners, artists, architects, unemployed... in fact there seemed to be allsorts there in a few days of intense discussion, skill sharing, ideas bouncing, planning and finally action. People said the story went out on media in every continent bar Antartica. Although perhaps initially prompted by fears of airport disruption and other negative issues about protest, it seems, judging by the British media, that a fair picture has gone out to the world that this is a CRITICAL issue and thankfully there is something that people can do.

The final day of action was peaceful from our side and only the police used excessive force and sometimes totally unprovoked violence against people of varying ages who suffered blows bangs and kicks from them, 2 people who were in our barrio / neighbourhood were injured: 1 twisted ankle and smashed nose after the side of police shield was smashed upward into the base of his nose, another girl was hit a few times by a baton and suffered concussion. Despite the attempt to hold us back we made it to our destination BAA, held it up to make our point and left as a group in our own time. Thankfully most British media reported this state violence and our committed and sometimes difficult use of non-violence. In many peoples eyes we succeeded in doing what we set out to do: job done.

As well as aciton and organising what we were doing, as well as action support workshops, the camp was a model of sustainable living and participitive democracy in action. Most people unfamiliar with this hand wiggling form of reaching agreement were very impressed with its results. There were also many themed workshops and some excellent evening talks with speakers about the current situation and what has to be done to change things.

A serious amount of great organisation went into pulling this event off and I for one believe it is only the start of things to come.

So perhaps there might even be a local irish "camp for climate action" next year to coincide with the others as they happen around this lovely little planet, coincidentally enough the first irish green gathering happened the same weekend as the London climate camp.

Thanks a million to one and all who did whatever they did.... inspirational

"Bottle them in" - flim of start of the kettle at BAA
Not great quality, but shows the police 'kettling' about 200 demonstrators to get them out of the car park to prevent them joining with other people who are already blockading the road entrance to the BAA HQ.

http://www.indymedia.org.uk/media/2007/08//379050.mp4
Kids March, a view of the site, general march chilled action, and the BAA offices protected by Police

http://www.indymedia.org.uk/media/2007/08//378904.mp4
This video shows protesters heading towards the HQ of BAA from the Climate Camp. They fan out when they pass the Police line to draw their escorts in different locations.

http://www.indymedia.org.uk/media/2007/08//378850.mp4
A quick video of a group leaving the climate camp on the day of action. There are some fully colourful "shields" with the images of young people from the global south leading the group.

http://www.youtube.com/watch?v=ZlPrgLtcDcs&mode=related...arch=
Interview with a local resident of Sipson, the village where 750 houses are to be demolished to make way for the third runway by BAA at Heathrow airport.

http://www.youtube.com/watch?v=p--Bb2Nf5eE&mode=related...arch=
Monbiot commits himself to DA

Colourful scenes at day of protest

The new face of activism

http://commentisfree.guardian.co.uk/george_monbiot/2007....html
The people who set up the Heathrow climate camp are neat, articulate and frighteningly well-organised. What is the world coming to?

A different kind of turbulence

Inside Heathrow's protest camp: A battle to save the world

http://news.independent.co.uk/uk/transport/article28741...3.ece
I discovered they have one purpose: to urge us to listen to the world's scientists and cut back on our greenhouse gas emissions - before we descend into climate chaos we cannot reverse and may not survive.

At one end, Mayer Hillman, the 76-year-old climate-change campaigner, is saying to a crowd: "We are on a trajectory towards the extinction of life on earth. In the main, people have done this unwittingly, so it can be excused. But now we know what we are doing, and it cannot be excused."

Leading Article: The flight from truth about climate change

http://comment.independent.co.uk/leading_articles/artic...2.ece
this was an overwhelmingly peaceful protest, in practice as in conception.

http://news.independent.co.uk/uk/transport/article28787...4.ece
Their mission: to highlight the link between global warming and aviation emissions - and to do it with posters, banners and a healthy dose of purposeful rebellion.

Johan Hari: Why we should all start shouting about airport expansion

http://news.independent.co.uk/uk/transport/article28787...3.ece
The science shows unequivocally that every airport is a minor act of ecocide,
If the protesters - and the millions who can grasp the science they cite - cannot stop the expansion of air travel now, we will guarantee that Britain is unable to meet even the most measly carbon emissions targets. We will then feel our planet transform beneath our feet into a boiling, belching rock we do not recognise. That is why the protesters are at Heathrow - and that is why they are right.

http://www.ireland.com/newspaper/breaking/2007/0813/bre...1.htm
The expansion of the airport just runs completely in the face of everything we know about climate change