Climate Camp: Down With the Eastside

From 3rd-11th August 2008, the Camp For Climate Action is being held in Kingsnorth, Kent near the proposed site of the first coal-fired power station in the UK since 1984.

Notingham residents are amongst those participating in the camp, organising themselves as part of the Eastside "neighbourhood" which also includes the good citizens of other Eastern parts of the country including Derby, Cambridge and Norfolk. Unfortunately, a Nottingham man is among those who have fallen victim to overzealous policing and was arrested, accused of "possession of a bladed article" (hardly an unusual situation for a camper). 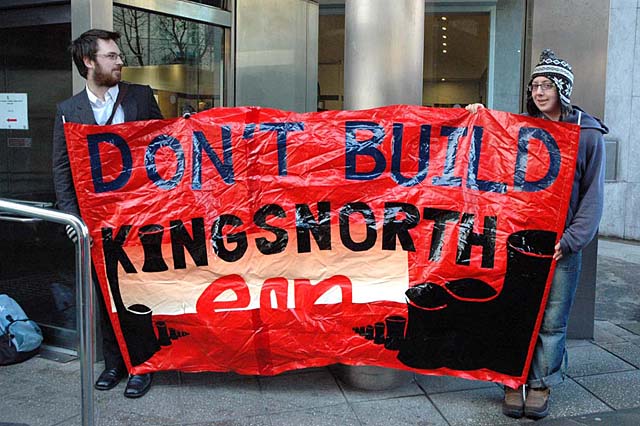 Nottingham has a very active movement against climate change and there's been a huge amount of stuff happening in and around Nottingham since last year's camp.

One of the biggest climate-related stories has been the court case of the Ratcliffe 11. In April 2007, they had entered Ratcliffe-on-Soar power station and locked onto equipment, forcing it to stop for several hours. The action, part of the Spring Into Action week of events around climate change sought to raise awareness of coal's contribution to global warming, but also to have a direct impact on the amount of CO2 being put into the atmosphere.

After a number of hearings, the court case took place in January. The defendants called an expert witness; a climate scientist, and Royal Society Research Fellow, in an attempt to prove to the court the scale and imminence of the threat that climate change poses.

One of the defendants had the case against him dropped due to lack of evidence, but the remaining ten returned to court on February 25th for the judgement

In October, activists targetted Europe's largest ever bio-fuels conference which taking place at Newark showground. there was a protest outside the event, while inside, BP's CEO was pied. Protesters were concerned about the way agro-fuels have been presented as a solution to climate change while they drive deforestation exacerbating the problem at the same time as pushing up food prices at the expense of the world's poorest people.

In the run-up to the climate camp, climate activists called for three days of action around climate change at the start of April, May and June. In Nottingham "Fossil Fools Day" was marked by a blockade of power company E.ON's offices on Mount Street in order to stop workers getting into the office in the morning. After negotiation it was agreed with police that people would unlock themselves at 10am and be allowed to leave. However, a few minutes before the deadline, the police arrested two people who were locked onto the front entrance. While under arrest, both had their homes raided by police.

The second day of action to coincide with Mayday wasn't marked in Nottingham. The third, drawing out the links between climate change and the food we eat, took place on June 3 to coincide with UN Conference on World Food Security and Climate. In Nottingham, climate campaigners and animal rights activists came together to distribute free food in the rain outside Victoria Centre. This have been only one of a number of other free food giveaways in the city (the most recent happening on July 31st), with more planned and a Food Not Bombs group in the pipeline.

One of the biggest climate related issues in the area has been the Lodge House open cast coal mine site near Smalley in Derbyshire. The campaign against the proposed open cast coal mine began with a mass trespass in May followed by a noise demo at the offices of UK Coal. Concerned that this as insufficient, campaigners occupied the land squatting a disused farm building. After a first farcical court hearing, the owners were able to secure a legal notice for eviction which they decided to enforce while climate camp was taking place and activists' attention was focused elsewhere.

There has been a huge amount of work done in preparation for the climate camp by local activists both in organising the whole site and in ensuring that things were ready for the Eastside neighbourhood. Transport has been arranged, equipment sorted and money raised. The latter was the inspiration for the hugely successful and sure to be repeated Sumac Garden Party, which saw several hundred people enjoying music and food in the sun in the Sumac Centre yard.