SchNEWS: One Strike and You're Out?

Wednesday's N30 strikes saw 2 million public sector workers striking and hundreds of thousands marching in Britain's streets all over the country, marking the biggest strike in a generation.

Demonstrations and pickets were held in nearly every major town across the UK, with the largest gatherings seeing 30,000 in London, 20,000 in Manchester, 15,000 in Birmingham and 10,000 in Edinburgh and Glasgow. More than 6 out of 10 schools were closed for the day and some activists from Occupy London stormed the offices of the UK's highest paid CEO, Mick Davis, head of Xstrata mining corporation. Reports are of 75 arrests in total, most of them around the occupation of the Xstrata office and in Hackney, after some demonstrators were kettled for four hours, then taken into custody on 'suspicion of breach of the peace'. [More] 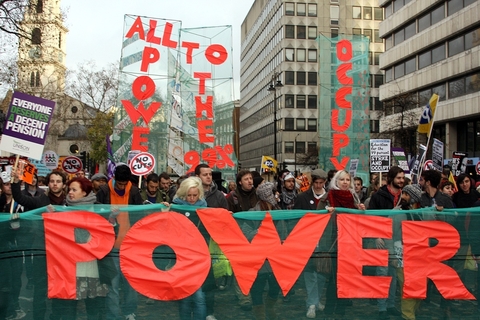 The action by Occupy London saw around 300 protesters, and a samba band, split off from the main march and approach Panton House, where Xstrata's offices are based. About 60 people managed to gain entrance to the building in Haymarket and unfurled a banner saying “All power to the 99%” from the roof”. Once the police caught up with them some left by their own accord, leaving twenty inside to try and hold the space. They were violently arrested by police and taken outside to the sight of hundreds from the march who had joined to show solidarity and been kettled. Mick Davies was the highest 'compensated' executive in the FTSE 100 in 2011, receiving nearly £18.5million for his efforts as his company lost money and the economy collapsed.

David Cameron did his best to stop his lip from wobbling as he branded the nation's actions as a 'damp squib', declaring that the industrial action would have no effect whatsoever on austerity measures, stating “Britain must live within its means”. If the highest ranking politicians, bankers and businessmen in this country had managed to learn how to do that, it's possible the crippling cuts to essential public services might not be quite so “necessary”.

Despite the devil-may-care attitude, the government has since become a little more uncertain on reaching a definitive plan for the cuts by the end of the year. Ministers leading the pensions talks between government and the unions had, up until the strikes, been hardline in their commitment to reaching an agreement before January 2012. The word now coming out of Downing Street is that no deadline has been set, and they are hoping for a resolution by the end of the year if “unions and government negotiators engaged in a very positive manner”.

Also in SchNews this week: | Back on the Frack | Rogues Gallery | The Forest Recommission | Greenpeace of The Action | Thou Shalt Notts Squat | U-Boat If You Want To | City BNP Rabbit Sex Shame